'A Brexmas Carol' Part Three: the past and the present catch up with Ebetheresa... - Canary 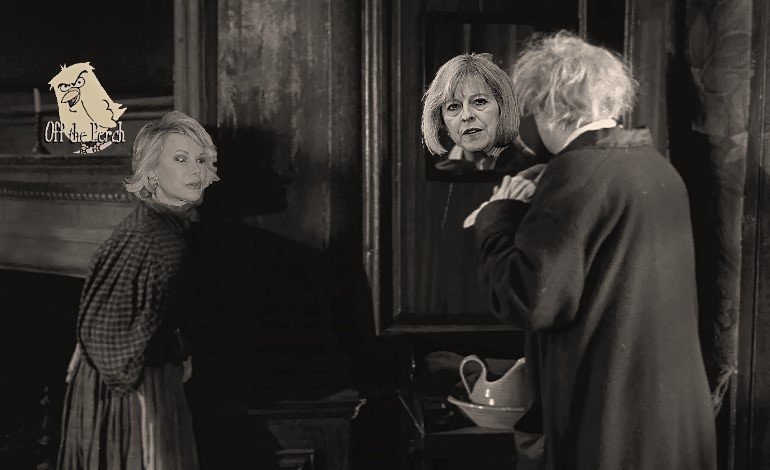 We left you, dear reader, observing a terrified Ebetheresa Scrooge. Having just been visited by the ghost of Margaret Thatcher, Scrooge now has Joan Rivers, the Ghost of Christmas Past, flying through her nets…

“The very same,” Rivers drawled in her customary Brooklyn twang. “I told you – I told you all! When I died they did donate my body to Tupperware! Any-hoo…”

Rivers cleared her throat, and assumed the timbre of a colloquial English gentleman. “I am the Ghost of Christmas Past,” she said.

Rivers looked down. “Well, these two puppies came with a forty-year guarantee, so I… ANYWAY!” Assuming the same, genteel resonance, she exclaimed “Your past, Ebetheresa! I am here for your welfare! Your reclamation! So take heed! Rise! And walk with me!”

Scrooge and Rivers passed through the wall and were suddenly traversing a snow-covered country road. Scrooge recognised every twist and turn of the lane, until a sight befell her eyes that brought tears to them.

“My wheat fields! Oh! My wheat fields!” exclaimed Scrooge, then also noticing the school she went to. She was her younger self, fox hunting with children who were in great spirits; shouting until the broad fields were so full of merry music, blood and guts that the crisp air laughed to hear it.

“These are but shadows of the things that have been,” said Rivers.

“Much like my parliamentary majority,” wept Scrooge. Rivers showed her more and more memories: her father’s vicarage; the Oxford University Conservative Club; her husband putting out the bins – until Scrooge could bear it no more.

“Remove me!” Scrooge exclaimed. “I cannot bear it!”

Again Scrooge saw herself. She was older now. She was not alone, but sitting by a pretty young man: in his eyes there were tears. “It matters little to you,” a young David Cameron said, softly. “Another idol has taken my place. It is the love of Brexit. Goodbye. May you be happy in the life you have chosen!”

“Leave me! Take me back. Haunt me no longer!” cried Scrooge. And as quickly as Rivers appeared, she was gone. And Scrooge was back in her bed, weary – falling into another deep sleep…

Awaking in the middle of a prodigiously tough snore, Scrooge saw a light coming from the next room as the clock again struck one. A strange voice called her by her name, and bade her enter. She obeyed and saw her own room – but not as she remembered it. Holly and mistletoe hung in every direction and a roaring blaze bellowed up the chimney. And sitting by the hearth was a grand figure of a man:

“Come IN,” bellowed the gent, “and know me better!”

Part Four of ‘A Brexmas Carol’ is out on Friday 22 December. You can read Part One here and Part Two here.