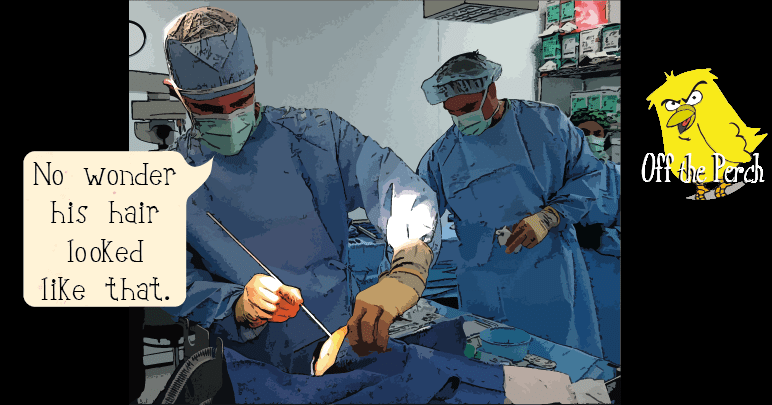 When President Trump saw the NHS marches, he incorrectly assumed that Britons were against national health. In response, some NHS proctologists have identified that Mr Trump may have an ailment called headup arsitis.

The good news for him is that they’ve offered to fix it for free.

There was obviously something wrong, as no one marches against free health coverage. Other than the people who profit from insurance scams, obviously. Although you wouldn’t catch them out marching, as then we’d know who they are and what they look like.

When our world-class doctors met with Trump, the problem was obvious.

“He had his head stuck up his arse,” the lead proctologist explained.

Although the operation should have been quite simple, it was hampered by the fact that Piers Morgan’s head was up there too.

“We’re homophobic because you stuck your head up his arse?” a confused doctor asked.

“Exactly,” Morgan said – his words coming out rasped and smelly.

“I think you might be confused,” the doctor said. “Because gay people don’t generally stick their heads up each other’s arses. Although people with a condition called spineless suckupecia often do.”

As soon as Trump had had his head removed from his anus, he realised how great national medicine was. He also realised how terrible everything he’d ever said and done had been.

Many of Trump’s supporters, however, are refusing to come out. And even though it stinks up there, the gold-plated walls do give a veneer of class.