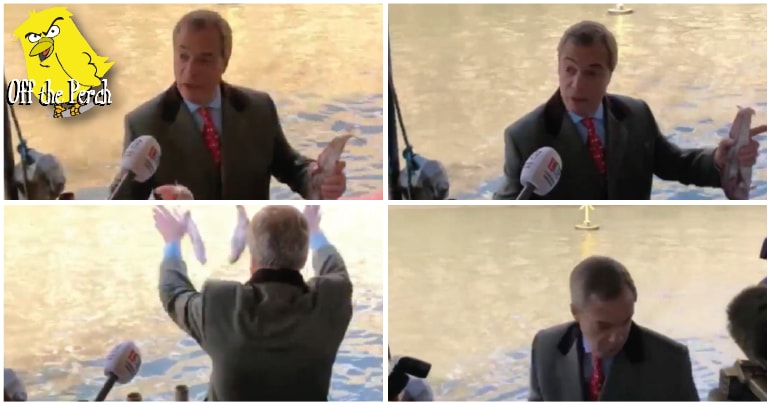 You may know Nigel Farage best for his speeches at far-right rallies or his unwavering support of this guy.

What’s less well known is that he actually has a rare medical condition. A condition which means his skin will turn inside out if he goes two days without publicly humiliating himself.

And presumably, this is what led to his latest endeavour.

Farage declares war on the fish

Farage summoned a gaggle of journalists to his boat the S.S. Cunty Snark. He told them:

People have often told me that I have the face of a trout.

But do you know who really have the faces of trout?

And I just won’t take it any longer!

Farage then produced a live fish which he proceeded to punch to death with his pale fists. When his gawping foe was slain, the pinstriped warrior tossed the corpse like it was yesterday’s Daily Express.

A confused journalist asked if this was another display of ultra-nationalism – like when Farage declared war on migratory birds.

His speech over, the former UKIP leader gripped a Bowie knife between his teeth and leapt into the Thames. He then spent the next hour splashing about and punching the water. There were no reported casualties.

So long, and thanks for all the fash!

Some people mistakenly thought the display was a protest against EU fishing lanes. But obviously, that’s somewhat preposterous. Because if Farage cared about British fishing, he wouldn’t have attended only one meeting out of 42 when he was a member of the European Parliament Fisheries Committee.