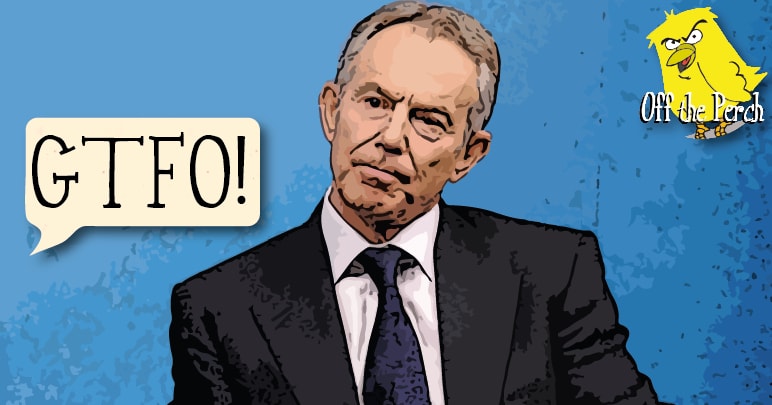 Whenever there’s a sniff of war, Tony Blair appears like Pennywise the Clown to whisper sweet war-mongerings into the ear of anyone who’ll listen.

This time, however, people are asking a very pertinent question. Namely:

If you want war so much, Tony, why don’t you fuck off and wage it yourself?

And it wasn’t an inevitable disaster either. Because it was sold to us on what can only be politely referred to as ‘total, total bollocks’.

The investigation into it by John Chilcot concluded that:

Tony Blair is a malicious and manipulative horror-puppet who sold us a fake war to impress his friend George Bush – a world famous idiot and shitehawk.

This is like Sepp Blatter giving advice on ethical business practices. It’s like that co-worker who got caught wanking in the toilets lecturing you on social etiquette! IT’S LIKE TONY “WAR BASTARD” BLAIR TELLING PEOPLE TO START ANOTHER BASTARDING WAR!!!

Rather than waiting for Blair to fight for his own warped principles, people are crowd-funding a plane ticket for him. The first attempt on Kickstarter had to be cancelled though, as people incorrectly thought they were paying to kick him.

Some centrists have questioned the benefit of sending an ageing disgrace into the world’s most confusing and rampant warzones.

Which is good – because it shows they’re becoming self-aware – and realising that SOMETIMES INTERVENTION ONLY MAKES THINGS WORSE.