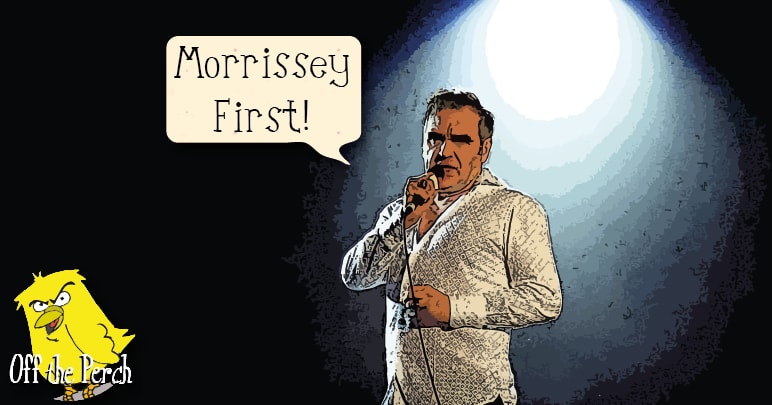 In the 1980s, Morrissey wrote songs with a lyrical grace and sensitivity that were in stark contrast to the binary machismo of rock’s past.

In the 2010s, Morrissey writes tweets with the compassion of a nail bomb and the wit of a whoopee cushion.

As such, the far right were quick to jump on his anti-PC shtick. They’ve been less quick to join his new political party, however. As it turns out his beliefs don’t entirely sync up.

Morrissey’s new party is called Morrissey First!. Its aims are to further the beliefs of Morrissey and anyone who agrees with him.

The main aim of the party will be to send them back. But when I say them, who exactly do I mean?

Someone in attendance raised their hand to answer, leading to a swift castigation from Morrissey:

“Drop your fat fingers and leave, you showboating wretch!” he screamed at the confused man.

“It just makes me so angry!” Morrissey continued, as he caressed an egg he’d liberated from a nearby Tesco. “But anyway, when I say them, I am of course talking about Muslims!”

There were cheers in the crowd.

And anyone who poisons their body with the murderous flesh of animals!

The applause died down somewhat.

And anyone who’s against the exchange of bodily fluids between consenting adults!

The reverie from the right-wingers stopped completely when they realised this could condone gay stuff.

Eventually, the followers left were:

After the crowd was whittled down, Morrissey asked them what their favourite song of his was. When one person said Hand in Glove, a furious Morrissey chucked a daffodil at her and screamed:

He then wept openly for 45 minutes while attempting to breastfeed the egg he’d liberated.

“Why won’t it suckle!?” he shouted at the remaining members of Morrissey First! “It’s because of you! You beasts! You’ve killed him with your horribleness!”

After accidentally cracking the egg, Morrissey harangued the group’s remaining members until they fled in terror.

As bad as it was though, Morrissey First! is still expected to outperform UKIP in the local elections.