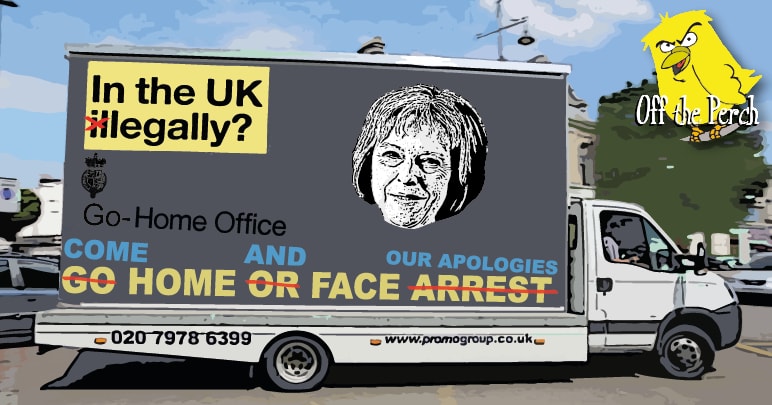 The prime minister may be terrible, but she does at least see her ideas through to their inevitable and farcical ends.

One such disaster was the ‘racist’ GO HOME vans. A disaster that was on everyone’s minds this week. Namely as another of May’s ‘racist’ policies resulted in targeted harassment of the legally British Windrush generation.

Despite previous failures, May has asserted that:

You simply cannot beat the warm, human touch of a van.

May wanted to speak to the victims of Grenfell tower via the medium of vans. The traffic was too bad though because of all the fire engines and displaced people.

In the end, she was forced to do the next best thing – stand very far away from residents and surround herself with emergency service workers.

The new vans are driving around helping people confirm their right to exist. As Prince Charles recently told a Manchester woman, some people just ‘don’t look British’. Black and minority ethnic people have only been living in the UK for a few centuries, after all, and it’s only right we expect them to prove their Britishness on demand.

Some people don’t believe the vans are here to help however. One resident told Off The Perch:

I saw in the back when they had the doors open. There were nets in there. I don’t think they’re to help with paperwork.

When it was revealed that the Home Office is literally snatching people as part of its ‘hostile environment’ programme, the many politicians who voted for this policy claimed to be “shocked”. May has also claimed to be “very sorry”.

We’re not sure if this message represents her true feelings, however, as she’s yet to inscribe it on a van.