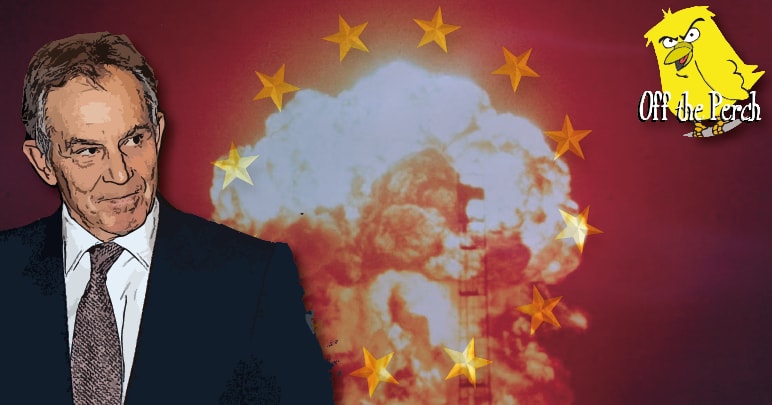 Not today, obviously, as he’s once more spoken out against Brexit.

Some pundits said we shouldn’t dismiss Blair out of hand:

If you don't agree with Tony Blair, fine. But construct an argument about why. Don't simply say "oh, it's Blair, so we can just dismiss".

The problem is – the people saying we shouldn’t dismiss Blair out of hand are also people you should really just dismiss out of hand.

But what did Blair say this time?

According to one person who saw him speak, Blair opened his mouth and proceeded to emit white noise for half an hour. This seemed unlikely, but when we looked at the video, it was true. Almost like Blair’s previous actions have made it impossible to listen to him.

Give war a chance

Maybe the horror-pricks are right, though? Maybe we should give Tony ’45 minutes to death’ Blair a chance?

We caught up with a psychologist to ask if it’s us with the problem:

Not really. Imagine if you bought a sausage roll from someone and discovered it had been purposefully stuffed with dog shit and syringes. Now imagine the baker who perpetrated this terrible snack offered you another.

Would you take a chance on it not being filled with filth and deception? Not fucking likely.

Brexit won by making people think the EU was bloated with out-of-touch elites who don’t care about those affected by austerity. This was easy to achieve, as it’s largely true.

But making people think we’re better off with the EU elites than the Tory ones isn’t helped by deploying more elites. Especially when said elite is Tony Blair.

Because don’t forget, Blair still thinks he ‘fixed’ Iraq. Do you really want him ‘fixing’ Britain?