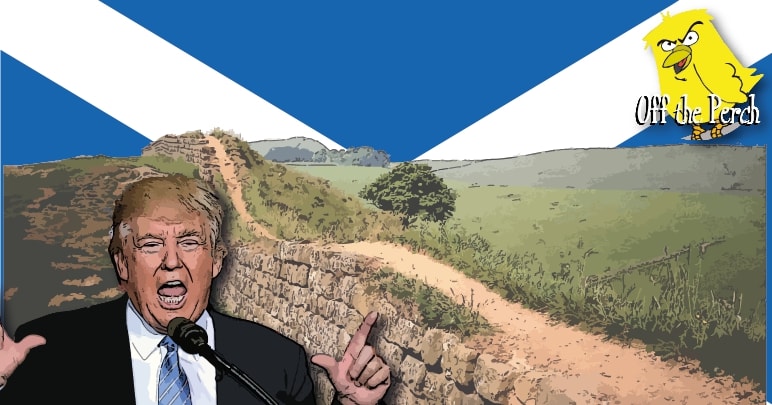 Emperor Hadrian had a simple dream:

The Roman Empire is going to build a wall, and the Celts are paying for it!

Despite this mighty wall, a conniving orange migrant has somehow managed to slip into Scotland.

These orange people are animals. Seriously. It’s an invasion. You should see how these people treat their women. And crime? Bigly these orange windbags do crime.

It’s a great shame. They’re coming over here to try and change the way we live. The sad fact is America just isn’t sending us its best people.

Sturgeon’s warning has proven true; the shifty, migrant chancer is trying to change the UK. So far, since getting here, he’s shown no regard for any of our traditions. That’s why he:

About the only tradition he upheld was acknowledging the protests against him made him feel “unwelcome”. No fucking shit, Sherlock. THEY WERE PROTESTING AGAINST YOU.

If we’d allowed this comb-over interloper to completely change our culture, we’d have detained him at the border, separated him from his children, and banged them all in a cage.