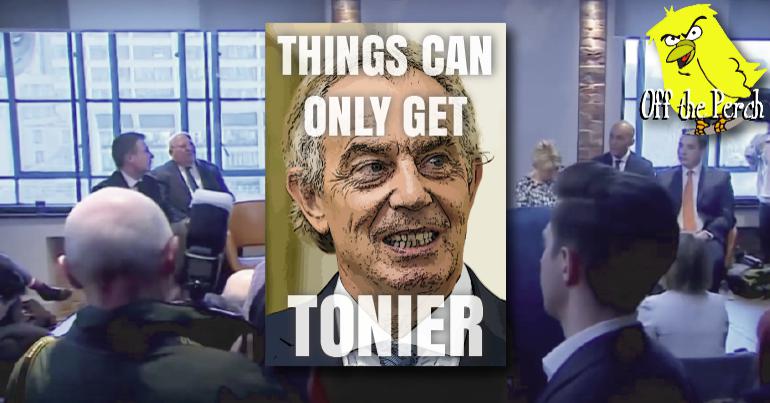 After years of speculation, failed attempts and botches, seven Labour MPs have finally left the party. They’ve done so to reverse Brexit in the…

…hang on a minute…

Looking again, they actually haven’t promised to reverse Brexit. Wasn’t that the only issue they had any actual fucking plan for?

Is this a joke?

Things Can Only Get Tonier

As it turns out, the Independent Group manifesto is just Tony Blair’s last autobiography. They have at least highlighted the relevant passages, so we have some idea what they’re going for. The highlighted bits include:

They say that privatisation doesn’t work – that it only benefits a small handful of shareholders. People said the same thing about me, though, and I won three consecutive elections.

Borders are crucial to any functioning nation. Ideally, our borders should be in the middle of other people’s countries. You really can’t be too sure.

People in the UK don’t want ideology – they want bland statements that mask the underlying neoliberalism you’re pushing through at every given opportunity.

To be fair, the Independent Group has also committed itself towards ‘fresh ideas’. Promising ‘fresh ideas’ is a notion they took from Blair’s other book – the one titled Fairness and how to beat it.

Featured image via YouTube / Cabinet of Ministers of Ukraine – Wikimedia