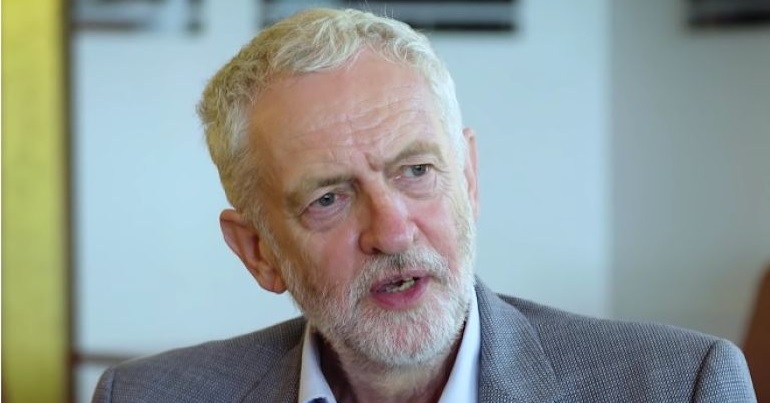 Jeremy Corbyn opposes the structures of racism in British politics. That’s why political elites see him as a threat – and why their attempt to smear him as an enabler of racism is so absurd.

Anti-racists must resist attempts to get rid of him on these grounds.

Corbyn as a threat to imperialist racism

In the decades since World War II, says historian Mark Curtis, British foreign intervention has directly or indirectly caused the deaths of around 10 million people.

If an alien were to visit planet Earth and review British foreign policy over these years, they would have no means of telling that political power in Britain ever changes hands. British imperialism, in other words, is a cross-party project. And it’s grounded in an institutional racism – one that, according to Curtis, reduces foreign humans to “Unpeople – those whose lives are seen as expendable in the pursuit of Britain’s economic and political goals”.

Jeremy Corbyn is the nearest that an anti-imperialist British politician has ever come to derailing this racist system. In a parallel universe where racism was the real concern of the British political and media establishment, this would dominate public conversation. Instead, we relentlessly hear of a ‘crisis’ of antisemitism in the Labour Party – led by the liberal imperialists at the Guardian – which seeks to make a Corbyn government an impossibility and frame the wider movement around him as racist.

And it’s working. Around 27% of the UK public think Corbyn is an antisemite (incidentally around the same proportion of the population that trusts “the media in general”), and false accusations of antisemitism are toppling key Corbyn allies. Now, in the words of journalist Jonathan Cook, “the witchfinders are… ready to burn Corbyn”.

The attacks on Corbyn should horrify all anti-racists

Anti-racists should be horrified by this for three reasons.

Firstly, manufacturing a ‘crisis’ of “rampant” and “institutional” antisemitism (the number of accusations of antisemitism relate to 0.08% of the Labour Party membership – less than the average across British society) both dilutes the power of the word and undermines the credibility of genuine accusations within the Labour Party. Of course, one case of antisemitism is one too many and must be dealt with. But the wildly disproportionate response suggests these arguments are being made in bad faith. And as Jewish Voice for Labour wrote:

Crying wolf is dangerous when there are real wolves around the corner.

Secondly, the Israeli government has for years lobbied “for the inclusion of criticism of Israel in laws against anti-Semitism in Europe and the United States of America”. As James Wright wrote for The Canary, meanwhile, “Israel’s strategic affairs ministry has an outright ‘black ops’ policy of smearing the Palestine solidarity movement”. So Israel is clearly seeking to weaponise antisemitism to silence legitimate criticism of its actions.

Thirdly, the smear campaign’s main target is one of the most fervent anti-racists in British politics. To quote Malcolm X:

The media’s the most powerful entity on earth. They have the power to make the innocent guilty and to make the guilty innocent, and that’s power.

Foreign policy is the area of government with the greatest potential for death and destruction. So keeping Corbyn out of Downing Street will likely have fatal consequences for the “unpeople” being gunned down with British-made arms; for the invisible victims of Britain’s future imperialist conquests. And that includes Palestinians.

On 28 February, a UN Human Rights Council inquiry found that Israeli soldiers may have committed “war crimes” during 2018 by murdering Palestinian civilians including paramedics, journalists, and children. For many people following events in Palestine, the only surprising part of the report were the words “may have”.

Every Friday since 30 March 2018, Palestinians have demanded their right to refugee status and the end of the “prison” conditions imposed on Gaza by Israel and Egypt. Israeli soldiers have often responded by gunning them down. On 1 March 2019, the day after the publication of the UN report, Israeli forces reportedly injured a further 17 Palestinian protesters.

The protests are born of Israel’s racist treatment of Palestinians and its imposition of apartheid. As Jewish intellectual Noam Chomsky wrote in 1992:

If we’re not racists, then the indigenous [Palestinian] population has the same rights of self-determination as the settlers who replaced them.

Corbyn is an outlier in the Labour Party, which has historically offered assistance to Israel during attacks on its neighbours. As Corbyn told then-PM Tony Blair in 2002:

The only way for a long-term, realistic peace in the region is for Israel to withdraw from Palestine; to accept United Nations resolutions on Palestinian self-determination; allow an independent… investigation into the massacres of Jenin; and to recognise a Palestinian state. And until that position has been achieved, will he ensure that the British government ceases all arms sales to Israel?

Britain’s collusion in Israeli war crimes is longstanding, yet barely reported in the corporate media. In 2016 and 2017, the UK sold over £400m worth of military goods to Israel. Further export licences were approved in June 2018, at a time when the British state was surely aware that they could be used to murder Palestinian protesters.

The British government is, therefore, assisting a state allegedly involved in racist war crimes, while the British establishment stages a ‘crisis’ of antisemitism against one of the few people seeking to address this. This is the absurd and cynical inversion of ‘anti-racism’ that we’re currently seeing across British politics.

The UK’s foreign policy record on Israel – supporting an oppressive state with no apparent concern for the human consequences – is nothing new; it’s consistent with British foreign policy worldwide.

It’s almost like the British corporate media and political elite care less about racism than getting rid of Corbyn.

Indeed, many of those who enthusiastically backed the disastrous invasion of Iraq are the same people slandering Corbyn with charges of racism and antisemitism. Mike Gapes MP, for instance, is now in charge of “foreign affairs and defence” for the newly formed Independent Group. Gapes left the Labour Party on 18 February, saying he was “sickened that Labour is now perceived by many as a racist, anti-Semitic party”. Despite the many hundreds of thousands of Iraqi casualties and the invasion of Iraq leaving the country in ruin, Gapes still believes it wasn’t a mistake.

Ultimately, we mustn’t lose sight of the fact that Corbyn threatens to dismantle the racist structures of polite British political culture that offer legitimacy to politicians like Gapes and Tony Blair. Though the odds are stacked against Corbyn, that’s a revolution worth fighting for.