As The Canary reaches its 10,000th article, a reminder of why, and how, we do what we do - The Canary 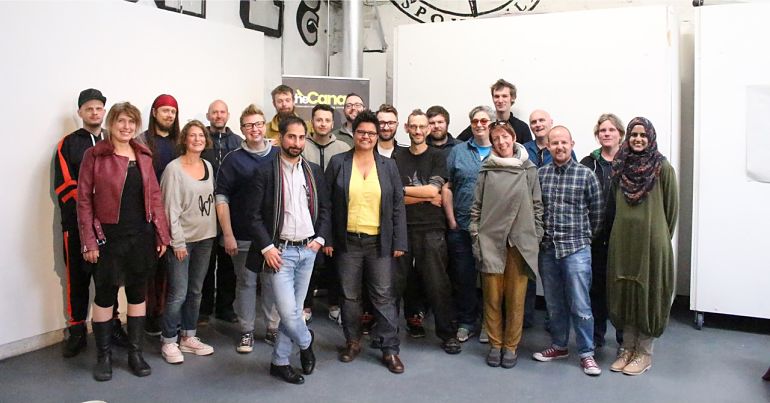 We started The Canary in October 2015. Now, nearly three-and-a-half years later, this is our 10,000th article. It’s been an extraordinary ride and we remain as committed to our founding vision as ever. We want to see a better world. And we want to help bring that about by informing and empowering people with high-quality campaigning journalism.

The media, both in the UK and throughout much of the world, remains dominated by a few big players. This limits the range of viewpoints on offer. Added to this, the majority of London-based media people come from a relatively narrow set of backgrounds. There are exceptions, of course, but as Canary editor-in-chief Kerry-Anne Mendoza said on BBC Newsnight in 2016:

We have a situation in this country where 81% of the mainstream media is owned by six corporations. Most of the journalists who staff them went to a handful of universities and graduated about six inches to the left or the right of each other politically.

That ‘foot-wide window of acceptability’ has missed out most of current Labour Party politics and certainly anything further left. So it’s vital that other media outlets occupy that space. Otherwise, it goes unreported or misreported. The Canary is in no way party political. We don’t take orders from Jeremy Corbyn’s office, or from anyone. But frequently, we’ve had to provide coverage of good things Labour has done in order to balance the overwhelming onslaughts coming from most of the media.

The 2017 general election was the first in modern UK history that the national newspapers couldn’t control. The Canary reached nearly eight million users during the campaign. Shortly after the election, our trailing monthly stats put us just outside the top 250 of all websites in the UK: 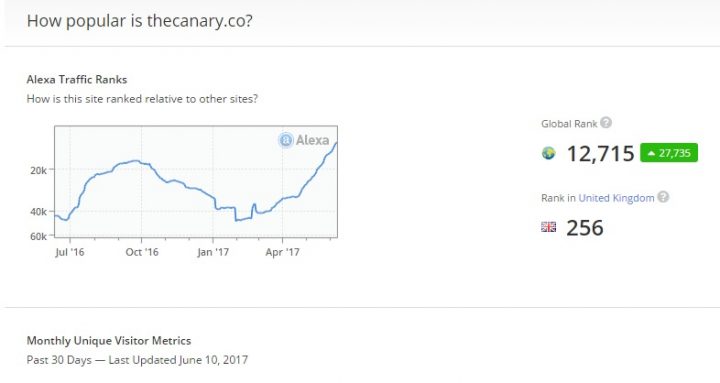 Another Angry Voice, meanwhile, had the most shared article on Facebook of any outlet. And Skwawkbox, Evolve Politics, Novara Media, and others all contributed to a dramatic shift in the media’s balance of influence. Together, we helped a people-powered Labour campaign defy the polls and transform the national debate. It came within a whisker of defeating a Conservative Party unanimously expected to win a landslide. Theresa May’s leadership was fatally damaged and only persists, zombie-like, because no other Tory will accept the poisoned chalice.

We had a feeling from the start that not everyone would welcome The Canary with open arms. The very fact of our existence suggests a criticism of the existing media. Even within left-wing publishing, we were seeking to do something new, and were aware we might put some noses out of joint.

We’d only been running for about four months when the Telegraph branded us “the maddest Left-wing website in the world”. We were delighted at being named the ‘most something in the world’. As a four-month-old £500 start-up, it felt pretty good.

It’s been a whole lot tougher, though, to read accusations that The Canary ‘peddles conspiracy theories’ or that it ‘supports antisemitism’. We know that neither charge has the slightest basis in truth. And such allegations fall apart the moment people actually read our output and look at what we’re about. But we know that, behind such claims, there’s a background of real concern about these issues. There are fears that antisemitism isn’t being taken as seriously as it should be, and worries that the new world of digital media allows lies to spread like wildfire.

Part of the union

We set up The Canary with serious intentions and a keen awareness of our responsibilities. We’ve used the National Union of Journalists (NUJ) code of conduct as the bedrock of our practices since the start. We’ve also encouraged all our contributors to join the NUJ and get active in their local branches. I’m proud to be vice-chair of the Norfolk group, for example. My branch also sent me to the national Delegate Meeting and nominated me to serve as New Media representative on the NUJ’s Ethics Council. These roles not only give me great support as someone who, like all Canaries, works remotely. They also keep me up to speed with current issues in the industry.

We also knew that we would benefit from external regulation. So when Impress set up as a genuinely independent body, it was an easy decision to make. Impress has so far investigated one complaint against us and its judgment was that we should make changes to our article. We were happy to do so, although obviously disappointed that the situation had arisen. As well as making fully explained changes to the original piece, we also published a new article to draw attention to the correction. We shared this through our social media channels just as prominently as any other story. The judgment confirmed to us that Impress is a properly robust regulator that we can trust to hold us to account where necessary.

As we’ve grown, we’ve also learned. We have a culture of continuous improvement, and all the team are encouraged to share ideas on anything we can do better. We have a rigorous editorial process which is the envy of many who’ve seen their own organisations prioritise cost savings over quality. Because of the scrutiny levelled at us, it’s vital that we work to high standards of accuracy and quality. But we would do it anyway. Our aim has always been to inform and empower, and trying to do that with inaccurate stories would be pointless and fruitless. We don’t have high standards just so we can tick boxes. We have high standards because it’s who we are.

Featured image by Andrew Butler for The Canary