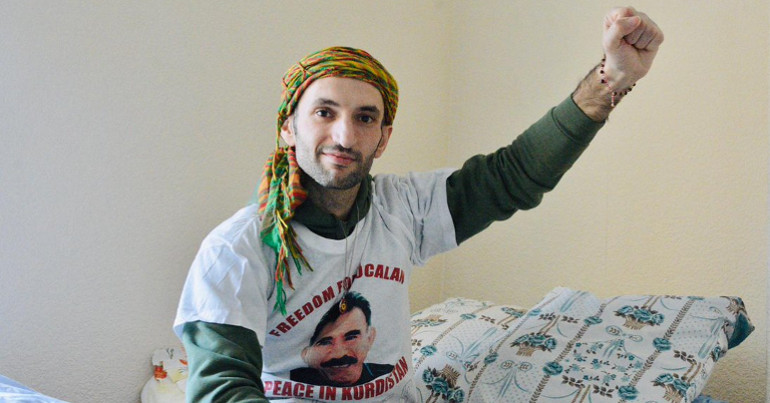 As Kurdish hunger strikers in Britain and around the world get closer to death, the UK government needs to urgently take some responsibility. Thousands of hunger strikers are ready to sacrifice their lives to protest the solitary confinement of Kurdish leader Abdullah Öcalan. And many are now in a very critical condition. Yet Theresa May’s government continues to cosy up to the brutal Turkish regime responsible for his isolation.

“When you can’t get freedom, you have to struggle”

Ilhan Sis (also known as Imam) has been on hunger strike for almost 140 days. The Canary met Sis in his room at the Kurdish Community Centre in Newport, Wales. His body is now just skin and bones, but his mind is sharp. He has an unwavering determination to continue his hunger strike to the end. Sis stated back in February:

When you can’t get freedom, you have to struggle – to struggle seriously… I don’t want to die, who wants to die? We love life so much that we will die for it.

“Imam is a very intelligent activist and socialist,” his friend Baris Aksoy told us. He continued:

He’s always been an anti-capitalist. He knows every word of Öcalan’s books. We first started the Kurdish Assembly together in Wales, and in 2017 October we opened the Kurdish Community Centre in Newport.

But he is now too sick to have more visitors. Sis told us that his bones and muscles hurt and that talking to people makes him exhausted.

(NEWPORT) Imam Sis' condition is CRITICAL. He is no longer able to see visitors. He is on DAY 137 of his hunger strike to #EndTheIsolation of Abdullah Öcalan

European governments will have blood on their hands

For months, activists have been calling on European governments and bodies to speak out against the Turkish government and force it to end Öcalan’s solitary confinement.

But the UK government has no interest in criticising its strategic ally, no matter how fascist it gets. It would rather watch Sis slowly die. After all, the UK is one of the biggest arms exporters in the world, and Turkey is one of its priority markets. Turkey’s military spending, meanwhile, increased by 24% in 2018 to $19.0bn. According to the Stockholm International Peace Research Institute, this was the highest annual percentage increase among the world’s top 15 military spenders.

Turkey continues to occupy Afrin in northern Syria. And it’s arming itself with an eye to destroying the rest of the majority-Kurdish Rojava region of northern Syria. British arms companies, meanwhile, continue to rake in the profits.

As Aksoy told The Canary:

Theresa May’s husband profits [indirectly] from [the] selling [of] weapons. The UK sells weapons to everyone and doesn’t say they’re terrorists. But when Kurdish people are fighting for security in our land, to protect our lives, we’re called terrorists.

The European Parliament is also going to be responsible for the hunger strikers who lose their lives. And Britain – which divided up Kurdistan [along with France] – will be responsible. Britain has a good relationship with Turkey. It needs to push Turkey to stop killing Kurds.

The hunger strikers have made constant requests to the European Committee for the Prevention of Torture (CPT) to visit Öcalan in prison and to put pressure on Turkey. The Canary requested a meeting with the CPT, which responded bluntly that it is not in a position to comment. It said:

The work of the CPT is confidential and we therefore cannot provide any further details at this stage.

The Welsh government calls for action

BREAKING NEWS@Eluned_Morgan the Welsh Government's Minister for International Relations has written to @Jeremy_Hunt urging the UK Gov to urgently contact the @CoE_CPT re: the illegal conditions of Abduallah Öcalan#EndTheIsolation #TwitterKurds #ResistanceIsLife pic.twitter.com/7OOKa6ZwNk

Öcalan’s writings have inspired Kurdish people to be critical of capitalism and to organise society through an alternative, grassroots system. This movement is called democratic confederalism. As it grows in popularity, Europe’s capitalists must see this as a real threat to the status quo.

Democratic confederalism brings together all democratic, socialist and anarchist groups. We have broken capitalism down and we have organised politically and economically. So European governments are scared – especially Britain and Germany. That’s why they don’t want Öcalan to have visits in prison.

As time runs out, activists in Wales are making yet another plea for people to take action.

Many people are going to die. We’re going to lose all these lovely people. When these people die, it will mean that humanity has died.