Danny Baker's final apology, and what the reaction to it tells us about racism - The Canary 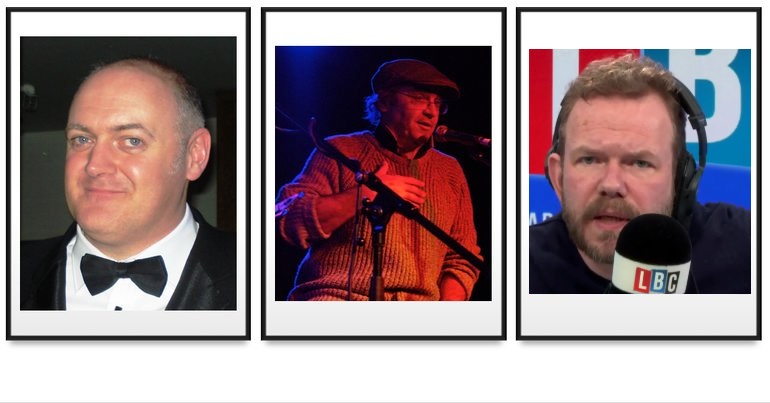 This week, the BBC fired Danny Baker for his racist tweet about the latest royal baby. Almost immediately, the Centrist light entertainment luvvies swamped Twitter with apologia. He’s such a great guy! He’s been the victim of a politically correct Twitter hit mob! He was taken out of context! The excuses were endless. But due to the resistance of black Twitter and allies, Baker was forced to reflect further and make a fullsome apology. The whole debacle and its aftermath can teach us a lot about how racism works. If we’re prepared to listen. 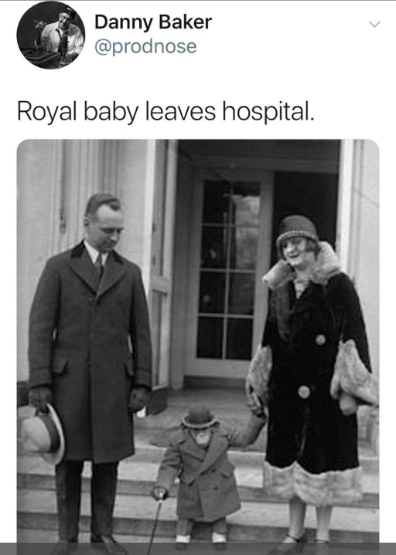 Portraying a mixed race child as a chimpanzee is racist. It’s an age-old trope that any person who’s stood in a football ground, playground, pub or changing room knows about. It played like a broken record through my childhood. You’ll find it near-impossible to find a person of colour who evaded it. But abuse is only part of the racism game. Then comes the gaslighting. And for me, this is the truly stomach-churning part.

As a person of colour encountering this kind of abuse, you face a crossroads. Swallow the bitter pill and act like nothing happened, or confront it. Either way, in a group of non-allied white people, the racist wins. If you say nothing, you both know there will be more of it to come. Confront it, and you face the wrath of the group.

There’s no way to ‘prove’ racist intent. And so those who find the abuser likeable give them the benefit of the doubt. They haven’t lived through this scenario a hundred times over in their lives, and so they (knowingly or otherwise) perpetuate the abuse by further alienating the target. It’s gross.

I once worked for a machine tools company in Brighton. It was a short term job before university, no big deal. During two separate conversations, in a single day, senior colleagues used the N word in a derogatory way without challenge from anyone.

I left work in tears. I felt desperate and alone. It wounded me to be so suddenly and forcibly reminded that I was ‘other’. I took a sick day or two to recuperate and consider what to do. And when I returned to work, I set up a meeting to discuss the issue. My bosses paused me halfway through and said:

Let me just check your understanding. You didn’t set up this meeting. We did. This is about your performance. We are letting you go.

Even though I knew full well I had arranged the meeting, I sat there in stunned silence and self-doubt. I liked these people. We’d had a great couple of months before this. We’d socialised outside of work at their invitation. They couldn’t possibly be doing this on purpose, could they? Yes. They could. And they did.

Not a single person in the office spoke to me (not a word or acknowledgement of my presence) outside of further meetings on the issue until I left. This took a month. Imagine that for a moment. A ghost in your own workplace, for a month. I was 18 years old. They were grown ups.

I made them pay. But it hurt.

This is exactly where Danny Baker went next. He gave a half-hearted, bogus apology, tweeting:

Sorry my gag pic of the little fella in the posh outfit has whipped some up. Never occurred to me because, well, mind not diseased.

Soon as those good enough to point out its possible connotations got in touch, down it came. And that’s it.

First, it didn’t ‘whip some up’. This is dismissing those he abused as over-emotional. He’s not taking responsibility at all. Next, he claims he’s so not racist, he was accidentally racist. If the idea never occurred to him (and I seriously doubt that) it’s not because he’s pure of heart. It’s because of his privilege. Failing to take responsibility for that renders the ‘apology’ null and void.

But given the guy is a comedian and a Millwall fan, I’ll call bullshit on the whole thing. He knew, and he did it anyway. As ITV news anchor Charlene White put it: 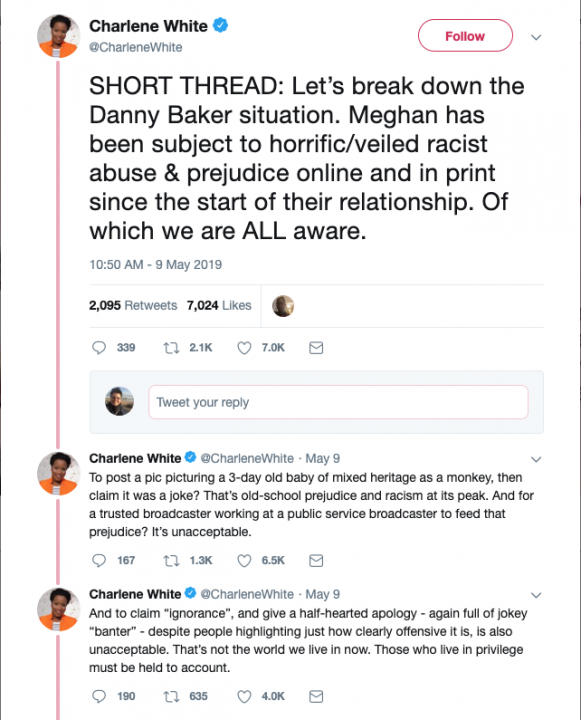 Baker’s next move was to paint himself as a martyr to the permanently outraged. Humourless offense-seekers were hounding him, and that’s the real problem here! Comedian Gina Yashere gave a one tweet masterclass in the appropriate response to that gaslighting:

Go fuck yourself. You gotta be deaf, blind, dumb & dead to not know posting a pic of a monkey in reference to the first black child in the royal family, or any black person is racist. U got drunk on yr own privilege

“To declare that someone is a racist is to say that their acts are motivated by a potent and purposeful racism.”

– no, that’s not true. Good grief. I was definitely homophobic in my mid-teens before I knew better. I was still a homophobe though.https://t.co/UiKPAEhzez

Unfortunately, Baker was able to rely on his friends to attempt to whitesplain this all away:

What? Danny Baker got fired? But he immediately apologised and deleted the tweet! I mean, literally, in the event of mistakenly causing offence, what else can you do? Genuinely amazed by that.

LBC broadcaster James O’Brien gave an ultra-sympathetic interview to Baker. The same O’Brien busy hurling accusations of antisemitism at lifelong anti-racist Jeremy Corbyn and anyone around him? Yes, same guy:

I don’t think that that [racial subtext] was even close to Danny Baker’s brain when he sent that tweet because he does loads of stuff about monkeys and apes dressed as human beings.

The massive racist history of conflation of gorillas and apes with people of colour is disgusting and I’m afraid it’s… a matter of historical record.

But I don’t think that Danny Baker did that.

But the prize really goes to food critic (seriously, could he be less qualified to opine on this issue?) William Sitwell. He told Newsnight viewers that Baker was never going to survive the tweet. Not because of his crappy behaviour, but because:

The vultures and crows of social media fetishise the gorging on the entrails, on the corpse, of people like him and his career

“The vultures and crows of social media fetishise the gorging on the entrails, on the corpse, of people like him and his career” – food critic William Sitwell on the response to the firing of broadcaster Danny Baker@WilliamSitwell | #newsnight pic.twitter.com/aNLJvteanS

We’ve heard it all before 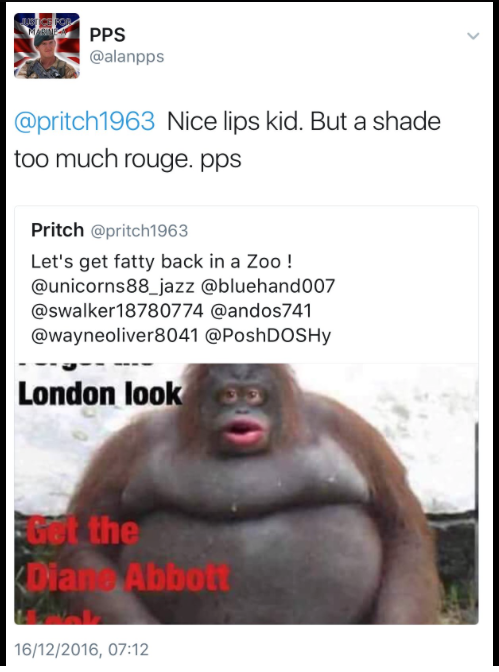 Pearmain refused to apologise, stating that:

Sometimes you have to stand up for your principles.

What principle is upheld by depicting a black MP as a fat ape? White privilege. The freedom to do whatever racist bullshit comes to mind without fear of consequence. As beat poet Carey Wood once put it to me:

These white guys confuse their privilege with our basic rights. When they have their privilege challenged, they react like it’s an attack on their rights. That’s how privileged they are. They don’t even understand the difference.

And did those ever-courageous centrist feminists of Twitter come to Abbot’s defense? No. Instead, many of them have courted popularity by indulging in the bullying of Abbott. As Victoria Princewell wrote in Gal Dem:

This is part of a broader cultural trend, exemplified by Jess Phillips who, according to Diane, falsely claimed she had told Diane Abbott to “fuck off”, and then went to an international newspaper to brag about doing so. Jess added that “people said to me they had always wanted to say that to her, and I don’t know why they don’t as the opportunity presents itself every other minute”. …

The only reason one could see no contradiction in bullying a woman with one hand and denouncing the bullying of women with the other is if some women are deemed less woman than others.

Given time and pressure, Baker made a fuller apology.

Good morning, everyone.
Following one of the worst days of my life I just want to formally apologise for the outrage I caused and explain how I got myself into this mess.
I chose the wrong photo to illustrate a joke. Disastrously so.

I would like once and for all to apologise to every single person who, quite naturally, took the awful connection at face value. I understand that and all of the clamour and opprobrium I have faced since. I am not feeling sorry for myself. I fucked up. Badly.

But while Baker (finally) accepted he’d earned the “opprobrium”, the reaction from (mostly) white supporters was a fairly violent: WE TOLD YOU SO! 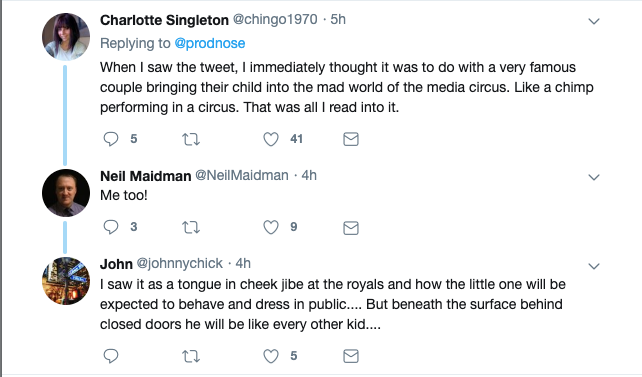 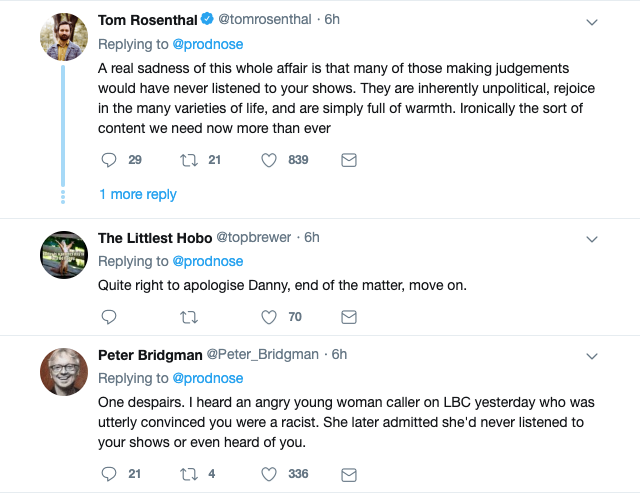 And that’s why the gaslighting phase of these incidents is more dangerous than the act itself. Those who are tone deaf to the impact on those living with racism daily will continue the martyr myth. What they should be doing is accepting their share of the responsibility and learning from it.

How to be an ally

The first element is to pay attention to the experiences of those targeted by this abuse. Empathy is the key, really imagine being them. The next is to go to battle unconditionally in these moments. One of the most powerful acts you can make is to call out the gaslighting/whitesplaining. The abuser will seek to make the reaction of the abused the problem. This is the ultimate game of the abuser. Not only to conduct the abuse, but to become the perceived victim. They have then gained both the power, and the moral high ground. By calling bullshit on them, you kill the abuse cycle. You also draw fire from the target of abuse.

Comedian Bethany Black showed what a decent ally looks like (regardless of their political persuasion): 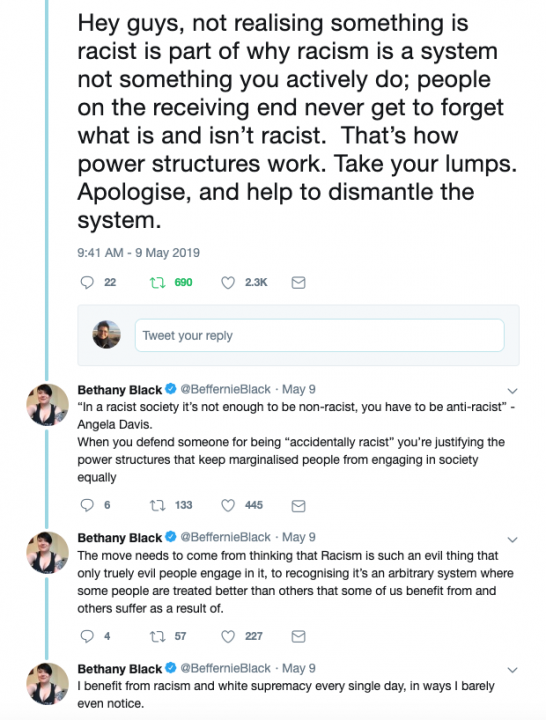 Was racist not stupid and good riddance. I’m sick of people thinking these ‘so called’ jokes are harmless banter. It’s painful, hurtful and disgusting. You bring the Country into disrepute never mind the BBC. https://t.co/OSZsig4mmD

What makes both of these people strong allies is that they also exhibit the final element. Reliability. They do this reliably, whenever racism happens in their eye line. It’s not a gesture or virtue-signalling, or based on the consensus agreement of others. They do this because it’s who they’ve become, by learning about their privilege and consistently checking it. That’s what being an ally looks like.