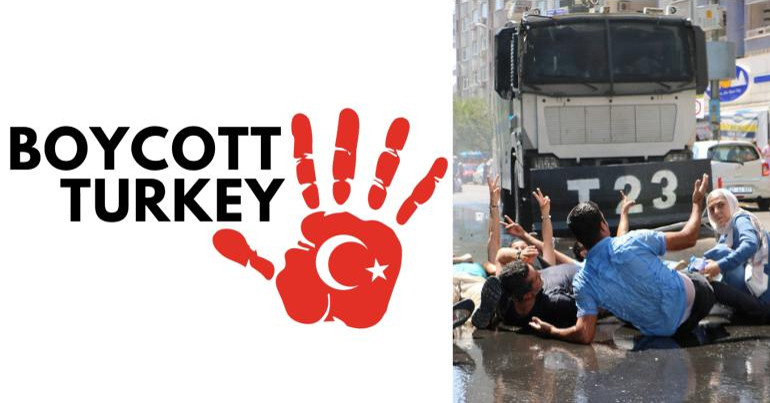 A new website is calling for a boycott of Turkey in solidarity with the Rojava revolution and the Kurdish Freedom movement.

Turkey has long been oppressing its Kurdish population, as well as other minorities who do not identify as Turkish. Kurdish people live within the borders of Turkey, Syria, Iraq and Iran.

A revolution is taking place in the Kurdish majority region of Rojava, northern Syria, based on the principles of direct democracy, women’s freedom, and ecology. Turkey invaded and occupied Rojava’s Afrin region last year. And it’s been threatening a new invasion of northern Syria. Turkish president Recep Tayyip Erdoğan says the revolution and its Peoples’ Protection Units pose a threat to Turkey’s security. In fact, the Turkish state sees the revolution on its borders as a direct threat to its autocratic rule.

The Turkish regime is becoming increasingly dictatorial. Last week, Erdoğan removed several elected mayors, replacing them with ‘trustees’ controlled by his party. The mayors were part of the progressive leftist Peoples’ Democratic Party (the HDP). The HDP is a pro-Kurdish, feminist party. It calls for the creation of direct democracy in Turkey based on ecological principles.

Both Turkey’s HDP and the ideas of the Rojava revolution are inspired by the politics of imprisoned Kurdistan Workers’ Party (PKK) leader Abdullah Öcalan. Öcalan has renounced his demand for a state for the Kurdish people. And instead he’s demanded autonomy based on direct democracy. These ideas are a direct threat to Erdoğan’s dictatorial rule, which is founded on an exclusive nationalism based on ‘Turkishness’.

An ethical stance against exploitation

According to Kurdish activist and academic Dilar Dirik:

Boycotting Turkey is not merely an attempt to economically disrupt a billion-dollar business empire that profits from massacre, authoritarianism and intimidation. It is also an ethical stance against the exploitation, terrorisation and annihilation of the Kurdish people and other communities, targeted by the nationalist state mentality of Turkey. Boycotting Turkey means saying no to the normalisation and white-washing of dictatorship and genocidal politics.

The website takes inspiration from the movement against South African apartheid and the Palestinian Boycott, Divestment, Sanctions movement, which it says have “a history of success”.

Campaigners are following in the footsteps of the Palestinian and South African campaigns and calling for a cultural boycott of Turkey:

We are calling for a similar cultural boycott of Turkey, and call on all musicians, artists, sports people, philosophers or any other cultural personalities or workers, to refuse to participate in any concerts, exhibitions, conferences, or any other related field in Turkey, in solidarity with Rojava and the Kurdish people…

We call on our friends to pressure promoters and record companies to cancel performances by such artists and sports people.

Britain sees Turkey as a priority market for the export of arms. This is in spite of Erdoğan’s dictatorial regime, internal repression, and aggressive militarism. Theresa May personally facilitated a £100m deal allowing British company BAE Systems to jointly develop the TFX fighter jet for the Turkish military. Following in May’s footsteps, Liam Fox travelled to Turkey earlier this year for talks aimed at increasing trade. Campaign Against Arms Trade calculates that Britain has exported at least £1.5bn worth of weapons to Turkey since 2008.

An important way to show solidarity

The boycott is important because the Turkish state finances its war and repression of the Kurds in Bakur [Turkey] and Syria with a lot of money. It’s very important that the Turkish State has less money for the repression of society and the Kurds, and for its wars. We have to attack it wherever we can, and to make the economy of Turkey as weak as possible.

Boycotting Turkey is an important way to stand with the revolution in Rojava and in solidarity with social movements inside Turkey’s borders. It allows people to take effective action wherever they are. Whether it be by persuading their university to sever partnerships with Turkish universities, or by not holidaying in Turkey.

Tom Anderson is part of the Shoal Collective, a cooperative producing writing for social justice and a world beyond capitalism. Shoal Collective is one of the groups that has helped create the Boycott Turkey website.