I was one of the Canary journalists arrested at the world's largest arms fair. Here's why. - Canary Workers’ Co-op 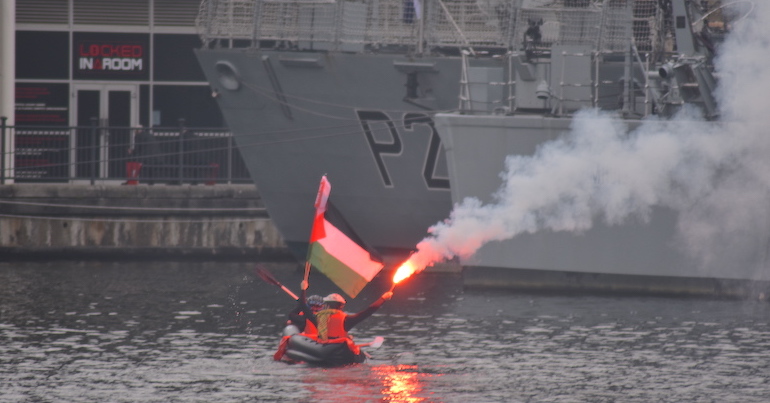 Last week I was arrested. Police put me in handcuffs three times. I was just one of many people taking direct action to try and stop the world’s largest arms fair – Defence Security and Equipment International (DSEI).

I paddled a kayak straight towards warships and sat in front of arms trucks. My body still aches and bruises from handcuffs deepen darker every day. But that really doesn’t matter. I’d do it all again without a second thought. Because those minuscule injuries pale into insignificance in the face of why we protested and took action against DSEI.

Between 10 to 13 September, London’s corporate-flash ExCeL centre hosted arms companies from around the world. It’s where deals are done. Weapons, military hardware and machinery shown off, bought and sold. Suited dealers brag their wares to dead-eyed delegates; billions of pounds and dollars flow between them.

Every penny, every cent – blood-stained, blood-drenched.

Because globally, statistics about death, injuries and war rise as corrupt governments use those same weapons to maim, injure and kill. Those weapons also displace millions more who’re forced to flee brutal conflicts. But these aren’t ‘just’ statistics.

So putting myself in front of police alongside other activists to bring attention to these global crimes is nothing. Allegedly, doing so amounts to criminal action. To my mind, that’s utter bullshit.

I looked at a police line face on as a woman from the Peace Pledge Union read out the names of children who’ve been murdered in Yemen. At the time, I was intentionally chained and entangled with two incredible women in front of a truck, blocking an ExCeL gate. “How many times,” I asked myself, “have three women – three mothers – needed to entwine just like this, to protect their children, their homes, their rights?” When our bodies are all we have, that’s what we’ll use.

Not a single cop listened to the names of those dead children. Some laughed and chatted with each other, others folded arms, looked bored or moody.

How many more deaths?

Shortly afterwards we were arrested.

Looking up at the sky as cops fought to handcuff us, I tried to recall the names of those dead children. But the cop’s smirking disinterest became enmeshed and tangled up with it all. I despise them for that.

And Yemen’s just one war, in one country, in a harrowingly conflict-strewn world.

In April, the UK government faced a judicial review over its continuing arms exports to Saudi Arabia. It investigated whether the UK was supporting ‘serious violations of international humanitarian law’ because Saudi Arabia used those arms in Yemen. As a result, UK arms sales to the Saudi regime are on hold after the Court of Appeal ruled they were “irrational and therefore unlawful”.

Every single delegate and dealer in that building knew this.

But conflict’s worth billions. And our police battle and batter us to defend those profits.

The parties to the conflict in Yemen – all the parties – are responsible for numerous violations of human rights, of international law and humanitarian law.

Some of these violations may constitute war crimes.

UN expert Charles Garraway named the UK, US and France as complicit. As Jenoubi also noted:

The missiles, the airstrikes, the snipers, (that) hit people going about their daily business, often without warning and in places where there’s no active conflict… there’s nowhere in Yemen that you can call safe, or where you can hide.

To anyone who ever asks why we do what we do, my bigger question is how can we not?

Later, a small group of us breached the might of DSEI security. Paddling as fast as I could towards giant warships in a little inflatable kayak, I thought momentarily: “Our tiny boat against that?”

We timed this to coincide with, and disrupt a militaristic boat display by BAE Systems, the world’s fourth-largest arms manufacturer. It’s also a DSEI “platinum sponsor“. How much money is that worth? How many deals done? How many will die as a result?

As far as we know, we stopped that display. In the bigger scheme of things, this didn’t stop the horror-machine of the arms trade. But it did show what a very small group of determined people can achieve.

So many bystanders that day heard us shouting: “Smash the arms trade!”, “Free, free Palestine!” and “Jin – Jiyan – Azadi” – Women, Life, Freedom – a Kurdish revolutionary chant. If even half those people ask why we were there, the message of what we’ll do to end DSEI travels further. Knowledge is power.

Take that action, double it, treble it. Imagine what we could achieve?

“How the light gets in”

So, to anyone who’s ever felt powerless watching the daily death, destruction and capitalist profit that’s slaughtering people and destroying our planet, we have to believe that change is possible. We are that change.

But change won’t come from walking around Westminster placidly waving a placard. It’s unlikely to come from taking part in scheduled, structured, Guardian-fawned, police-notified demos. Not all protest, as DSEI showed, is allowed. Times change. Activists respond. But state-sanctioned, cop-chatting, legal protest isn’t – and mustn’t be – all there is

Creativity is one of the most powerful acts of dissent. And that can’t be policed.

We need to find the margins, the small cracks, and pour our way in. Because that, as Leonard Cohen said, is “how the light gets in”.

Arrest doesn’t scare me. There’s a place of utter calm – serenity almost – because you know that your actions are absolutely right and justified. For me, it’s far harder to witness cop’s brutality towards other people than to be on the receiving end. It’s harder still to think about the pain, tragedy and torture of so many lives destroyed by the arms trade.

Each truck driving into DSEI brims with death and misery. How many more lives can just one truck destroy?

I was an activist long before I became a journalist. These days I’m both. Wearing a press badge means fully respecting a code of conduct and ethics – at certain times and in certain places that plays a vital role. But at other times it just needs to come off.

Freedom to make that choice is a huge privilege.

Too many other countries around the world imprison, torture, disappear and kill activists and journalists. Sitting in a police cell after arrest, I was close to tears. But those tears weren’t mine. They came from an overwhelming recognition that so many other people in the same situation face indefinite detention, torture and brutality. I knew that a solicitor would come, that I’d be out within 24 hours. So I’m not naïve enough to ever forget that – much as I despise our government – I’m overwhelmingly privileged.

So, I’ll use that privilege to raise awareness of, and disrupt the systems I oppose and loathe as much as I possibly can.

I’m no hero or heroine. Give that accolade to every child who’s innocence was stolen by Israeli snipers. Pass that on to everyone who’s lost family, friends or witnessed first-hand what these weapons actually do. To everyone murdered by the arms trade.

Then, get in that kayak. Paddle as hard as you can. Don’t ever stop.