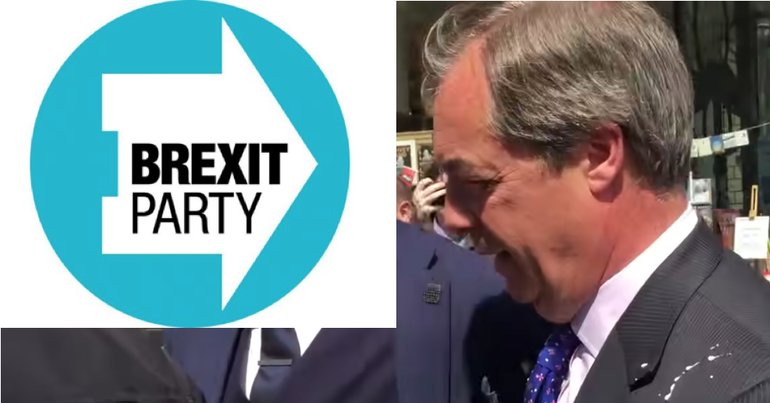 A Brexit Party official in a battleground seat has been recorded bragging about burying a pig’s head under a mosque. Undercover filming by Channel 4 News captured the racist rant just days after Nigel Farage told voters his party was no home for people with “extreme views”.

Racism in the extreme

Hartlepool is a key target for the Brexit Party, with party chair Richard Tice fighting to win the seat. Channel 4 News sent an undercover reporter to see what the team’s campaign looked like behind the scenes. And what they found was extreme racism.

Cos you’re getting more of the f***ing blacks and all, you know, the proper blacks from Somalia and all that. Cos you can tell the Somalians, they’re like skinny blacks aren’t they?

‘Cos you are getting more of the f*****g blacks and all, you know the proper blacks from #Somalia…’
These are the words of #BrexitParty officials caught on camera by ⁦@Channel4News⁩ – which reveals racism in Brexit Party. pic.twitter.com/D7TUvzSqdR

The Turks are the biggest f***ing heroin dealers in the country… F***ing all they’re doing is f***ing cleaning the money off the heroin and all that, aren’t they, the f***ing Turks.

But Mincher’s worst bile is reserved for British Muslims. Not only does he recite the Islamophobic conspiracy theory that Muslims are “outbreeding us”, but he proudly claims to have committed hate crimes, saying:

I didn’t even f***ing shout or anything. I just f***ing dropped three from behind. I just went f***ing windmill right in the three. Dropped them all.

And of course, there was that time he tried to bury a pig’s head under a mosque.

Pig’s head under a mosque

We tried to put a big pig’s head in the concrete. We got over the fence. You know, when people were doing the groundwork. They had all the bouncers who do all the North East, were doing the security for that mosque. So when we got in they caught us. Just f***ing kicked us out.

Because we were going to take a video with a pig’s head under their concrete. Let them finish it. Let it all get built. And then just send the video and say, ‘Look there, there you go, you’ve got a f***ing pig’s head under your mosque there so you’ll have to get it all knocked down and redone again’. Or they just leave it, cos it’s desecrated ground innit?

According to Channel 4 News, Mincher told this story repeatedly without being challenged. This included a conversation with Rick Moore, the Brexit Party’s candidate for MP in Blackburn.

You can watch the Channel 4 News report in full below.

Imagine being the kind of person that put this much time and energy into hating a stranger. In order to behave like this, you have to entirely strip your target of their humanity. Any half decent human being would find the thought of this abhorrent. They would imagine the deep pain and fear a person would feel in being targeted in such a way. But Mincher revels in the fantasy of that pain. He desires it deeply. And that’s how the slide into fascism happens, and has happened throughout history.

Mr Mincher was less cocksure when confronted over the footage and forced to resign. He dismissed his anecdote “as a stupid act of showing off to your reporter”. He also claimed to “realise how much I need to change my attitude to others.” Brexit Party chair Richard Tice stated that “both I and the Brexit Party totally condemn the hideous remarks”, but couldn’t help adding that:

Channel 4 appears to have abandoned all pretence of impartiality, in clear breach of its obligations in General Election reporting.

But come on. If your party officials can’t be filmed without ranting about “P*kis”, your party has a racism problem. And this party is attempting to win seats in parliament.

The result is that people of colour are being forced to consider drastic measures in case the racist parties win this election. A Twitter thread by comedian Ava Vidal revealed the deep terror engulfing minority communities. Non-white Brits shared their plans to leave Britain if Boris Johnson is elected on December 12.

Black people, Muslim people (and I know some sit on the intersection of both communities) LGBT people also:
Are you frightened about what a Johnson led Tory government will mean for you? Considering leaving the UK? If you’re available Mon afternoon to talk about it DM me! RT!! 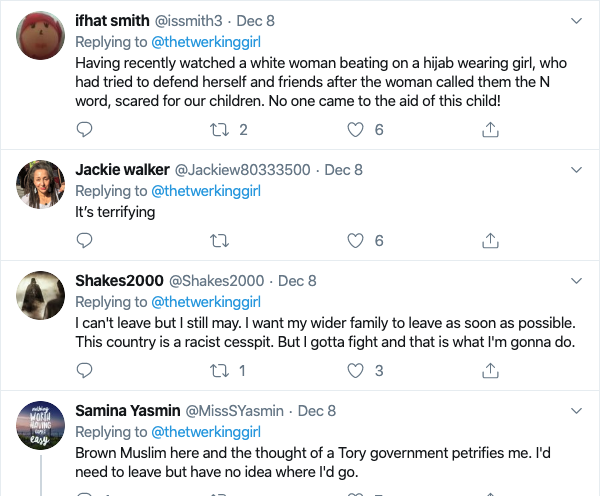 And why would any non-white person in Britain feel safe from a PM who is an unrepentant racist? Worse, his party could end up in a coalition with Brexit Party officials and lurch yet further to the far right.

These conversations remind us how important every vote will be this election. The fight between a racist Tory Party and an anti-racist Labour Party will shape the character of our country and affect the lives of citizens deeply. People of colour and other minority groups are hoping voters reject racism decisively this election. Because whatever people say, their actions this election speak louder. At this point, everyone knows that a vote for the Tories or the Brexit Party is a vote that will empower racists. And anyone ticking those boxes bears responsibility for the outcome. As a woman of colour also facing an uncertain future if those forces win, I am asking you: please don’t.