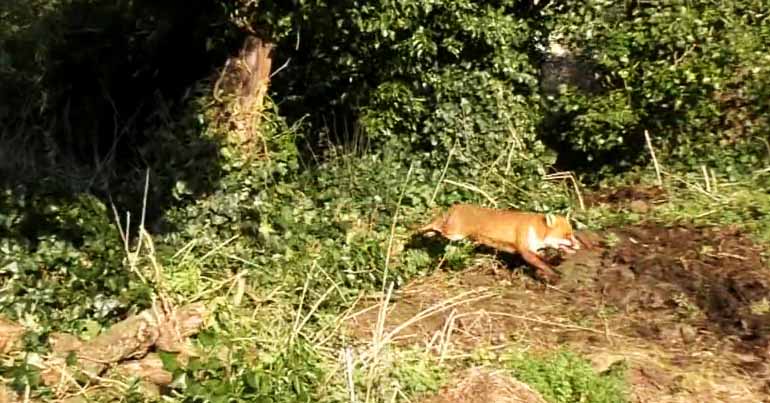 A Somerset magistrate found the huntsman of Blackmore and Sparkford Vale Hunt (BSV) not guilty of illegal hunting. And the verdict reveals how much of a farce the hunting ban really is.

Anti-hunting groups Hounds Off and Somerset Wildlife Crime filmed the BSV hounds chasing a fox through a churchyard. The incident, which took place in Charleton Horethorne, Somerset, happened on 23 February 2019. It went to court on 22 January 2020, where a magistrate found the huntsman Peter Mark Doggrell not guilty of offences under the Hunting Act.

Video by the two anti-hunting groups, which was also shown in court, shows the pack of hounds going into cry as they chase a fox through the churchyard. The huntsman and other hunt staff make no attempt to call hounds off the fox. In fact, as The Canary previously reported, the footage:

shows a huntsman using his horn as hounds stream through a field next to the churchyard. The two horn calls resemble “doubling the horn” and “blowing away”, which encourage hounds to hunt.

Despite this, the magistrate found Doggrell not guilty. And it comes down to the flawed wording of the Hunting Act.

SomersetLive reported that Doggrell said the hounds that day were following a trail. He also said that trained hounds would “make the same noise as hunting a trail as they would a live animal”. Furthermore, Doggrell claimed that he was not aware of a fox in the churchyard. He also claimed that the horn calls ‘encouraged’ the hounds to “re-group”.

The Hunting Act doesn’t require hounds to kill a wild mammal in order to for an offence to be committed. It only requires that a person “engages or participates in the pursuit of a wild animal” and that “one or more dogs are employed in that pursuit”. However, a 2009 court case clarified this further. The case, which involved three members of the Devon and Somerset Staghounds, established that hunt staff must be pursuing an “‘identified’ wild mammal“.

In other words, the prosecution must prove the hunt actively encouraged its hounds to chase a fox, hare, deer, or other wild mammal. This could be done either by showing hunt staff encouraging hounds onto the animals, such as through horn calls. Or it could be done by showing the hunt was aware that hounds were chasing a wild mammal but made no attempt to stop them.

This was proven in the case against the Thurlow Hunt in March 2019. Beds & Bucks Hunt Sabs said the huntsman on the day could clearly be heard encouraging the hounds to hunt using his voice, and the district judge agreed.

However, Doggrell’s defence shows that ‘trail hunting’ is designed to win court cases, not to provide an alternative to bloodsport.

While there’s no fixed definition of trail hunting, a guide by the Countryside Alliance provides insight into how it’s been designed. The pro-hunt lobby group says trail hunting intends to “simulate traditional hunting”. Hunts achieve this using a “quarry-based scent”, or a scent made with a fox. A witness for BSV said the hunt made its trail from fox urine, although at least one other hunt has claimed it boils dead foxes.

The Countryside Alliance also says that the huntsman and whippers-in “do not know exactly where the trails have been laid”. It follows this up by stating that “there isn’t a set route or a finishing time” for trails. In other words, hunt staff are protected by the excuse of ignorance in case hounds chase a fox or other mammal. Trail layers also can’t be charged because they are not in control of the hounds.

Doggrell’s defence rested on ignorance of what his hounds were doing. And it’s a defence encouraged by the wording of the Hunting Act. Reacting to the verdict, Somerset Wildlife Crime said:

A very disappointing result in what should have been an open shut case of illegal hunting. …

The law isn’t working, this case signifies exactly why we need a recklessness clause added, then British wildlife would be afforded the protection they were meant to benefit from when the Hunting Act was passed 15 years ago.

The hunting ban is not fit for purpose. One viewing of Hounds Off and Somerset Wildlife Crime’s footage will prove that. Until the kennels are shut down permanently, hunt saboteurs and monitors remain the only people holding these hunts to account.