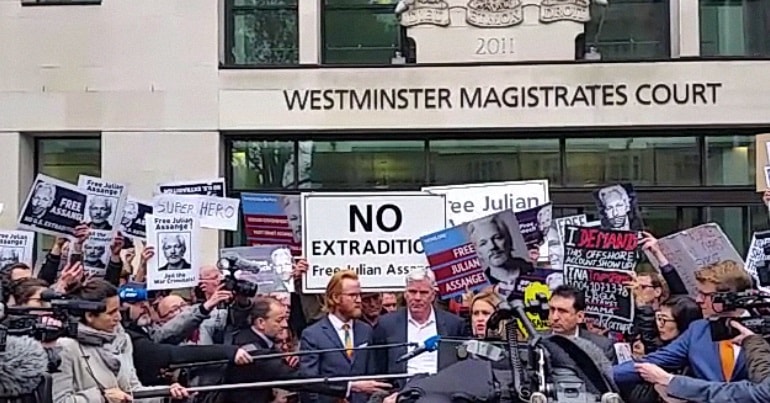 The first article in this series proposed that there are at least six legal reasons why the extradition request by the US against WikiLeaks founder Julian Assange should be dismissed by the UK courts.

But there is another dimension – that of alleged prejudice by UK justices and other legal irregularities. This builds another strong case to challenge extradition.

The Guide to Judicial Conduct in England and Wales states:

The judiciary must be seen to be independent of the legislative and executive arms of government both as individuals and as a whole.

However, in November 2019 Daily Maverick journalists Mark Curtis and Matt Kennard revealed that:

at the same time Lady [Emma] Arbuthnot was presiding over Assange’s legal case, the judge’s husband [Lord James Arbuthnot], was holding talks with senior officials in Turkey, exposed by WikiLeaks, some of whom have an interest in punishing Assange and the WikiLeaks organisation.

Curtis and Kennard additionally revealed that:

[Lord] Arbuthnot was also until February 2019 an “adviser” to the military corporation, Babcock International, on whose board sits the former head of GCHQ, Sir David Omand. …

Before becoming a peer, Lord Arbuthnot was a member of the parliamentary Intelligence and Security Committee from 2001-06. He is also currently an officer of the all party parliamentary group on cybersecurity which is administered by the Information Security Group (ISG) at Royal Holloway, University of London. …

He is also a former member of the national security strategy joint committee and the armed forces bill committee.

In a follow-up article, Curtis and Kennard revealed that Vitruvian Partners, the employer of Arbuthnot’s son Alexander, has a multimillion-pound investment in cybersecurity firm Darktrace, whose officials originate from the National Security Agency (NSA) and the CIA.

Neither Lady nor Lord Arbuthnot returned requests for comment to Daily Maverick.

Previously, The Canary reported how WikiLeaks files had revealed Arbuthnot family business and intelligence connections. The Canary also revealed how Lord Arbuthnot is a member of the advisory board of the Royal United Services Institute for Defence and Security Studies (RUSI); is chair of the advisory board of the UK division of defence and security systems manufacturer Thales; and that when a Tory MP he was chair of the Defence Select Committee.

The Canary further reported that Lord Arbuthnot is listed as senior consultant to SC Strategy and, until 2017 was director. His co-directors were Lord Alex Carlile and former MI6 head Sir John Scarlett, both of whom remain active in the company. In October 2013, Carlile argued that the publication of whistleblower Edward Snowden’s revelations about mass surveillance “amounted to a criminal act”. Carlile also oversaw UK anti-terrorism laws and supported the introduction of the ‘Snoopers’ Charter’.

Neither Lady nor Lord Arbuthnot returned requests for comment to The Canary.

There are other concerns.

At a hearing in December 2019, Gareth Peirce, Assange’s UK lawyer, told the court that access to her client at Belmarsh prison had been restricted. Consequently, Assange had not been provided with access to evidence in preparation for the main extradition hearing.

Regarding that evidence, Peirce explained to the court:

Without Mr Assange’s knowledge, some of it is recently acquired evidence, some of it is subject to months of investigation not always in this country, of which he is unaware because of the blockage in visits.

Indeed, such evidence would include the surveillance footage of Assange in the Ecuadorian embassy. For in the latest twist, witnesses during the trial of UC Global head David Morales stated how that footage and other material was regularly provided to the CIA by him via a security operator working for billionaire gambling magnate Sheldon Adelson, who just happens to be one of Donald Trump’s “biggest benefactors”.

At another hearing, on 15 January, presiding magistrate District Judge Vanessa Baraitsar made it clear to Peirce that she and her legal team will only have access to Assange for one hour, during which evidence can be examined. Consequently, Peirce has raised the possibility of a judicial review.

The outcome of Assange’s trial is also significant for journalists around the world. Pulitzer Prize-winning journalist Chris Hedges argues that if the extradition proceeds:

it will create a legal precedent that will terminate the ability of the press, which Trump repeatedly has called “the enemy of the people,” to hold power accountable. The crimes of war and finance, the persecution of dissidents, minorities and immigrants, the pillaging by corporations of the nation and the ecosystem and the ruthless impoverishment of working men and women to swell the bank accounts of the rich and consolidate the global oligarchs’ total grip on power will not only expand, but will no longer be part of public debate. First Assange. Then us.

And Shadowproof journalist Kevin Gozstola points out that the charges raised against Assange have wider implications:

Assange holds citizenship in Australia and was also granted citizenship by Ecuador a little over one year ago. Invoking secrecy regulations in the US as part of an indictment against someone who is not an American citizen carries implications for world press freedom.

Altogether, the six legal arguments, as well as claims of impartiality by UK justices and restriction of access to Assange by his lawyers, could see the extradition request denied.

At a hearing on 23 January, it was agreed that the main extradition hearing will start on 24 February at Woolwich Crown Court and will last about one week, with further proceedings expected on 18 May to last another three weeks. A number of parliamentarians from across Europe have indicated they hope to attend the court hearings.