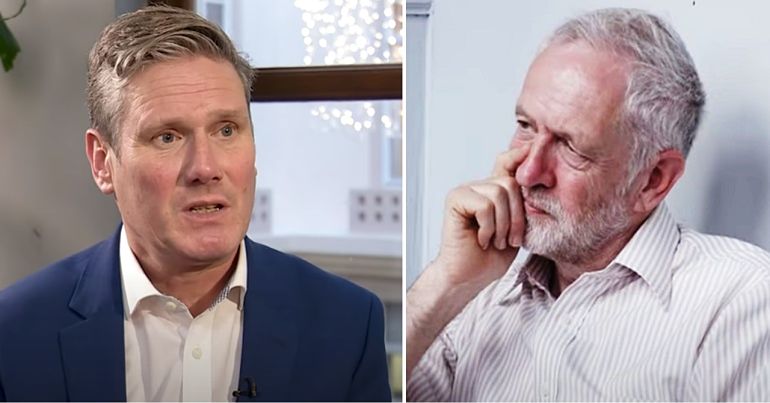 Jeremy Corbyn’s suspension from the Labour Party was rightly greeted with shock and an outpouring of solidarity. But Corbyn’s suspension also served as a massive distraction from critically evaluating the Equality and Human Rights Commission (EHRC) report.

On 29 October, the Equality and Human Rights Commission (EHRC) published its long-awaited report into antisemitism in the Labour Party. The BBC reported that:

And Keir Starmer said that it was “a day of shame”.

However, the real “day of shame” was Starmer’s response to the report, and his sacking of Corbyn. As Maryam Jameela wrote for The Canary:

In getting rid of Corbyn, a lifelong anti-racist, the Labour Party has once again shown that it is not the party of anti-racists.

The EHRC set out to use its:

legal powers to investigate allegations of antisemitism in the Labour Party.

And it found that:

there were unlawful acts of harassment and discrimination for which the Labour Party is responsible.

Any and all allegations of antisemitism must be taken seriously. And if the Labour Party is responsible for “harassment and discrimination” then this must be addressed. But here’s where there’s a fatal flaw. Because the report includes, quite rightly, “using antisemitic tropes” as an issue. But it then adds “suggesting that complaints of antisemitism were fake or smears” as an issue in its own right.

This is hugely problematic and a massive Catch-22. Here is one of the comments the EHRC uses as an example of antisemitic harassment: a Facebook post from Pam Bromley MP about Jeremy Corbyn:

‘My major criticism of him – his failure to repel the fake accusations of antisemitism in the LP [Labour Party] – may not be repeated as the accusations may probably now magically disappear, now capitalism has got what it wanted’.

There are several points which arise from this that are central to analysing the EHRC’s findings.

Firstly, an investigation into antisemitism, should, you know, uncover actual instances of antisemitism. From the use of antisemitic tropes to blaming all Jewish people for the human rights abuses of the Israeli state, there are many areas where antisemitism is rife in our society. As a Jewish person, I’ve written before about how terrified I am of the rise in genuine antisemitism, not just in the UK, but across Europe and the rest of the world.

So for the EHRC to reach its conclusion of “harassment and discrimination”, it would seem reasonable that this should involve a litany of the above types of examples of antisemitic behaviour. But it doesn’t. It instead relies on comments, such as the one above, that call into question the accusations of antisemitism and the motivation behind these accusations.

Now, if the EHRC could provide a list of proven examples of antisemitism, this might look like more of a legitimate allegation. But it doesn’t. Instead, it creates an endless feedback loop where those accused of antisemitism, or their supporters, can’t defend themselves for fear of being labelled antisemitic. The EHRC’s conclusion is chilling given how little evidence is presented of antisemitism, aside from comments which call out the smears.

Not believing the victims of hate crime is a serious matter. Secondary victimisation, where a victim has to fight institutions to be believed, is often reported to be as damaging, if not more so, than the actual racist incident. All and any accusations of racism need to be taken seriously.

But for that to be the case, the EHRC would have needed to produce evidence of antisemitism that doesn’t rely on a definition based on how people responded to accusations of antisemitism. It doesn’t. In 70 cases, it found two for which the Labour Party was responsible. And one of those is the above example of calling out the accusations as a smear campaign. The EHRC identified 18 borderline cases, but didn’t have enough evidence to say whether the Labour Party was legally responsible. And it added that:

In many more files there was evidence of antisemitic conduct by an ‘ordinary’ member of the Labour Party, who did not hold any office or role, whose conduct the Party could not be directly responsible for under equality law.

But the vagueness of this number, and the fact that this isn’t broken down into types of accusations, makes it meaningless. The list of examples provided by the EHRC contains antisemitic behaviour that I’d want to see challenged and dealt with. However, this list also includes:

described [of] a ‘witch hunt’ in the Labour Party, or said that complaints had been manufactured by the ‘Israel lobby’

This is an accusation that has been made by many Jewish members of the Labour Party.

Let’s play a little game. Let’s take out names and the rights and wrongs, ethics and morals of the situation with Israel and Palestine. This is important as it’s an exercise in logic rather than beliefs or values.

But State A is facing an election. One of the potential candidates for leader of State A doesn’t like State B. In fact, it supports State B’s ‘enemies’ and thinks State B has committed war crimes against them. State B then, predictably, feels threatened by the possibility of this new leadership. For better or worse, State B will therefore try and do everything it can to prevent that new leader coming into power.

And it’s therefore obvious that Israel would have been concerned about Jeremy Corbyn potentially becoming the prime minister of the UK – especially after the 2017 election result. And the Israel lobby does indeed attempt to influence both UK politics and journalism though accusations of antisemitism. In 2009, Open Democracy reported:

Some journalists we spoke to had been accused of antisemitism, and felt inevitably it had done some damage to their careers. Others, like the BBC’s Orla Guerin, against whom this very serious and damaging charge has repeatedly been made by the Israeli government, wouldn’t even talk to us off the record. It is easy enough to see why. Guerin is a brave, honest and compassionate reporter. Yet the Israeli government has repeatedly complained to the BBC that Guerin is “antisemitic” and showed “total identification with the goals and methods of Palestinian terror groups.”

It’s vital that we’re free to critique and examine the actions of any government without accusations of racism. And it’s essential that we’re allowed to critically examine the role the Israel lobby may or may not have played in manufacturing or, at the very least, exacerbating the antisemitism crisis in Labour, and using it for its own ends.

But taking a closer look at the EHRC also shows a different angle on the inquiry and potentially makes more sense of its flawed remit.

Founded in 2006 as part of the Equality Act, on paper the EHRC looks like it should be a good thing. But it’s been mired in controversy.

Former MP Chris Williamson released a video explaining some of the issues with the organisation. These include links to Tony Blair and Peter Mandelson, as well as accusations of racism about the body itself. In 2017, the EHRC was said to lack “credibility, authority and legitimacy” after it was accused of targeting BAME staff for redundancy.

The EHRC was established almost 13 years ago to enforce equality and non-discrimination laws in Great Britain.

In this video, I explore whether the so-called 'equalities watchdog' has truly lived up to that purpose. pic.twitter.com/946w6rBInz

As Williamson points out, the report into allegations of antisemitism began due to lobbying by the Jewish Labour Movement (JLM) and the Campaign Against Antisemitism (CAA). According to Williamson, the CAA has received funding from the Anglo-Jewish Association (AJA). The AJA is a charity with the “primary purpose” of

promot[ing] wider and better understanding of Israel in the UK; to encourage exchanges between both countries at every level and generally to support activities which foster good will between British and Israeli citizens.

Williamsons’ video also shows that the AJA trustees’ deputy president is Michael Hilsenrath. Rebecca Hilsenrath, his wife, was chief executive of the EHRC when it decided to investigate Labour, and when CAA made the first complaints to EHRC. Although Rebecca Hilsenrath eventually recused herself, this took six months.

At the same time that the EHRC was listening to these groups, it was ignoring calls from the Muslim Council of Britain. In May, it dropped an investigation into Islamophobia in the Conservative Party.

Critical analysis is more important than ever

Looking at these flaws in the EHRC, and this latest report, is essential. But with Corbyn’s suspension, any whiff of this critical evaluation has been drowned out. The report’s headline findings are accepted uncritically and broadcast as fact, without nuance and closer examination. It’s marred by interference from the very lobby that the report says is antisemitic to accuse of involvement. This argument wouldn’t stand if the report had evidenced other examples of antisemitic behaviour. But it doesn’t.

Meanwhile, Starmer continues to ignore calls to investigate the abhorrent racism faced by Diane Abbott and other People of Colour in the party. And the EHRC still hasn’t launched an investigation into the rampant Islamophobia in the Conservative Party.

I remain scared of the rise of antisemitism in the world. But I am terrified and chilled at the way antisemitism, and my heritage, has been weaponised to smear anti-racists. All while real racists walk around the halls of Westminster unchallenged.