If Irish unification is inevitable, do we know what that would look like? 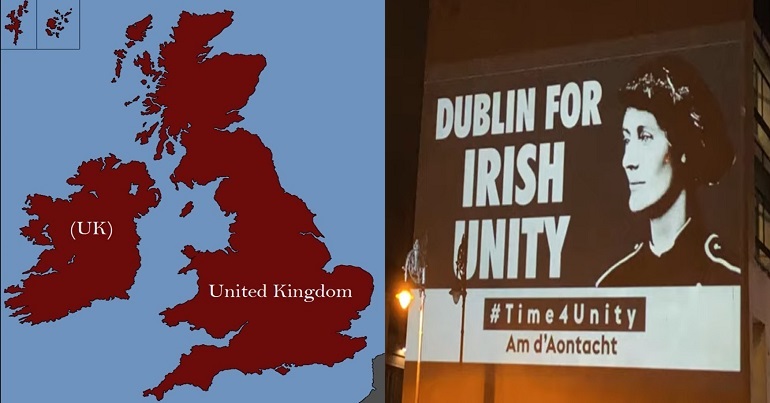 17 March is St. Patrick’s Day and Ireland’s national holiday. Most Irish people call it ‘Paddy’s Day’. From my own Irish perspective, I don’t always look forward to it if I’m honest. In fact, there’s quite a lot I hate about it. This includes flag-waving nationalism; propaganda telling us ‘Ireland is open to the world’ when so many refugees in Ireland are treated so inhumanely, and the unquestioned commercialisation of the holiday. I’d need another article to explore all that so I’ll park these important topics for now.

It’s also a time when anti-Irish racist stereotypes, such as cringing Hollywood depictions of Irish people as drunk or angry leprechauns can come to the fore. Irish politicians and business leaders travel the world to further their political and business agenda – though they tell us it’s in the national interest. And you can expect them to make much of the Irish heritage of current US president Joe Biden, even if his true allegiances lie with Wall Street.

But there are many upsides. It opens up, especially since Brexit, a discussion on unifying the north and south of Ireland. So, I feel compelled to make my position clear on this. Well, clearish. I guess what I’m really doing here is thinking out loud. And I’m also asking Irish people to think out loud. If you really do see Paddy’s Day as a national holiday, why not start a conversation about the kind of Ireland you want? Is an island united as one political entity enough for you? Or do you want something that’s truly inclusive?

Because at a political and mainstream media level, this conversation is already underway. And if we leave it to these guys to answer that question, we might find ourselves living in a united Ireland alright, but it may not be the one we imagined. It might just be one that replicates the injustices of the past and present.

Do I want Irish unity, yes or no?

During my childhood years and teens it was a straightforward ‘yes’. These days, in short, it’s a ‘yes but’. I used to support a united Ireland without thinking too much of what that would look like. ‘Brits Out!’, I thought. What else mattered? And given the misery inflicted upon Ireland by the ‘Brits’, that was a reasonable position. But these days, thankfully, I think a bit more broadly than that.

As Ireland was partitioned in 1922, it had, obviously, been united at one stage. But that was unity under British rule. That glaringly obvious fact was actually an eye-opener for me. Because it highlighted to me that simply uniting the island as one was not my goal. I certainly don’t want a united Ireland under British rule. And I would feel the same if unity could only be achieved by an independent united Ireland joining the British Commonwealth.

Likewise, or maybe even more so, a united Ireland free of British rule but characterised by the inequality and deprivation we currently experience is also unacceptable. What is the point of uniting all 32 Irish counties (26 in the south and 6 in the north of Ireland) if we don’t end the inequality of the neoliberal Irish state? A united Ireland can only have meaning when it’s also free and fair. A place to live, as stated in the 1916 Proclamation of Independence, that:

guarantees religious and civil liberty, equal rights and equal opportunities to all its citizens, and declares its resolve to pursue the happiness and prosperity of the whole nation and of all its parts, cherishing all the children of the nation equally and oblivious of the differences carefully fostered by an alien government, which have divided a minority from the majority in the past.

A campaign for Irish unity that isn’t seriously working towards this aim isn’t worth a penny candle. It would in fact be unity for unity’s sake. And who would that serve? Of course unity for unity’s sake does come with the bonus of allowing us poke fun at the British establishment as its precious kingdom falls apart, but if we’re serious about building a fair society, we need to do a lot better than that.

In the conversation currently underway, some argue a united Ireland in the commonwealth would represent a “gesture of goodwill” to unionists. The commonwealth is important to the unionist tradition in the north of Ireland. But commonwealth membership would apply to the whole island, and the majority of the island want nothing to do with it. That bit I’m crystal clear about. But that’s not me dismissing unionist culture. That’s me abhorring the undemocratic, wasteful nature of monarchy – not to mention the crimes of its empire.

Just over two years ago, I also wrote about Irish unity. Back then I referred to an Irish unity talk I’d been to. It was, predominantly, people from the Irish republican or nationalist tradition who organised it. One of the speakers at that talk suggested a united Ireland might, again, as a ‘gesture of goodwill to unionists’, have a royal family. But coupled with the fact that most Irish people want nothing to do with monarchy, that argument relegates republicanism to little more than a bargaining chip. As if to say ‘yeah, we’ll push this republicanism thing as far as we can, but if it gets in the way of the ultimate goal – a united Ireland – we’ll dump it’. This is a classic example of unity for unity’s sake.

Membership of a monarchical commonwealth is a backward step. The south of Ireland left that behind more than 70 years ago. And that’s just about as close as I’d like to be to that imperialist institution.

That’s not to say the south of Ireland, in its current state, is a model for independence. It’s not. As I touched on earlier, it’s a neoliberal state with growing inequality. Since the pandemic, certain media outlets have reported on how well the Irish economy weathered the economic storm brought on by the coronavirus (Covid-19) pandemic. But it’s all nonsense. Most of that reported economic wealth comes from tax dodging multinationals routing large amounts of their business through Ireland.

Moreover, our public services are a shambles. The poor state of our health system was underlined during the pandemic. Public transport development projects are shelved while road-building projects get the green light. And while Gross Domestic Product (usually just called ‘GDP’ – an indication of a country’s wealth) in Ireland is high, so too is personal debt. In fact, we have one of the highest debt levels per person in the world. Moreover, Ireland’s financial heartland – where a number of these multinationals reside – exists side by side with abject poverty.

No to religious domination

And how have we done when it comes to “cherishing all the children of the nation equally”? I’d say, both north and south of the border, we haven’t even paid lip service to it. Since independence in 1922, the south of Ireland has had a long and shameful history of abusing women and children. This abuse, in part, became known as the Magdalene Laundries scandal. These Catholic-Church run laundries were effectively prisons for women, from 1922 until 1996, who had children outside of marriage or for girls they labelled as “troubled”. They suffered untold abuse at the hands of the Church while the Irish state looked on. So much so, the UN Committee Against Torture had to tell the Irish government to establish an inquiry into the treatment of these women and girls.

The Irish state has still not properly tackled this abuse on women and children. Abuse which also includes experimentation by a pharmaceutical giant.

So what do I say Yes to?

Every time people discuss the topic of Irish unification, I hear my father’s words ringing in my ears. As far back as the early 1980s, he said Britain would never agree to a united Ireland because it feared Ireland “would become another Cuba” – a threat to its closest neighbours. That may sound somewhat conspiratorial, but it may not be completely off the mark either. And he added – in some ways more worryingly – that instead of uniting Ireland, “we could lose all 26 counties”. He believed this could happen as Irish politicians, so eager to say ‘we were the ones who unified Ireland’, would agree to all sorts of concessions to unionism. Which is why I find all this talk of joining a commonwealth and ‘goodwill gestures’ so troubling.

Should the 32 counties of Ireland ever become one, in any form, then I will of course celebrate that moment. But a united island without fairness and equality, or with a monarchy, is quite meaningless. So my celebration would be brief. So on this day of Irish days, I want Irish people to think long and hard about the kind of united Ireland they want to live in. And that starts by looking at the kind of Ireland we already have.