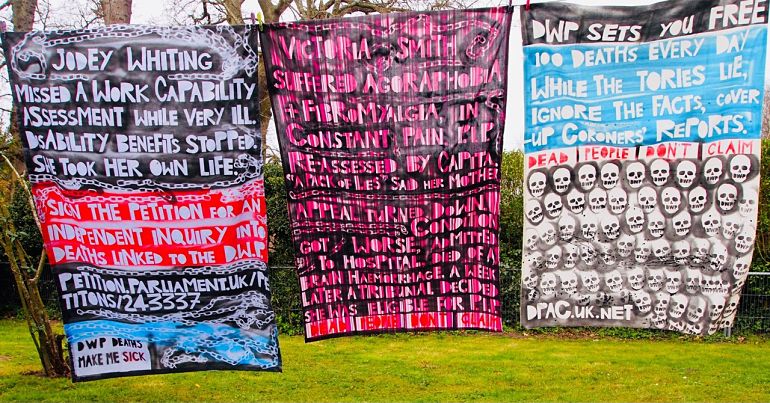 Vince Laws is an artist, a poet and a disability rights activist. His artwork DWP Deaths Make Me Sick is a memorial to people who’ve died under the government’s austerity regime. And it’s a withering attack on the Department for Work and Pensions (DWP) and its controversial assessment processes. The artwork will be on display at the prestigious Cambridge Junction on 26 and 27 April.

His play A Very Queer Nazi Faust hit the stage in September 2018, after an initial performance at the previous year’s Norwich Pride. It was a baroque tale of one man’s struggle through a nightmarish version of the benefits system which may or may not have been an exaggeration of the real thing.

Initially to act as a backdrop for the play, Laws created a series of ‘shrouds’. Most of them tell the story of someone who’s died following a negative or unhelpful decision by the DWP or its outsourced assessment process. As well as appearing in A Very Queer Nazi Faust, the shrouds have been used as banners at demonstrations. They even adorned a parliamentary lobbying event attended by John McDonnell and shadow minister for disabled people Marsha de Cordova, among others.

But Laws was aware that, if the shrouds only appeared in a ‘campaigning’ context, they might have a limited audience. So he’s also displayed them as artworks. As he wrote in openDemocracy:

I felt that the shrouds deserved to be seen in their own right, so I’m concentrating on that this year. They’ve been on street protests, in Parliament, and hung on gallery walls. They definitely attract attention. They’re bold and vibrant, and when people read them they are shocked or sad or angry, or pleased to see their story represented.

Unquestionably “bold”, the shrouds are also deeply moving. Stencilled lettering combines with repeated motifs and sometimes oppressive blocks of colour to give the shrouds a visual power on top of their heartbreaking content. So far, there are 25 shrouds. To see more than a few at a time is a pretty crushing and sobering experience.

In 2019, the shrouds will be touring around the UK. They’re appearing at Cambridge Junction as part of the I’m Here, Where Are You? arts festival.