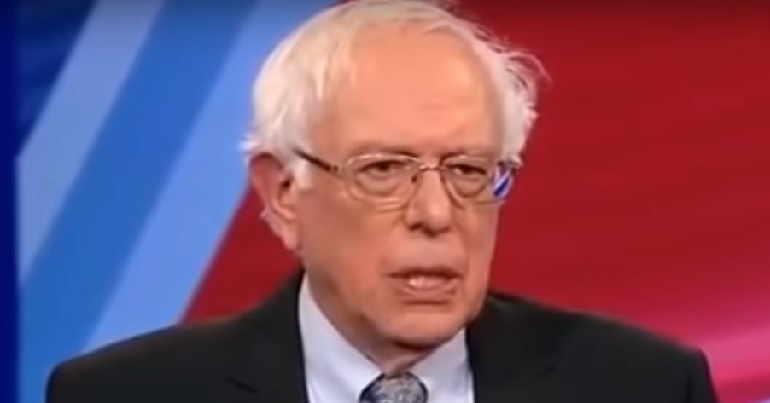 If Sanders becomes president, he would be the first Jewish person to hold the office.

Israel and the US

Sanders was asked how he would ensure the US alliance with Israel if he becomes president given his criticisms of Netanyahu. He began by pointing out that he himself had once worked on a kibbutz — a form of agricultural or industrial cooperative — in Israel as a young man. He also noted that he has family there.

But he then argued that:

the fact of the matter is that Netanyahu is a right-wing politician who I think is treating the Palestinian people extremely unfairly.

He also remarked that the US gives Israel billions of dollars in military aid. But rather than showing such bias in the Middle East, he insisted:

the United States should deal with the Middle East on a level playing field basis.

But Sanders went further. He asserted that the US shouldn’t “just support one country”; especially when this country, Israel, is:

now run by a right-wing — dare I say it — racist government.

Having @AIPAC sub-tweet & chide @BernieSanders for the supreme crime of speaking ill of Israel's leader is one his best endorsements yet. Sanders is running for President of the US and is thus allowed to criticize the leader of this foreign country & question these "close ties." https://t.co/VXmTkKVH79

Fellow journalist Mehdi Hasan, meanwhile, imagined what a meeting between a President Sanders and Netanyahu would look like:

On CNN, @SenSanders calls the Netanyahu government in Israel a "right wing, dare I say it, racist" government. Imagine what the first official meeting at the White House between a President Sanders and Prime Minister Netanyahu in 2021 would be like 😜#CNNTownHall

The truth of the matter

prohibits or does not allow Palestinians who are citizens of Israel to bring their foreign spouses… who are from Arab countries, or even from the West Bank and Gaza Strip- to reside with them in Israel or in Jerusalem.

The government has also targeted refugees who have arrived in Israel from Eritrea and Sudan. Netanyahu has recently described them as “infiltrators”.

Considering the hard right’s election victory in Israel earlier this month, we can expect Israel’s disregard for international law to continue. For the Palestinian people, this means continued suffering.

But if Sanders becomes US president, perhaps he can challenge this status quo and hold Israel’s government to account.