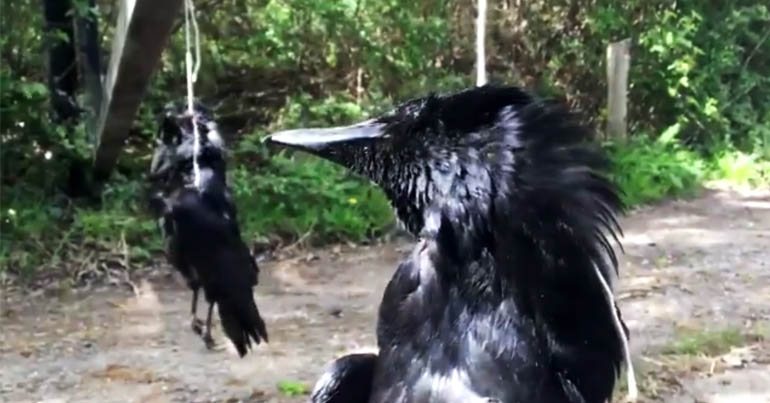 CORRECTION: This piece was updated on 26 April at 18:40. It originally stated Megan McCubbin was Packham’s partner and has now been corrected to say that she is his step-daughter.

Someone left a gruesome message for conservationist Chris Packham to wake up to on 25 April. And it came after he helped win a major legal battle against the shooting industry.

Dead and strung up

Natural England (NE) introduced new rules around shooting many of England’s wild birds on 25 April. It suspended general licences, which permitted the free shooting of 16 bird species including woodpigeons and crows. NE made the change as a result of a legal challenge by wildlife campaign group Wild Justice. And the move angered many in the pro-shooting community.

Wild Justice comprises three notable wildlife conservationists: Mark Avery, Ruth Tingay, and Packham. So when Packham woke up on 25 April to find two dead crows on his gate, strung up by their necks, it was more than coincidence:

Zoologist Megan McCubbin, Packham’s step-daughter, posted a video of the scene on Twitter. But she said the attempt to intimidate “won’t phase us”:

Our gate this morning.

Your intimidation won’t phase us. It’ll drive us to be stronger, better and more ruthless in our campaigning for wildlife.

Shooting fraternity, please sort out your own bad apples. I’m sure (I hope) this is not representative of you all. @ChrisGPackham pic.twitter.com/4IotEH8ZLU

Whatever message the anonymous culprit(s) were trying to send, however, became lost in the tide of support Packham and McCubbin received. At the time of writing, the pair’s photo and video of the scene have been retweeted more than 13,000 times. More than 7,000 people also commented on Packham’s photo.

Many high-profile wildlife advocates on Twitter showed their support:

Cowardly, grim, disgusting intimidation & harassment. So sorry you've suffered this, Chris. I look forward to charges being brought against the instigators.

So sorry for you and your family Chris. So many have tried to have a debate with these people: I understand why, but they're so deeply committed to the gun there really is no point now. As a society we/our NGOs need to join forces and bury them in legislation and enforcement

I am shocked by this Chris. Ben

Other celebrities not directly connected to ecological campaigns also condemned the act:

This is terrifying and terrible and heartbreaking

sickening…….makes me shudder as I'm sure it does to all HUMAN beings.

Meanwhile, plenty of people also pointed out the probability that this was sent as a message by someone from the shooting community:

I’m so, so sorry. These people are barbaric, mindless and cowardly thugs and their actions, show that you are effective. The overwhelming majority of us are fully behind you

So sorry. Says it all about these disgusting people & their attitude.
A consequence of the dirty smear campaign orchestrated by @CA_TimB & his nasty organisation.
Please take note of the sorts of people you’re dealing with @michaelgove
Disgusting.

Absolutely awful and just proves the mentality of the people that Chris is trying to protect wildlife from. Chris has given a voice to those who cannot defend themselves. They’re sick in the head.

Completely unacceptable behaviour. Pure intimidating thuggery, sinister development from people who have a problem with a difference in opinion, on how we should care for our countryside.

However, some took it as a chance to have a dig at Packham:

We absolutely condemn such behaviour @ChrisGPackham. We are clear – there is no place for illegality in the countryside. Will you also condemn the illegal behaviour of people who target legitimate rural businesses, such as those who release pheasants from game farms?

I don't shoot but clearly people do, I wonder if you have thought through your campaigns, you meddle & whine about the consequences, I suggest you spend a bit more time listening to those that do & why before signalling your virtue to your fans

Leaving dead animals strung up seems to be a method used to ‘send a message’ by some hunters, shooters and other blood enthusiasts. On 15 January, for example, North Wales Hunt Sabs shared a photo of a dead fox strung up on a road sign. And in February 2017, the Mirror reported that dead ducks were strung up around the Gloucestershire village of Upton St Leonards.

This message is unlikely to intimidate Packham. And the culprit’s threat was lost amidst a huge wave of love and support for the naturalist. But this act is a reminder of just how utterly disconnected some within the shooting and hunting community are from reality.