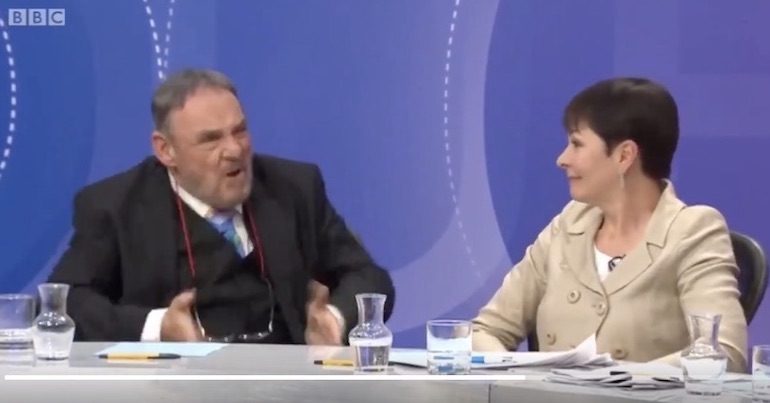 Speaking on the show, John Rhys-Davies defended Donald Trump’s state visit to the UK in June. Many people, including MPs, have openly criticised this visit. But according to Rhys-Davies:

He’s an elected head of state of a great democracy. The last best hope for mankind, if you ask me. And he represents the American people.

At this point, Lucas interjected saying:

But he doesn’t. He lost the popular vote… by nearly three million votes.

And Lucas was spot on. Because in the popular vote, Trump polled 62,984,825 against Hilary Clinton’s 65,853,516 votes. But under the US electoral system, Trump took power after taking 306 electoral college votes to Clinton’s 232. But that wasn’t good enough for Rhys-Davies. He turned on Lucas, slapped the table and roared:

OH, WOMAN! Have you ever read Kenneth Arrow… Any system… of election, has its problems.

At this point, Lucas agreed saying, “yes, the American one and ours, more than most”. Yet, as Rhys-Davies spluttered and literally turned his back on Lucas, host Fiona Bruce moved on to take questions. She didn’t interject or even acknowledge the vicious attack.

John Rhys-Davies loses it & screeches “oh woman!” like a petulant child at a dignified & calm Caroline Lucas when faced with nothing but a simple fact.

This is precisely why facts are so key in public debate these days. #bbcqtpic.twitter.com/RSODbROC1P

Many people openly shared their anger about the exchange on social media:

Others, meanwhile, also challenged Bruce for taking no action “in the face of vile misogynistic behaviour”:

John Rhys Davies banging the table with rage….c'mon Fiona Bruce…why no intervention! Disgusting behaviour. @CarolineLucas you were dignified in the face of vile misogynistic behaviour #bbcqt

Shame on Fiona Bruce for not stopping or chastising John Rhys-Davies for his disgusting disgraceful rant at Caroline Lucas. #bbcqt

Despite the vehemence of Rhys-Davies’ attack, Lucas remained calm, poised and collected throughout. Her grace stood out:

Caroline Lucas showed outstanding class and eloquence on #bbcqt – which this 'performance' by Rhys-Davies did not deserve. Kudos to her for keeping calm and composed during this onslaught – just like women do in boardrooms, councils, seminars across the world 👏 https://t.co/yXgXYgLKY4

As BBCQT host, this isn’t the first time Bruce has been criticised over the way she’s treated women. Her behaviour towards Labour’s Diane Abbott prompted outrage and a series of formal complaints to the BBC from Abbott’s office and viewers. And it’s inexcusable to see this level of sexist vitriol go unchallenged on national TV.