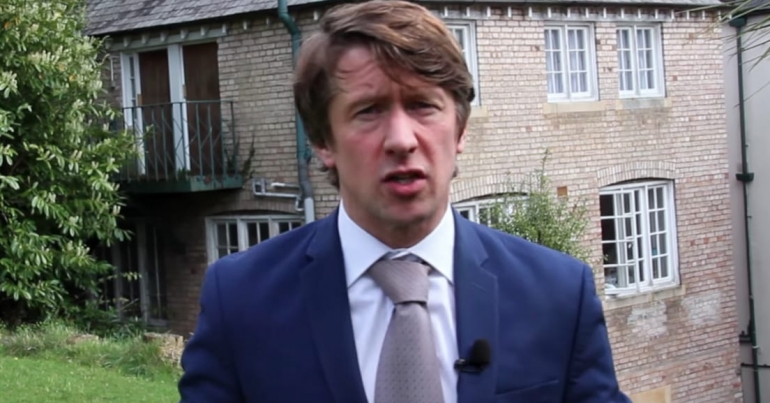 In his latest video, the satirical ‘news reporter’ Jonathan Pie rants about the “idiocy” of the Tories’ response to rising rates of knife crime. The government has slashed funding for the police force and youth centres. Yet home secretary Amber Rudd doesn’t think these factors are relevant.

The home secretary has said that social media, not police cuts, is what’s causing this spike in violent crime rates. Jonathan Pie certainly doesn’t hold back in his scathing attack against this claim. He says:

A crime epidemic hits the country. Kids being stabbed on our streets after years of having youth services being slashed out of existence; police numbers decimated, and the home secretary blames social media. Yep, it’s all those kids Instagramming their dicks to each other that’s the problem, isn’t it?… And the actual fucker who actually cut the police numbers in the first place is our erstwhile home secretary, who now, of course, runs the fucking country, apparently. They’re all fucking idiots. Wilfully idiotic idiots.

As a result of government cuts, the average council in London axed its youth service budget by 36% between 2011/12 and 2016/17. Green Party politician Sian Berry published a briefing document entitled London’s Lost Youth Services [pdf] which found that 30 youth centres were shut down during this period. As The Canary previously reported, Berry argues that these youth clubs can prevent young people from getting into trouble.

The Guardian’s Polly Toynbee links these cuts to rising violent crime, as does Helen Hayes, Labour MP for Dulwich and West Norwood.

The evidence seems to suggest that it’s the quality of the service on offer that helps to reduce the likelihood of children and young people turning to crime. A 2005 study revealed that children who went to poorly supervised youth centres were more likely to commit a crime than those who never attended a youth club. Other factors – such as police cuts – can also come into play in these outcomes.

Rudd is insistent that police cuts have nothing to do with rising crime. And as The Canary previously reported, Sajid Javid failed to mention cuts to youth service budgets as playing a role. It is not just idiotic to deny these factors. It is dangerous.