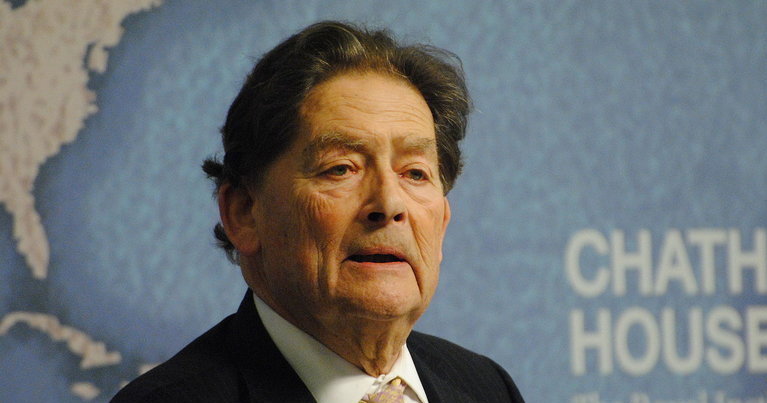 Ex-chancellor Nigel Lawson has applied for French residency. This is the same Nigel Lawson who was also chair of the pro-Brexit Vote Leave campaign.

he has no regrets about Brexit despite living in France – and is applying for his carte de séjour.

A carte de séjour will guarantee Lawson permanent residency rights in France where he lives. He also explained to Connexion that:

he considers the extra paperwork to be among certain ‘tiresome rather than serious’ impacts which Brexit may have on expats like himself.

Many people have taken to Twitter to share their confusion about Lawson’s move. Some asked French president Emmanuel Macron to reject his application:

Or France could just decline #NigelLawson application because he is an embittered superannuated old twat. https://t.co/hkqkvTTAxH

Nigel Lawson, lead Brexiter, who wants UK youth to be stripped of their right to live and work in the EU without barriers, has applied for French residency. *KICKS EVERYTHING IN SIGHT* https://t.co/AhYoKhNBTl

Lawson has given full support for hard Brexit, which would mean fully leaving the EU customs union and single market. But he still wants to live in France:

Nigel Lawson key proponent of hardest possible #brexit & scourge of those with the slightest doubt or fears on brexit….

…has applied for a long term French residency permit.

Leave voters your leaders are laughing at you. They’ll have it all ways round. You won’t.

Essentially, his latest move means he won’t have to deal fully with the consequences of Brexit:

Nigel Lawson continues to defend a botched Brexit but now he is escaping to the sun with an application for permanent French residency.

Yet another elite who won't have to face the consequences of their deal, unlike ordinary Brits who will.

Debra Archer from the Remain in France Together anti-Brexit group shared widely felt concerns with another French newspaper, the Local:

Does this mean he expects the UK to crash out with no deal and no citizens’ rights agreement or is it just that he feels insecure along with the rest of us and would rather have an EU document to prove his rights than rely on the UK government to secure them?

And many people are completely baffled by what they see as the sheer hypocrisy of Lawson’s move:

For once even I’m lost for words! You literally could not make this up! https://t.co/VRFo8ZSUMZ

The ‘patriot’ and former chancellor Nigel Lawson applies for residency in France, where he lives

Another bad boy of Brexit looks to his own self interest while seeing the lives and livelihoods of other Brits suffer: https://t.co/hfM1K1oOA4https://t.co/cPh7YQvrMc

Some have gone further:

Why am I thinking about rats and sinking ships?https://t.co/emNdYReynT

Hopefully @EmmanuelMacron will arrange for his application to be declined on the basis that he is a threat to EU Sovereignty, peace, prosperity and security.
Or just for taking the piss out of UK & EU citizens in every capacity

Brexit is in chaos, with no clear indication of how Theresa May’s government plans to move forward. But one certainty is that things will change for both UK citizens, and EU nationals living in the UK.

So for the 48.1% who voted to remain in the EU, Lawson’s move is a real kick in the teeth. Because when the guy who chaired the campaign to leave wants to live in Europe, it really does suggest Brexit is pretty f*cked.