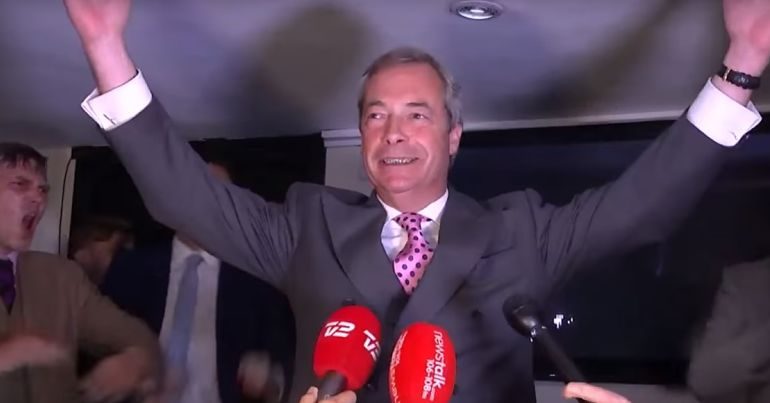 I’ve said it before: draft Farage. Sack May, give Farage a peerage, make him party leader and PM – at least until UK really does properly leave the EU.
Too fanciful? Desperate times need desperate measures; public faith in democratic process now in dangerhttps://t.co/DSOo5sUneT

Give Nigel Farage a peerage, and make him prime minister. That’s her grand plan to restore faith in the “democratic process”. The man who has failed on seven separate occasions to become an MP:

… You've never been a member of frontline politics. You tried 7 times and failed 7 times. If that was a driving test they'd tell you just to use the bus for everyone else's safety.

Thankfully, people on social media quickly called out Phillips’ plan for what it is:

fair play this is the stupidest tweet i have ever seen

The man who has never produced a single detailed workable proposal for leaving the EU despite banging on about it for 20 years? That man? Are you on glue Melanie?

But while the absurdity is amusing, it exposes the dangerous hypocrisy at the heart of many hard-line Brexiteers. In July 2017, Phillips wrote about the myth of “hard Brexit”, concluding that Remainers:

have hijacked the language in order to mask their intended hijack of the democratic process for their anti-democratic ends… Not only is this incipient Remainer revolt anti-democratic – it is also treachery against the interests of the UK itself.

It seems out of character for someone so obsessed with honouring the democratic process to be willing to airlift Farage into office. Especially since the public rejected all of his previous attempts.

So having seen Brexiteers bang on about "unelected elites" and how we need to get rid of them, you want to parachute in someone who has failed seven times to get a seat in Parliament and suddenly make him Prime Minister? This is hilarious!

Maybe she has another agenda?

Your interest, Melanie, isn't the protection of democracy; it's the protection of your broken, intellectually bankrupt, ideologically motivated desire to wreck the UK on the rocks of Brexit in order to create a UK in the image of the social darwinism of the US. ➡️

The Brexit campaign has been defined by its nationalistic agenda. Brexiteers continually advocate that leaving the EU will allow Britain to control its borders:

We must break free of the EU and take back control of our borders.https://t.co/Y97RxxSGP9

Or they abuse people’s love of national institutions:

It is perfectly reasonable to use the £350m figure – actually it is an underestimate https://t.co/P0bGtu4p0v

All nationalists have the power of not seeing resemblances between similar sets of facts… Actions are held to be good or bad, not on their own merits, but according to who does them.

Phillips’ tweet exposes the dangerous hypocrisy of such a position. She has continually attacked Remainers for trying to ‘hijack’ democracy, yet feels that circumventing the entire democratic process in the name of Brexit is completely fine.

It’s almost as if her dishonesty mirrors the entire Brexit campaign.