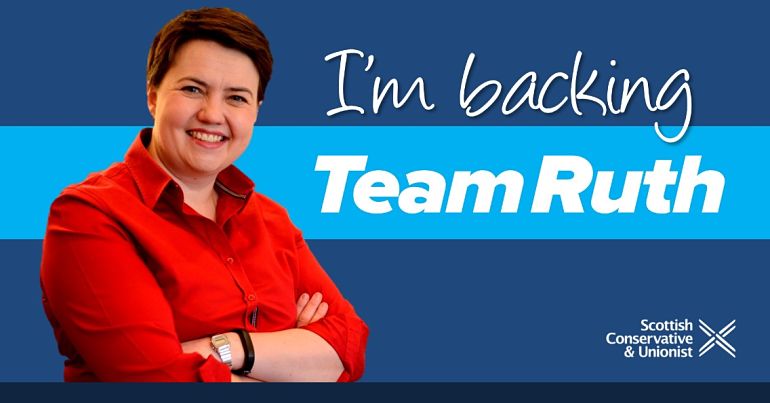 It’s only Ruth Davidson who can lead the fightback against the SNP.

Learn more about how you can help her: https://t.co/IEm4WmkobS pic.twitter.com/V5Be7acdrQ

As the Tories attempted to drum up support for their leader, Twitter certainly didn’t disappoint with comebacks.

The thread of the Scottish Conservatives’ “Team Ruth” post was littered with comments about recent Brexit revelations:

Aye,right! When I was in the supermarket this afternoon wondering if I should start stocking up on canned food like some crazy doomsday prepper. Did I think to myself "Team Ruth" will solve our problems ? Did I f…!

It's her party taking us out the EU

A recent opinion poll says 73% of Scots want to #remain

Will you be using that #darkmoney to obfuscate your election spending?

Some people commented on the secretary of state for Scotland’s claim of a “power bonanza” for the Scottish Parliament after Brexit:

Others raised the absence of Scottish Conservatives’ policies [pdf] that diverge from the UK Conservative Party:

Great, where can I read her policies?

Must be more than that surely? What's her position on tax for instance?

And of course, there is an ongoing call for Ruth Davidson to speak out over the ‘dark money’ allegations:

The chair of Welfare Scotland, Rob McDowall, decided to respond with a video politely declaring he was “Team Nicola”:

When Tories try to be personable

When Tories try to be personable, it tends to backfire. Just like Theresa May when she explained [paywall] how she likes to unwind from her stressful job:

PR stunts don’t seem to go very well for the Tories. Perhaps voters would have more respect for the Conservatives if they’d just get on and call another general election.