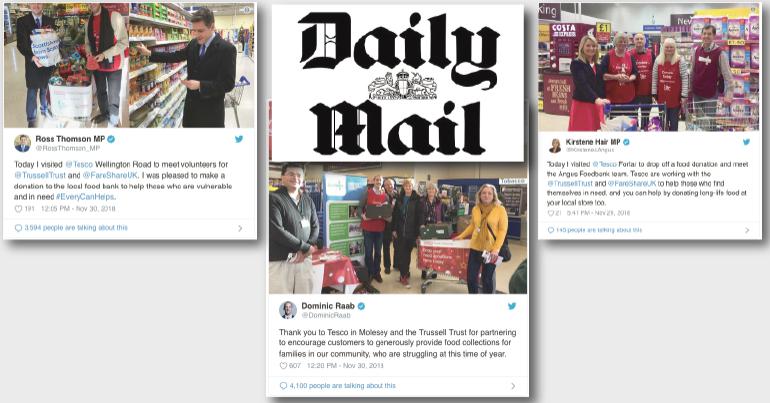 Austerity in the UK has done an obscene amount of damage. It’s led to a big increase in foodbank use and the underfunding of the NHS. Volunteers are helping out in both these areas. But sickeningly, the people who pushed austerity are now trying to improve their image by supporting these charities. Not by trying to halt or reverse austerity, but by promoting a situation in which ordinary people plug the cracks. 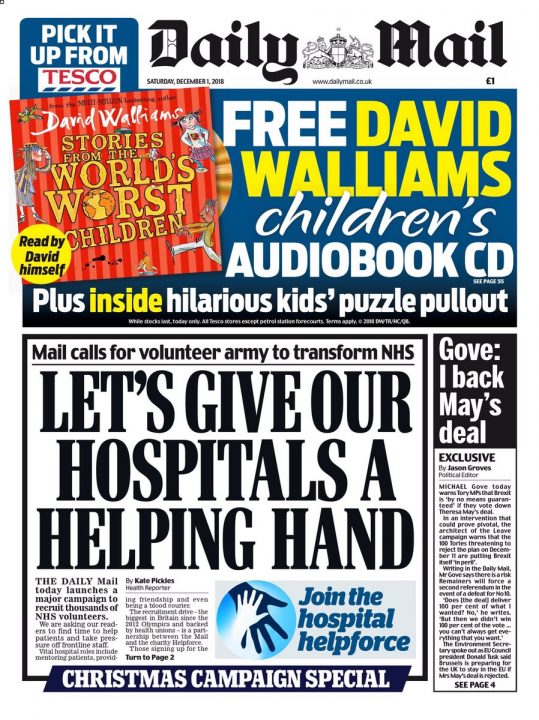 Thank you to Tesco in Molesey and the Trussell Trust for partnering to encourage customers to generously provide food collections for families in our community, who are struggling at this time of year. pic.twitter.com/QkuCgQ8qAl

Foodbank charities like the Trussell Trust do amazing work feeding the people left behind by this Tory government. As such, it’s obviously in poor taste for a sitting Tory MP to show up for a photo opportunity with these volunteers.

The Canary has already covered former Brexit secretary Dominic Raab pulling this stunt, but here are some others:

Today I visited @Tesco_Scotland in #Galashiels with a food donation for the local food bank.@Tesco are working with @TrussellTrust and @FareShareUK to help those who find themselves in need.
You can mark #StAndrewsDay and help by donating long-life food too.@TescoGalashiels pic.twitter.com/p96Wwy7tMh

Today I visited @Tesco Forfar to drop off a food donation and meet the Angus Foodbank team. Tesco are working with the @TrussellTrust and @FareShareUK to help those who find themselves in need, and you can help by donating long-life food at your local store too. pic.twitter.com/3oK5ExaVBr

Today I visited @Tesco Wellington Road to meet volunteers for @TrussellTrust and @FareShareUK. I was pleased to make a donation to the local food bank to help those who are vulnerable and in need #EveryCanHelps. pic.twitter.com/RbSjHixgJX

These are just recent examples, too. Another Angry Voice has catalogued other tweets from recent years:

This is fucking grotesque.

The Tories have created an epidemic of food poverty with their brutal hard-right austerity dogma and their wage repression tactics, & now they rock up at food banks in a sick coordinated publicity drive.

Pure shamelessness from the lot of them. pic.twitter.com/xadJWeq8bc

And as you can imagine, people had something to say about the practice:

If you want to give the impression you've spontaneously donated to a food bank, probably best not to mostly copy and paste whatever the Scottish Tory PR office sent over… pic.twitter.com/oBVoXAMaie

Sorry but I'm not having this latest publicity stunt of TORY MPs visiting & opening FOODBANKS!! You what?!?! How dare you treat us with such contempt; it's YOUR policies driving people to this. We don't want foodbanks; we want an end to Universal Credit & Tory cuts & cruelty! 😡

Is it just me who thinks Tories visiting foodbanks is like a criminal returning to the scene of a crime?

The Tories didn’t perpetrate austerity without help, however. They had backing from much of the media, and yet now the Daily Mail wants to promote itself off the back of this mess.

The Daily Mail, in partnership with the charity Helpforce, has launched a drive to recruit more NHS volunteers. The Mail wasn’t subtle in its aims, as the front page it published read:

Most charities dealing with the effects of austerity aren’t trying to ‘transform’ the country. They’re filling in the cracks that have been caused by Tory policy. It’s telling then that the Mail sees this drive as being transformative – especially when there are lots of other things it could do to actually transform the NHS.

Daily Mail doesn't want to campaign for pay rise for nurses.
Does want a campaign for volunteers to prop up NHS services.

I see today's Daily Mail front page is calling for Mail readers to become 'an army of volunteers to transform our NHS'. So I'm just going to re-attach this thread https://t.co/n7jA6GerCL

The NHS is imperilled by chronic underfunding & understaffing that subjects its staff to intolerable workloads. So many wonderful, dedicated doctors & nurses are beyond breaking point 😔 pic.twitter.com/dbiBmqmf6w

As the Conservative govt, we have cut your NHS to its bare bones over the last 8 years, and now we want you, yes, YOU, to keep calm & come & volunteer to make sure your loved ones are looked after for free.

So what sort of person would fall for the Mail‘s obvious ploy? You may be surprised.

It’s possible to respect the charities working on the front lines without praising the right-wing forces using them to their own advantage. Some people have fallen for it, though:

This is crusading, altruistic, socially responsible journalism at its finest. (And If you’d told me a year ago I’d be saying that about the Mail, I’d’ve laughed in your face.) pic.twitter.com/Ww2Pxxe9LP

People pointed out the problems with supporting the Mail on this: 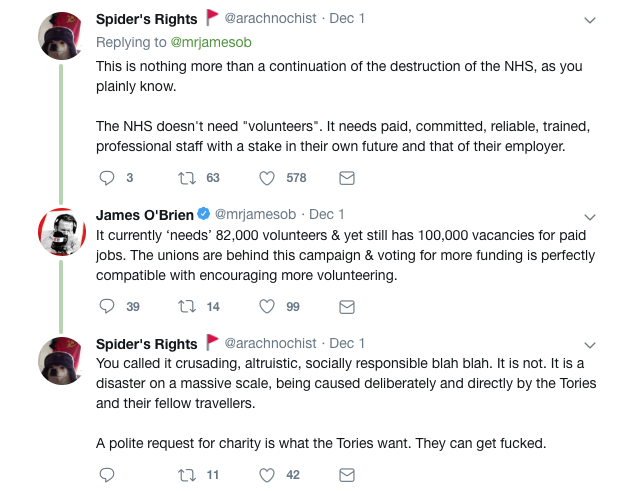 Sorry, but no, it isn't. This is asking untrained people to volunteer in a medical setting after years of pushing the pro-Austerity and anti-migrant messages that starved the NHS of the people and funds it needed in the first place. https://t.co/uLJr8x4G24

The Right: Privatise the NHS
The Left: No just fund it properly
The Centre: Daily Mail readers should run it on their day off https://t.co/chXMdcmGQe

People took O’Brien to task for backing the Mail – not for backing the volunteers. And it’s important to note this distinction, because that’s how this con works. If you try and criticise these right wingers for promoting themselves off the back of the mess they’ve made, they’ll deflect and say you’re criticising hard working volunteers.

That isn’t what people are doing, though. They’re saying that the people behind austerity can’t take credit for the people dealing with it. And they’re right to say that, because it’s true.