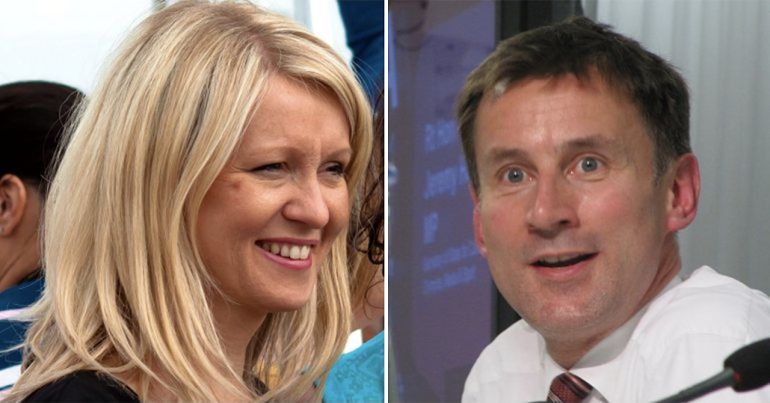 As the first proper week of the Conservative Party leadership contest kicked off, things didn’t go so well for Esther McVey and Jeremy Hunt. Both got well and truly owned live on daytime TV.

Following Theresa May’s formal resignation on 7 June, the week kicked off with leadership hopefuls doing the rounds on daytime TV.

McVey popped up on ITV‘s Good Morning Britain (GMB). As the studio hosts, Piers Morgan and Susanna Reid, handed over to Lorraine Kelly, Reid asked “do you remember Esther McVey from her GMTV days?”. McVey was a TV presenter before going into politics.

After Kelly’s link, Morgan couldn’t help but put the boot in and asked:

So you got on with Esther then… Lorraine?

“Oh,” replied Morgan, for once speaking sense. “If looks could kill”.

this longer version of that Lorraine Kelly/Esther McVey clip might be the most brutal thing I've ever witnessed pic.twitter.com/B8NTPes6uT

Despite Kelly nailing how many people feel about McVey, it’s worth remembering that in March, she dodged a £1.2m tax and national insurance bill. Her defence based around the fact that she’s not an ITV employee, but a “self-employed star” who “presents a persona of herself”. But, it seems, McVey’s vileness is too much even for Kelly’s ‘chatty, happy persona’:

Hilarious that Lorraine Kelly escaped a tax bill bc she said she pretends to be cheery character who likes everyone but she absolutely cannot pretend to like Esther McVey https://t.co/dlZR2Jjeqn

Lorraine Kelly claimed in a court of law that, to avoid tax, she's acting, pretending to be "Lorraine Kelly", a person who likes everyone. She even pretends to like Piers Morgan, just to be professionally. Yet clearly hates Esther McVey so much, she can't even pretend. Glorious.

Meanwhile, over on BBC‘s Victoria Derbyshire, Hunt got the perfect introduction. In a segment discussing who “should be the next Conservative leader?” Derbyshire said to Conservative MP Steve Brine:

You say that the man that you’re backing, Jeremy Cunt… I’m so sorry, Jeremy Hunt.

I’ve never said that before in my life. It’s usually men who say that, so I really, really want to apologise.

Many women – Derbyshire included it seems – work hard to reclaim the word “cunt” so that it’s not used in derogatory terms. But every now and then, when it crops up accidentally to diss someone like Hunt, it does make the perfect insult.

After all, during a nearly-six-year stint as the longest serving health secretary, Hunt systematically destroyed the NHS. So much so, that medical professionals said: “We literally hate you”. And there’s little to celebrate in his current position as foreign secretary. Since taking up the role, he’s upped the UK’s arms sales and pushed a warmongering approach demanding increased defence budgets.

Whilst using a word for male genitals to insult Hunt would be more appropriate, none rhymes quite so neatly.

Who would have thought that daytime TV hosts could throw more shade on the tories than the Labour Party has managed for several years. And all in one morning too. #Lorraine #VictoriaLIVE

So, the first official day of the Tory leadership contest got off to a flying start. When usually mild-mannered daytime TV hosts land the hard stares and insults, it’s truly time to get the popcorn.