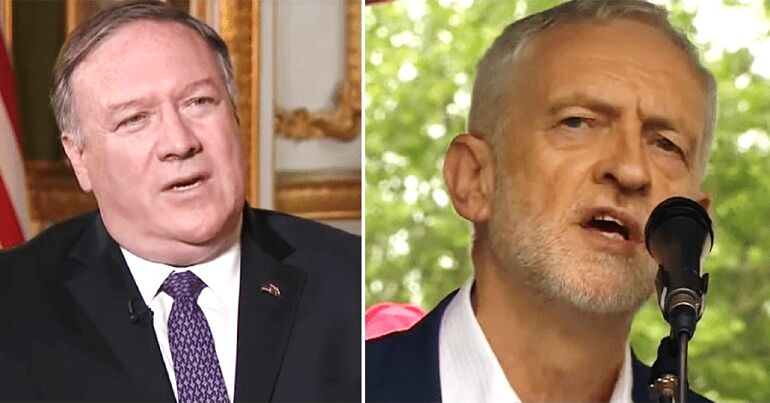 “We will do our level best” to stop him

US secretary of state Mike Pompeo told attendees at the Conference of Presidents of Major American Jewish Organizations that:

It could be that Mr Corbyn manages to run the gauntlet and get elected. It’s possible. You should know, we won’t wait for him to do those things to begin to push back. We will do our level best. It’s too risky and too important and too hard once it’s already happened.

Pompeo was responding to a question about Corbyn and Jewish people:

Would you be willing to work with us to take on actions if life becomes very difficult for Jews in the UK?

The corporate media and political establishment’s propaganda campaign to demonise Corbyn as an antisemite has clearly gained traction overseas. Antisemitism exists in the UK Labour Party. But Corbyn’s political opponents and the corporate media stand accused of inflating the issue to try and destroy his transformational programme for the UK. Antisemitism cases relate to less than 0.1% of the party’s 540,000 strong membership. And Corbyn himself has a long history of fighting for Jewish causes, including signing parliamentary motions condemning antisemitic abuse and campaigning to save a Jewish cemetery from property developers.

Under the cover of stopping antisemitism, Pompeo may have just revealed a little too much about US interference in the UK. A Corbyn premiership would no doubt be a major blow to US foreign policy and crony capitalist interests. And, from 1946 – 2000, the US interfered in at least 81 foreign elections.

In response, a Labour spokesperson said:

President Trump and his officials’ attempts to decide who will be Britain’s next prime minister are an entirely unacceptable interference in the UK’s democracy.

Given Corbyn came within a whisker of winning the 2017 election, analyst Jonathan Cook suggests the US could well already be interfering:

Because the obvious implication of Pompeo's comment is that the US knows it can damage Corbyn without leaving fingerprints at the crime scene – presumably through black ops, image management etc. The elephant in the room: Why assume the US isn't already using those techniques?

In the UK, we have already seen the state-funded Integrity Initiative smearing Corbyn on social media. The organisation, which the foreign office funds, is supposed to be countering Russian ‘disinformation’, yet it attacks the official opposition.

On Twitter, others noted the lack of UK media coverage of the US threatening the Labour leader:

Oh my days. Why isn’t this all over the news? This should be huge.

This intervention must not be allowed to go unchallenged. The irony of the US wanting to meddle in another country's politics though.

The US has a long history in trying to oust candidates that don’t serve its crony capitalist interests. We must be wary of dirty tricks and black ops campaigns against Corbyn and continue to fight for a better world.