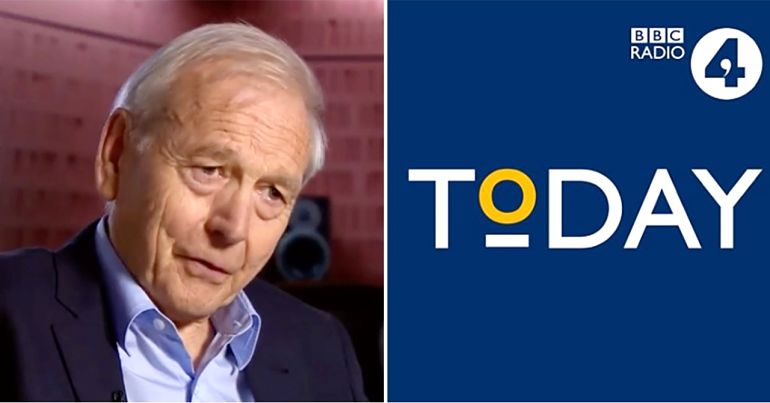 Humphrys announced his retirement in February. In fact, he stated that he should have left years ago. Unfortunately, he’s still on our airwaves. And after his sexist and rude tirade on 14 August, many people are questioning why our supposed public service broadcaster is allowing him to continue.

New rules from the Advertising Standards Authority(ASA) ban ads from “limiting how people see themselves and how others see them and the life decisions they take”. Under these rules, two ads have just been banned for using gender stereotypes.

A bit silly isn’t it?

In the occasional sentences Humphrys allowed Tye to complete, she showed the decision was far from silly. Tye said that the decision was taken after “extensive” study of “academic research”. And she explained that there was:

a series of scenes that showed predominately men in very adventurous scenarios as scientists…being very brave – all the kind of stereotypes you would traditionally associate with men and then the only women in that ad…were shown… sleeping and then right at the end of the ad, there was a woman sitting next to a pram.

Tye said that this type of stereotyping ‘affects aspirations’ and ‘affects career choices’.

Humphrys’ abrasive attitude continued throughout the interview with Tye barely able to get a full sentence out during the segment. He interrupted Tye on at least six occasions during the four-minute interview. On several occasions, Tye was only able to get two or three words out before Humphrys leapt in again.

John Humphrys is so well-informed with his own prejudices.

Well done the ASA rep for calmly holding her line with the academic research and facts.

Anyone done research on his comparative treatment of male and female interviewees?

Humphrys also refused to accept there was anything wrong with gender stereotypes:

John Humphrys sneering at the idea gender stereotypes cause harm or that women aren't naturally better than men at looking after babies. No, there's nothing wrong with being a care giver John. But do you know how much more than a care giver you earn? #r4today #structuralsexism

But if Humphrys’ hectoring and interruptions weren’t bad enough, he topped it off with a dollop of his own prejudice and sexism. Admitting that “maybe I’ll be attacked for this”, he stated: [1:26]

Because a woman looking after a baby is by any estimate, any estimate, a very very good and desirable thing for society. And by and large – and this is – maybe I’ll be attacked for this – but by and large they do a better job of it than men. At least in most of our experience I would have thought….Again I hate to use the expression because they say you’re not allowed to – but isn’t that common sense?

Green MEP Molly Scott Cato put out a call for men to tell Humphrys they are just as good at caregiving:

Can all men who care for their children please let John Humphrys know that they do this in a way just as loving and skilful as women?

Others called on Humphrys to “get out of your patriarchal bubble!”:

You are so wrong, in short, we speak to nurses, doctors, lawyers, stock brokers, teachers, social workers, carers, artists, hairdressers etc who are great their jobs, yet still incredible mothers.

Get out of your patriarchal bubble! pic.twitter.com/07toMhDQk9

Others called the interview “disgusting”:

John Humphrys assertion that ‘women are usually better at taking care of children’ was shockingly backwards, even for this dinosaur. His attitude towards women is well known, BBC should be ashamed to have him on staff. This whole interview was disgusting.

Several people asked why Humphrys is still on the air:

John Humphrys admitted in Feb he should have retired years ago. No one disagreed with him. How much longer will this former Titan of the airwaves keep subjecting us to his vanity project? #TimeToGo

John Humphrys: I should have left Today programme years ago. Well jog on then! https://t.co/veAA2hCNtK

Although, as one person pointed out, this shouldn’t be about age:

Well John Humphrys embarrasses me and I am about 10 years older than he is. He gives us old folk a bad name – the sooner they put him out to grass the better, like now please!

I used to love listening to John Humphrys and all the Radio 4 Today presenters. Not any more. I'm horrified at their bias, the way they interrupt, their arrogance and that they're completely out of touch on important issues. Maybe it's the new normal? I hope not.

Enough is enough. Humphrys shouldn’t be allowed the dignity of retirement. Performances such as this one show that not only should he be sacked, he should have been sacked years ago.