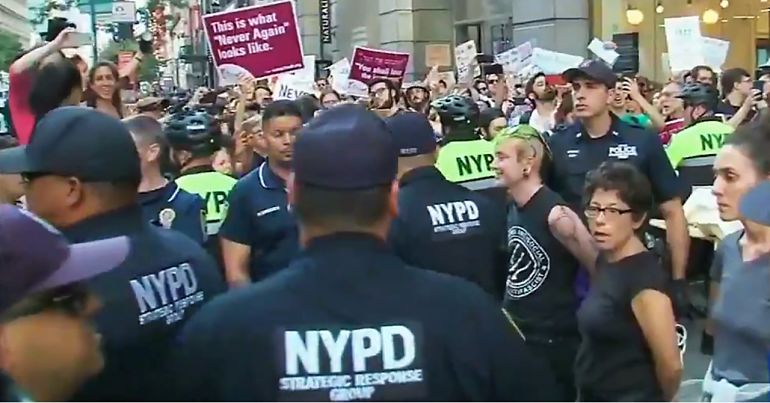 Religious communities across the US have recently been standing up for people at risk from Donald Trump’s anti-immigration policies. Jewish-Americans in particular have been consistently putting their bodies on the line to show their solidarity. And on 11 August, police arrested dozens of protesters in New York City as a result.

Thousands of Jewish Americans participated in protests across the US on 11 August to mark Tisha B’Av, a day of Jewish mourning. As +972 Magazine reported:

Hundreds of American Jewish demonstrators staged a sit-in at one of Amazon’s flagship stores in New York on Sunday, to protest the company’s ties to the big-data firm Palantir, which contracts directly with Immigration and Custom Enforcement [ICE] forces…

The protest, organized by a coalition of Jewish groups including T’ruah, Jews for Racial and Economic Justice (JFREJ), and Never Again Action, as well a number of synagogues, was organized in solidarity with immigrants threatened with deportation by ICE and who are vulnerable to attacks by white nationalist terrorists.

Images of the event were soon trending on Twitter:

We are turning our grief into action and taking to the streets to demand that tech companies stop enabling the deportation machine terrorizing immigrant communities, separating families, and putting children in cages.#JewsAgainstICE #NoTech4ICE #NeverAgainIsNow #ClosetheCamps pic.twitter.com/X9gAjsHdQz

Our neighbors are in danger, every day Amazon sells technology to ICE and their biggest enabler @PalantirTech.

So we have to make them stop. It’s that simple. pic.twitter.com/EDAfPbOlnZ

Amazon provides vital support for ICE to carry out family separation, detention, and deportation. As long as @amazon continues to collaborate with ICE, we will hold the company accountable for every atrocity and every human rights violation that ICE carries out, w/ @MaketheRoadNY pic.twitter.com/gWIWJmhYUm

‘We say, never again.’ — About 1,000 protesters led by Jewish community groups rallied outside an Amazon store in NYC to demand the company cut ties with ICE #JewsAgainstICE pic.twitter.com/IOeA4zhHpD

Activists also explained why they feel so strongly about Trump’s hostile targeting of immigrant communities:

We're #JewsAgainstICE and we're working with @CosechaMovement & allies nationally to disrupt the deportation machine until we get a #DignityPlan.

We're doing what we wish more Europeans did when the Nazis came for our ancestors.#NeverAgainIsNow #CloseTheCamps pic.twitter.com/KUxNUpGopj

Thousands of #JewsAgainstICE are throwing down because this is what we wish ordinary Germans had done in the 1930s.@NeverAgainActn and @CosechaMovement have a question: are you going to take action, or will you be a bystander? @chrislhayes @maddow @andersoncooper https://t.co/usdmZiZSDP

#JewsAgainstICE, immigrants, & allies are out here literally shutting shit down, telling folks that we’re seeing parallels to 1930s Nazi Germany. Jews are ringing the alarm alongside the immigrant communities who have been for years; what will it take for people to listen?

“Never Again is a promise, and it requires action”

As Jewish-American student Sophie Hurwitz wrote for the Independent:

Throughout our childhoods, many of us who were raised within the American Jewish community have had the phrase “Never Again” repeated at us over and over – meaning that we should never allow anything like the Holocaust to happen again. By taking part in these protests, and demanding that ICE be abolished, I believe I am fulfilling that promise.

And for precisely that reason, the New York protests were far from being a one-off. As one journalist wrote:

What is already one of the most significant American Jewish protest movements in over a decade could very much become a longer and more intense struggle by American Jews against the U.S. government’s immigration policies.

Indeed, the protests have continued since 11 August:

BREAKING: #JewsAgainstICE are assembling to shut down their local concentration camp in Houston, Texas.

Never Again is a promise, and it requires action.#CloseTheCamps#AbolishICE#NeverAgainIsNow pic.twitter.com/KvGc2pQbJX

And religious principles remain an important part of the protests, with Never Again Action speaking about the Jewish concept of ‘tikkun olam’. This refers to “acts of kindness performed to perfect or repair the world” and “has become synonymous with the notion of social action and the pursuit of social justice”.

It's hard & scary & emotional for us to participate in these actions.

But we know it's only a fraction of what our immigrant neighbors are experiencing at the hands of the US govt.#CloseTheCamps pic.twitter.com/CTnuVShcZA

The group also stressed that “these values are universal”:

As The Canary previously reported, Trump has long enabled the kind of antisemitic conspiracy theories that have contributed to rising antisemitic murders. His racist rhetoric, meanwhile, has been emboldening the white supremacists behind many of these attacks. And most Jewish-Americans seem to be fully aware of this.

In one recent poll, for example, 71% of Jewish respondents expressed disapproval of Trump. In another, 70% viewed him “unfavorably”. What’s more, 73% thought Jewish-Americans were “less secure than they were two years ago”, with around 60% blaming Trump (at least in part) for recent antisemitic massacres.

But it’s not just that most Jewish-Americans dislike Trump. Indeed, the ongoing ‘Never Again’ protests show that many of them know full well that actively standing up to Trump and his fascist allies is key to dealing a fatal blow to racism.