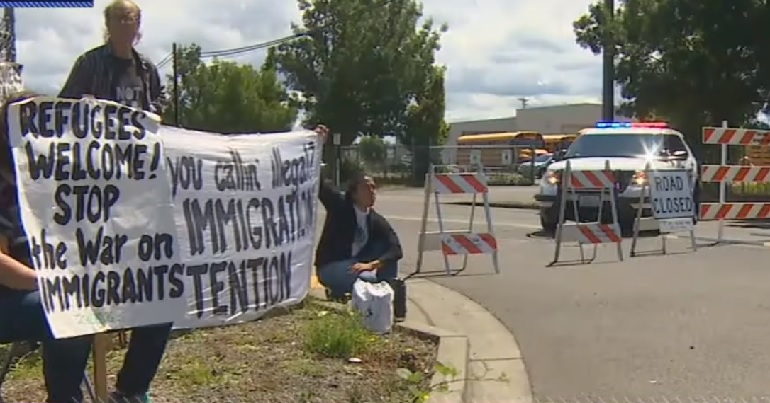 Places of worship across the US are standing up to Donald Trump. In recent days, many have given sanctuary to people at risk from Trump’s latest anti-immigration raids. These are targeting roughly 2,000 people without official documentation. Numerous religious figures have criticised Trump for ‘terrorising’ these people.

On 14 July, New York’s Jewish community united to defend families facing Immigration and Customs Enforcement (ICE) raids due to start that day. According to Haaretz, “T’ruah: The Rabbinic Call for Human Rights joined the New Sanctuary Coalition, a network of houses of worship around the New York area that are offering a haven to undocumented immigrants during the raids”. T’ruah, “which includes more than 2,000 rabbis and cantors”, helped to bring around 70 synagogues together across the US to provide refuge for people at risk. And it slammed the raids as “cruel, immoral, and inhumane”.

The United States should be a welcoming country for those escaping dangerous situations in other countries or who have spent years here building new lives. The raids serve no purpose other than to jail more immigrants and rile up President Donald Trump’s base.

And it stressed that:

The Trump administration is acting like the leaders of the biblical Sodom, whose primary sin, according to rabbinic literature, was their abuse of foreigners and their xenophobia.

Haaretz reported that 11 other synagogues around New York feature “in an online map of churches, mosques, synagogues and other houses of worship that offer a safe space for immigrants who need it”.

Jewish activist Sophie Ellman-Golan, meanwhile, criticised ICE’s “reign of terror”. And she told Haaretz that its raids were an “intentional effort by the federal government to terrorize immigrant communities”.

Everybody is nervous… They are angry, very angry at being terrorized by our president.

Threats of broad enforcement actions by ICE are meant to terrorize communities.

And he encouraged them “not to let any immigration officials into churches without identification or a warrant”.

While many churches sought to defend people at risk, however, one megachurch in Texas went in a different direction. The ‘mission team’ at Prestonwood Baptist Church, for example, decided to minister to Border Patrol agents instead. According to Yahoo News, “Prestonwood’s senior leaders have often been vocal defendants of President Donald Trump and his administration’s immigration policies”.

Places of worship in the US have the special status of ‘sanctuary’. And authorities have long considered them to be off limits. But technically, there’s no law against them entering these buildings.

The complex US relationship with immigration

The US was once a country apparently proud to say:

Give me your tired, your poor, Your huddled masses yearning to breathe free

Indeed, people from foreign lands moving to the US made it what it is today.

the government provides only about one third as many visas as needed by U.S. businesses, primarily in agriculture and construction, even as these businesses are unable to find Americans to fill these jobs.

about half of the farm workers in California are undocumented… they are an essential component of the agricultural business model in the U.S.

Launching mass raids, then, is unlikely to end such immigration. Only issuing an appropriate number of accessible visas to fill all job vacancies would help.

The US could also make a massive impact, of course, by ending its longstanding policy of disastrous interventions both in Latin America and throughout the world. Because many (if not the vast majority) of the people currently seeking asylum in the US come from countries which Washington has smashed into submission.

If the US government had an ounce of integrity or self-respect, then, it wouldn’t be terrorising immigrant communities; it would be welcoming them with open arms.