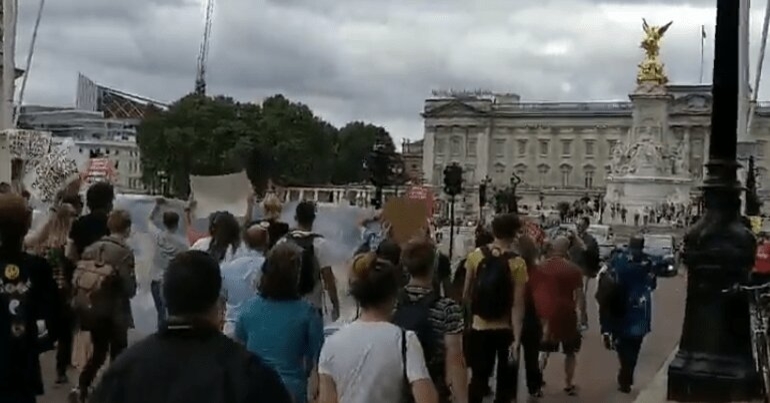 The Queen has approved Johnson’s request to suspend parliament. Elizabeth Windsor couldn’t have refused without bringing the monarchy into a political dispute. It’s a political dispute rather than a clear violation of law because the UK doesn’t actually have a written constitution that upholds parliamentary democracy.

But Windsor approving Johnson’s request still means that the UK has an unelected head of state rubber-stamping an unelected prime minister’s move to shut down the Commons. For many, that’s unacceptable.

Something I don’t think I’ve ever seen in my lifetime… big crowds heading down The Mall to protest outside Buckingham Palace. #StopTheCoup pic.twitter.com/aSey6QlGCG

While many consider the royal family’s role a formality, senior royals have exercised their little-known power to veto new laws in the recent past. A court order forced the Conservative government to reveal the information. And as the Guardian reports:

The new laws that were required to receive the seal of approval from the Queen or Prince Charles cover issues from higher education and paternity pay to identity cards and child maintenance.

There has been an implication that these prerogative powers are quaint and sweet but actually there is real influence and real power, albeit unaccountable

Johnson plans to suspend parliament from “no earlier than Monday 9 September and no later than Thursday 12 September, until Monday 14 October”. This has sparked protests from thousands of people across the UK, as well as at Buckingham Palace.

While the BBC has suggested Johnson’s suspension is a normal occurrence, the opposite is true. The Conservative leader’s parliamentary shutdown of up to 35 days is the longest since 1945. This will have huge consequences. Although Johnson’s ministers cannot bring in brand new (primary) legislation, they can continue changing legislation that was previously delegated to them.