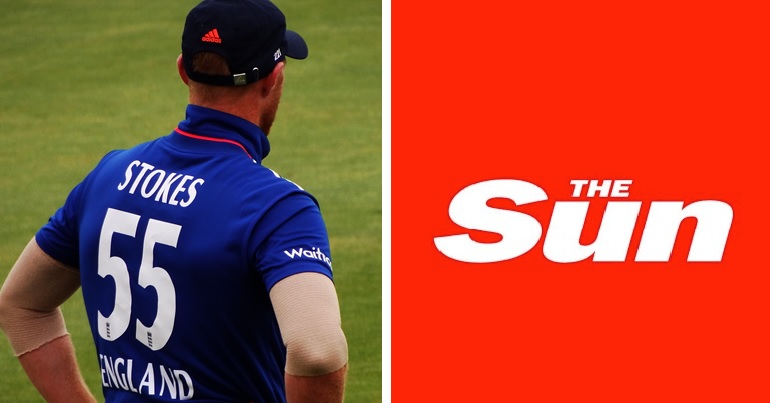 England cricketing hero Ben Stokes has launched a strong critique of gutter tabloid the Sun after its “totally out of order” reporting on his family.

The highly acclaimed cricketer slammed the disgraced right-wing rag for publishing “extremely painful, sensitive and personal details concerning events in the private lives of my family, going back more than 31 years”. Stokes also called the reporting – which apparently contained “serious inaccuracies” – “low and despicable behaviour, disguised as journalism”. And he said:

I cannot conceive of anything more immoral, heartless or contemptuous to the feelings and circumstances of my family.

A Sun staff member had gone to the home of Stokes’ parents in New Zealand uninvited to ask them about the “incredibly upsetting topic”. And as Stokes said:

If that wasn’t bad enough, the Sun think it is acceptable to sensationalise our personal tragedy for their front page.

The publication of the story, he insisted, would have “grave and lifelong consequences for my mum in particular”. And he stressed:

This is the lowest form of journalism, focussed only on chasing sales with absolutely no regard for the devastation caused to lives as a consequence. It is totally out of order.

And in a call to action, he argued:

We need to take a serious look at how we allow our press to behave.

Out of respect for his family’s privacy, The Canary will not give further information about this story.

In response to the Sun‘s reporting, the hashtags #DontBuyTheSun and #BoycottTheSun began to trend yet again. And campaign group Hacked Off quickly offered its support:

Ben we are so sorry to hear about this gross invasion of privacy. Contact the press complaints handler @IpsoNews. The article is likely to have breached the Editors' Code on several grounds including 'accuracy' and 'intrusion into grief/shock'. We can advise further if needed.

A Hacked Off spokesperson, meanwhile, insisted:

This is an appalling invasion of privacy with no public interest justification. We have been told repeatedly by newspaper editors that “everything has changed” since the Leveson report 7 years ago. It is abundantly clear that nothing has changed. Some newspapers are just as incapable of abiding by principles of human decency and basic journalistic ethics as they were during the phone hacking scandal.

The spokesperson then highlighted what they consider to be a major problem in the British media sector today, saying:

The fundamental problem is the total absence of regulation across most of our newspaper industry. The self-regulator IPSO has the power to issue large fines and launch serious investigations into breaches of the Editors’ Code, but it has never done so. …

A serious press regulator would be able to deal with such a blatant transgression of the journalism code. But IPSO, which was set up by the press after the Leveson report, is owned by the corporate publishers and is a puppet regulator.

Others also criticised the ruling Conservative Party for its failure to respond appropriately to the Leveson inquiry:

An appalling few days from the national press: Gareth Thomas hounded, the RNLI smeared, and now this. We were told in 2013 this wouldn't happen again, but @MattHancock @theresa_may @david_Cameron @jwhittingdale broke their promises. Blame them as well as the thug papers. https://t.co/w5A7NTLXsN

This sort of despicable behaviour is exactly what the recommendations of the Leveson Inquiry were aimed at mitigating but which the @Conservatives refused to implement. If you want to change this, consider supporting @hackinginquiry. #DontBuyTheSun #BoycottTheSun https://t.co/3S0cyFXETp

We’ve got news for the billionaire, tax exile press barons: Change is coming.

And with the Sun continuing its ‘despicable behaviour’ with impunity, that change couldn’t come soon enough.