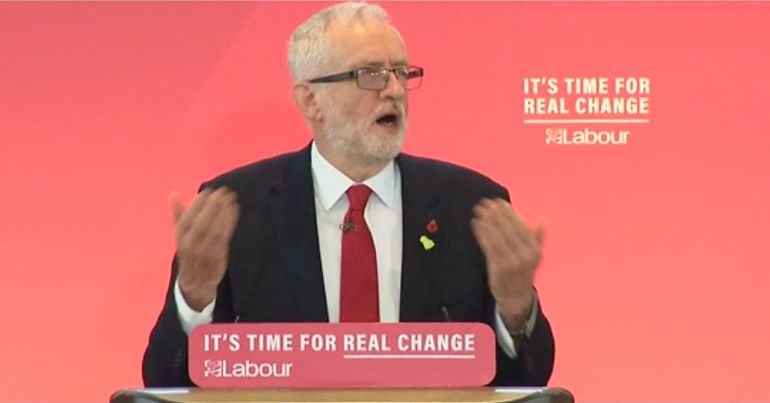 The general election campaign is on. Boris Johnson’s team has long been trying to frame the vote as the ‘people vs parliament’. But Jeremy Corbyn is already blowing this framing out of the water, asking: “Whose side are you on?” And as he made clear, the choice couldn’t be more stark.

With a Corbyn-led government, “we all win”

In his speech in Battersea, Corbyn said that “real change is coming”. He made clear:

The Labour leader pointed out what everyone with the slightest awareness of real life has known for ages: that the Conservatives, with their disastrous austerity dogma, have had the UK’s handbrake well and truly jammed on since 2010. Corbyn said:

This election is a once-in-a-generation chance to transform our country, take on the vested interests holding people back and ensure that no community is left behind.

Labour, Corbyn promised, will end “the Conservatives’ great rip-off by putting rail, mail and water into public ownership so those vital services work for everyone, not just Tory donors and shareholders in tax havens. We will invest in every nation and region, rebuild our public services and give our NHS, schools and police the money they need by taxing those at the top to properly fund services for everyone”.

And Corbyn was in the mood for taking names. He’s not content to talk vaguely of the elite as if it’s some unaccountable force of inevitability. No, these are people, a few obscenely wealthy people, using that wealth to exploit a rigged system. He singled out:

The dodgy landlords, like the Duke of Westminster, Britain’s youngest billionaire, who tried to evict whole blocks of flat where families live, to make way for luxury apartments.

The bad bosses like [Sports Direct boss] Mike Ashley, the billionaire who won’t pay his staff properly and is even running Newcastle United into the ground

The big polluters like [INEOS boss] Jim Ratcliffe, Britain’s richest man who makes his money by polluting the environment.

The greedy bankers like [hedge fund speculator] Crispin Odey, who makes millions betting against our country and, to show his generosity, has donated huge sums to Johnson and the Conservative Party.

The billionaire media barons like Rupert Murdoch, whose empire pumps out propaganda to support a rigged system.

'Whose side are you on?'@jeremycorbyn attacks the UK's billionaires as he pledges to take them on if he wins the election https://t.co/Gg6p7pwS6N pic.twitter.com/S48HAHgQh1

Corbyn said “the choice couldn’t be clearer”. Labour, he said, is on the side of the many:

We put our faith in the British people’s spirit and commitment to community. It’s your country. Labour will put wealth and power in the hands of the many.

We stand for the many. Boris Johnson’s born-to-rule Conservatives protect the privileged few. They’ve slashed taxes for the richest and vital services and support for everyone else.

And Corbyn praised the commitment of Labour’s grassroots supporters, who he said won’t be deterred by a winter election:

Labour will be out there in every city, town and every village with the biggest and most confident campaign that our country has ever, ever seen bringing a message of hope and change to every country and every community that makes up Britain. Even if the rivers freeze over, we’re going out to offer real change for the many not the few. All we need on those cold streets as we walk down them is the thought of removing Boris Johnson’s Conservatives from government – and the chance to rebuild and transform our country.

This is the most radical and exciting plan for real change ever put before the British electorate. Friends, the future is ours to make. Together, it is now time for real change.

This was a message of hope and a call to action. Corbyn has started as he means to go on, with a positive vision for the country. If 2017 is any guide, the manifesto will flesh this out with numerous popular policies. Then it’ll be up to us to make the choice for real change.