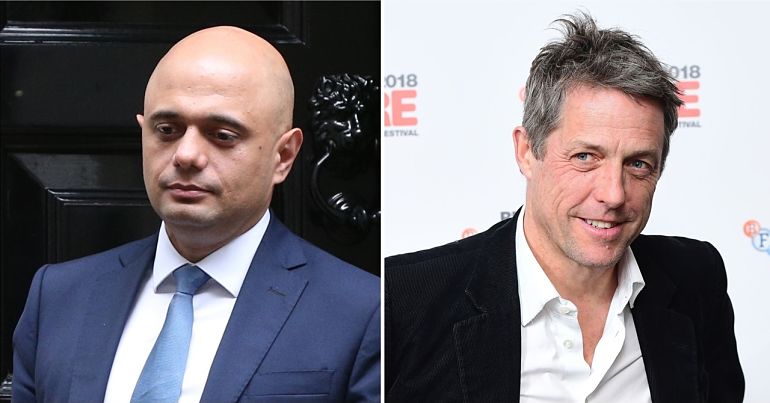 Sajid Javid has criticised Hugh Grant after the actor refused to shake his hand at a film premiere. The chancellor said Grant had been “incredibly rude” at a glitzy event for Martin Scorsese’s new film The Irishman.

I recognised him and put my hand out and said, ‘Lovely to meet you’, and you know what he does? He refuses to shake my hand. He says, ‘I am not shaking your hand’. I am completely shocked. He said, ‘When you were culture secretary you didn’t support my friends in (anti-media intrusion campaign) Hacked Off.’ I think that is incredibly rude.

But a spokesperson for the actor told the Press Association news agency that Grant had a different version of events:

Grant’s words were ‘If you don’t mind, I won’t shake your hand because you were rude and dismissive to the victims of press abuse when you met them as culture secretary.’

Hugh would like to point out that the victims in question were not celebrities. They were people with personal family tragedies who had been abused by sections of the press.

He said Grant was referring to a meeting between Javid and “the victims of press abuse… (who) reported back that his attitude in the meeting was ‘borderline contemptuous’”.

I’m not the elite, you’re the elite

Javid decided that the Grant snub was class warfare pure and simple, saying:

I wonder if people like Hugh Grant think they are part of the elite and they look down on working class people no matter what station they reach in life.

People, let’s call them the elite, the ones with the comfortable upbringing, who went to the best schools – they glide through life, they get second chances, they can afford to screw up, they always have the easy language on the tip of their tongues.

Whereas people like me and you don’t get second chances, don’t have that easy language on your finger-tips, haven’t got that funny anecdote to get out of that difficult situation, so you question your self-confidence.

But of course, Javid should know all about “second chances” and being able to “screw up”. Because he has managed to “glide” from the heart of the industry that crashed the global economy to being chancellor of the exchequer. I guess that’s his “funny anecdote”.

Well done Hugh Grant for not shaking hands with the person who made millions in the lead up to the banking crisis.. I wouldn't shake his hand either…https://t.co/Gvs97h9b8w

Faced with a Labour Party that’s actually going to tackle the inequality that only profits the elite, the Tories are desperately trying to suggest they’re somehow anti-elite as well. But it won’t work. Because even those members of the government who, like Javid, have had a relatively modest start in life have since taken every opportunity to vote against the interests of ordinary people. So they get doubly shown up when the likes of Grant use their undoubted privilege to speak out on behalf of the disempowered and overlooked.