People are reminding Mike Gapes that he's actually left Labour, because he seems to have forgotten - Canary 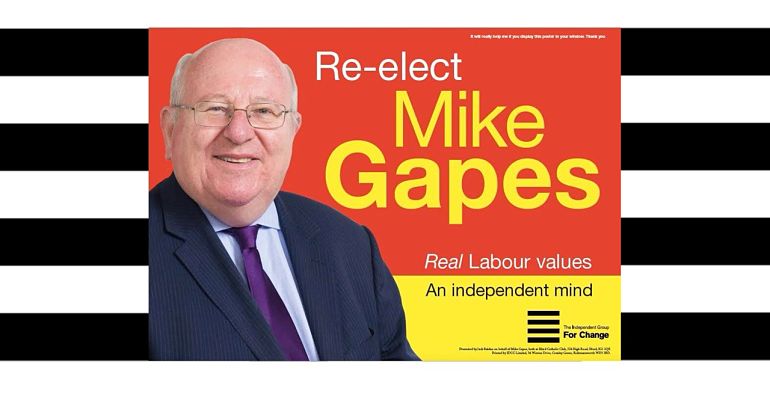 In the 1992 general election, Mike Gapes won the seat of Ilford South for the Labour Party. He’s since retained it six times. And in 2019, he’s running for re-election yet again. His campaign poster has a predictable look to it: 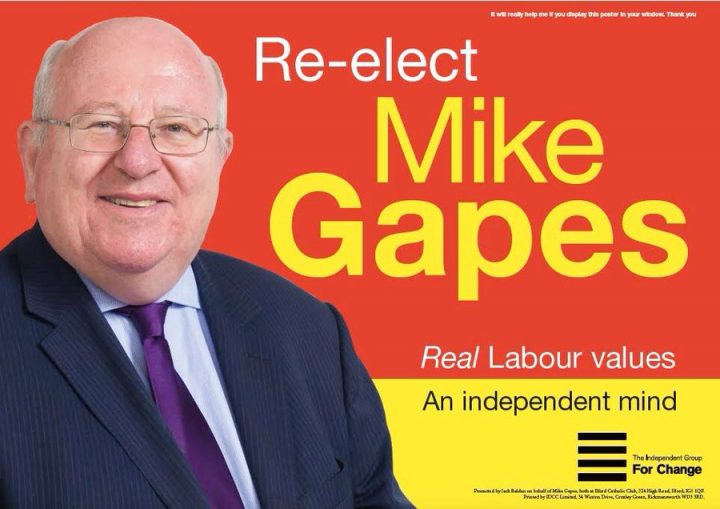 The key elements are what you’d expect. “Re-elect Mike Gapes”, it exhorts. “Real Labour values”, it assures. The red and yellow colour scheme will be familiar to anyone who’s seen previous Labour posters, such as this held by these Ilford South Labour activists: 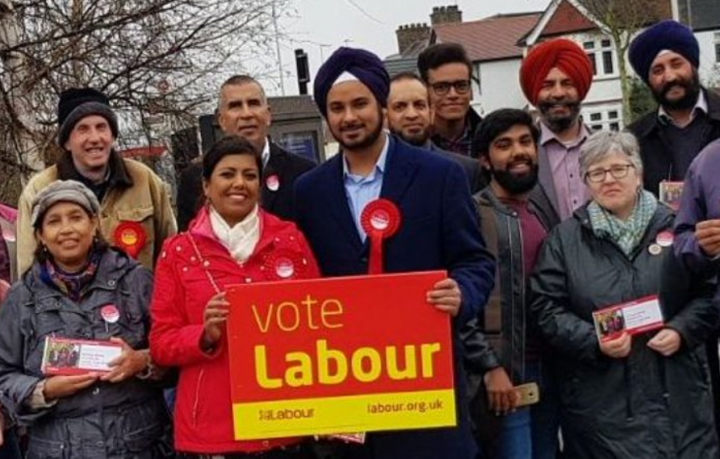 Gapes isn’t Labour. He left the party in February 2019 to form what was initially called The Independent Group. That party has since suffered its own defections, as well as name changes, and now goes by the pithy title of The Independent Group for Change. Eagle-eyed Ilfordians will spot the slightly nondescript TIGfC logo lurking in the bottom right corner of the poster, just above the small print.

Some felt that Gapes’ choice of branding crossed the line from tribute to impersonation:

Graphics and colour scheme stolen from the Labour Party, with the word 'Labour' prominently placed while 'The Independent Group for Change' is relegated to small print in a corner. This displays all the integrity we've come to expect from Mike Gapes. pic.twitter.com/fxtaXwfvQ4

Others just couldn’t believe it:

Wtf is going on here. How dare you.

Since an election first began to look likely, the Ilford South Constituency Labour Party (CLP) has made the situation clear with a pinned tweet:

To avoid any confusion, Mike Gapes is no longer a Labour MP. There will be only one Labour candidate on the ballot paper at the next general election in Ilford South, and that will be the candidate that we democratically select over the next six weeks. https://t.co/CkNdsfGAlR

The CLP is now campaigning on behalf of candidate Sam Tarry, whose publicity helpfully uses the latest evolution of Labour’s colour palette:

10,000 leaflets handed out in past 24 hours as part of @IlfordSouthCLP ‘Transport Tuesday’! Proud of the dozens of volunteers helping. We are building a movement from the grassroots up. #RealChange https://t.co/GcFlwuj38C

Gapes has claimed in the past that he doesn’t need a by-election to confirm his popularity with the people of Ilford South:

Because I was elected by my constituents for the seventh time on the basis of my record and my views. And I promised them in my election address that I would be a strong pro European voice in Parliament fighting hard to stay in the Single Market and the Customs Union. And I am https://t.co/zH274x7xaF

But now voters will have the opportunity anyway. And it’ll be a choice between a genuine Labour candidate, standing on the Labour Party’s manifesto, or Gapes. And judging by the way people have seen through his attempt to nick Labour branding, he’ll be in for a tough ride trying to convince people he believes in Labour values.