The government's latest initiative is full Jeremy Kyle - The Canary 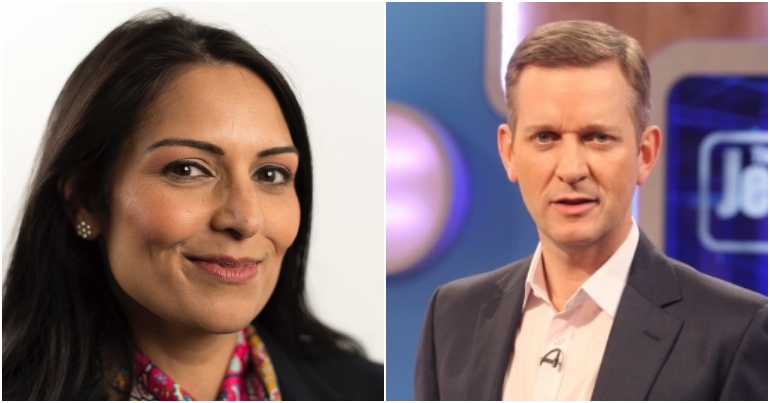 On 21 January, the government announced plans to introduce “polygraph testing” for convicted terrorists. This comes as part of a wave of measures described as a “major overhaul” in the way terrorists are punished and monitored. As home secretary Priti Patel pushes forward with draconian counter-terrorism legislation, this latest move led to criticism that the government has gone full Jeremy Kyle. Because there are serious questions about the accuracy of lie detector tests.

“Our justice system is not the Jeremy Kyle show”

A joint statement from the home office and ministry of justice announced plans to double “the number of specialist counter-terrorism probation officers” and introduce “measures such as polygraph testing”.

Terrorists could be forced to take a lie detector test to prove they have reformed and are not planning another attack, the government has announced https://t.co/3ZMIvGJkqC

But there are serious questions about the credibility of so-called lie detector tests.

Professor Aldert Vrij, a senior lecturer in psychology at the University of Portsmouth, told the BBC in 2018: “It does not measure deception, which is the core problem”.

Others also suggested the stress of taking lie detector tests can give the wrong results, indicating an innocent person is lying.

The FBI reportedly asks new staff to submit to a test when they join. But according to the American Psychological Association, “there is little evidence that polygraph tests can accurately detect lies”.

Jonathan Swain, a barrister specialising in extradition, pointed out one vital detail:

We don't use polygraph tests in criminal trials because we accept they aren't accurate. So why do we think it's justifiable to use them in licence conditions? If they aren't evidentially accurate, the context doesn't matter. Our justice system is not the Jeremy Kyle show.

Although lie detector tests aren’t admissible in UK courts, according to the Guardian:

their use within the probation service for monitoring offenders is increasing. Sex offenders and domestic abuse perpetrators are already subject to the technology, and failures to pass a test can lead to further investigation or supervision.

The return of “that fucking Tory Jeremy Kyle”

In May 2019, the Jeremy Kyle Show came off-air. But appallingly, it took the tragic death of a participant to end a vile show that abused people’s vulnerability for fourteen years. The show was notorious for its use of lie detector tests.

The government’s latest announcement got Jeremy Kyle trending on Twitter:

Can you imagine if Corbyn came up with this idea of lie detector tests for terrorists? There would be bedlam, the internet would melt, and some unbalanced Brexit Party MEP would call for his execution.

I knew they’d find a way back in for that fucking Tory Jeremy Kyle though.

One person pointed out that even Jeremy Kyle’s producers knew the problems with lie detector tests:

Lie detectors do not work.
They can be easily fooled or give false results because the subject is nervous.
They are not legal for use in trials.
Even Jeremy Kyle producers admit they didn't work, despite their claims on the show.
Using them like this is utter nonsense. https://t.co/RGYZq79IEO

“Actually an admission of failure”

Following the inquest into the deaths of people killed during the London Bridge attacks, the government is rushing through a range of draconian counter-terrorism measures. But, as shadow home secretary Diane Abbott explained, this is too little, too late and fails to tackle the deeper issues:

After 10 years in government, a major overhaul now is actually an admission of failure. Major terrorist outrages have occurred all too frequently, including attacks by perpetrators who were known to the security services.

The fight against terrorism has been undermined by cuts to policing, including community policing, a lack of effective coordination between police and security services as well as the flawed Prevent programme. All of these need to change if we are going to improve the safety of our citizens.

While no one would ever defend the perpetrators of such tragedies, the new legislation is deeply flawed and problematic. Not only does it blur the lines between lawful protest and actual terrorist offences, it sets the tone for increased police powers under Johnson’s right-wing government. When our government lifts tactics from the worst of daytime TV, we should all be worried. We need to fight back against these measures, and start that now.