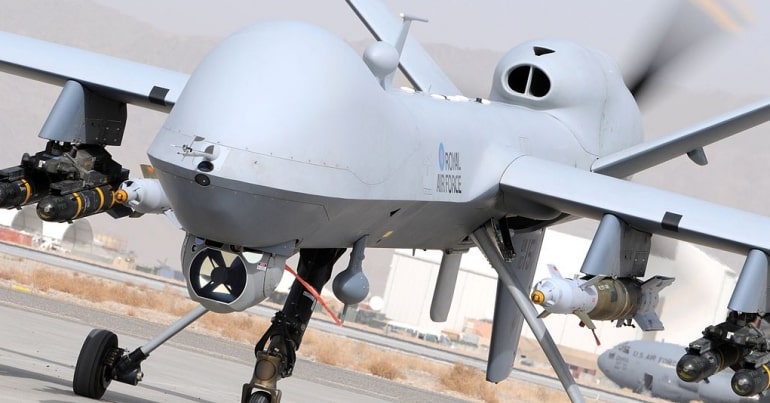 The British government has been normalising assassination by drone through a veil of “quasi-secrecy” and careful media manipulation, according to Drone Wars UK. The UK-based group published the report In The Frame on 19 January. It argues that remote-controlled assassination has become more accepted as the government characterises high profile targets as ‘the worst of the worst’, who pose an imminent threat. Drone Wars UK warns that this form of killing is “eroding human rights norms”, despite assurances from military officials that drones are used just like any other weapon.

Lowering the threshold for war

Chris Cole, director of Drone Wars UK, told The Canary that there are important differences between drones and other weapons of war. Firstly, he explained that drones can remain in position for around 20 hours, compared to seven hours before an airforce pilot suffers from fatigue.

But more importantly, because they are remotely piloted, the use of drones means states are “not putting our troops in any danger or risk”. Drones are therefore “particularly problematic”, Cole said, because their use “transfers the cost of war from soldiers to civilians”.

In using these systems, states can engage in warfare now – with virtual impunity. It lowers the threshold for use of force. In the past there was a political cost to going to war; the public did not like seeing their young men and women going overseas and then coming back in wheelchairs or coffins.

He argued that these “political costs” influenced a politician’s decision making before taking military action. “Without those potential political costs the threshold is lowered. We will simply see much more warfare now”, he said.

Cole said that since 2015, when the UK made its first foray into the targeted-killing-by-drone club, other states have started to use drones. “Turkey is already using them in Iraqi Kurdistan and Syria as well”, he pointed out, “in the battle field, but also targeted killings as well”. The UAE is also using drones for assassinations in Libya, he said.

The media plays its part

According to the report, the establishment press pays its part in normalising remote-controlled assassination. By the UK government refusing to make public its policies on targeted killing, accountability and transparency “remain elusive”. Researcher Dr Joanna Frew, the author of the report, examined four news outlets’ coverage of drone killings: the Guardian, the Times, the BBC and the Daily Mail.

Frew found that the “government line” was much more present than not and that this was especially obvious with the BBC. 77 out of 112 (68.75%) BBC articles had statements supportive of the legality of drone strikes and in the case of the Daily Mail, 140 out of 226 (61.5%) statements were supportive of the strikes.

Cole: We have opened a “Pandora’s Box”

Cole said that “we need to have a rules-based system” otherwise the world will simply become a “more dangerous place”. “There are always people who will say: ‘these people are terrorists, these people are the worst of the worst'”.

“It is very easy to designate people as terrorist and then take them out as bad guys, but it opens a Pandora’s Box”, Cole warned.

He also pointed out that “time and time again, in so-called precision strikes, we see civilians killed” due to faulty intelligence or an equipment failure. “The whole idea that we can take out the bad guy and make the world a safer place is simply wrong”, he said.