A brilliant new Labour MP is shredding the Tories - Canary 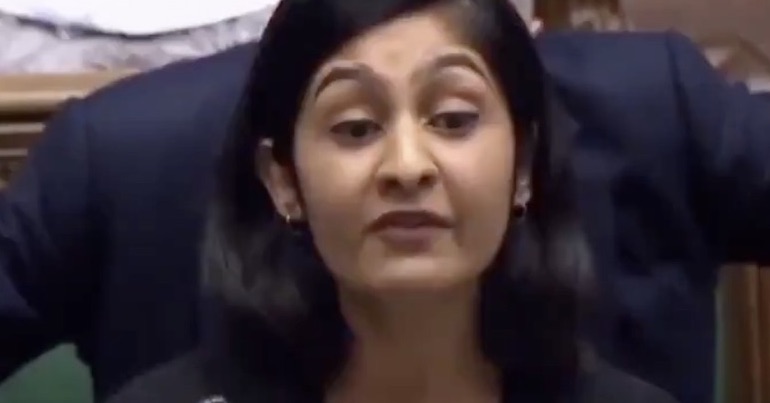 Zarah Sultana, one of the newest Labour MPs, is absolutely shredding the Tories. Less than a month into 2020, she keeps stepping up to speak truth to power.

What recent assessment her Department has made of trends in the level of in-work poverty?

DWP under secretary Will Quince simply trotted out the same old Tory response. He failed to answer the question, and insisted there are “3.8 million more people in work”, which totally ignores rising levels of in-work poverty.

Sultana took him down. She pointed out:

just 33 working hours into January this year, FTSE 100 bosses had already earned more than the average worker makes the entire year. And since [the Conservative Party] came into power, wages have faced their biggest peacetime squeeze since the Napoleonic era. But now there are more than 4 million people in work, but nonetheless in poverty.

“But it shouldn’t be a surprise,” Sultana continued, “that the economy works for the super-rich and fails for everyone else, when the party opposite is funded by one third of UK billionaires”.

And to finish Quince off, the Coventry South MP added:

So given this shameful record, why should my constituents believe a word this sovernment says on tackling the scourge of poverty pay?

One third of all UK billionaires fund the Conservatives.

Of course they've spent 10 years letting the rich get richer and ignoring everyone else.

My question on why we can't trust them on poverty pay 👇🏽 pic.twitter.com/xJPYy8pSxx

Full Fact reported that around 14.3 million people in the UK now live in poverty. Of these:

Tory MPs continually boast about “record high” employment. Yet, what they fail to mention is the number of these jobs that are precarious zero-hours contracts. As The Canary reported, not only is the UK’s wage growth far behind other countries, but 844,000 people in the UK are also on zero-hours contracts. Many people on low-wages now rely on Universal Credit.

In 2015, Iain Duncan Smith, then DWP secretary, claimed that Universal Credit “guarantees you will always be better off in work than on benefits”.

But as the past five years have shown, under Universal Credit, work doesn’t necessarily pay. Universal Credit has forced some people to use food banks and made others homeless.

And according to the Financial Times:

The 2010s saw living standards in the UK grow at their slowest rate since the second world war, even though… employment grew at a record rate.

According to the High Pay Centre thinktank:

FTSE 100 CEOs only need to work until just before 17.00 on Monday 6 January 2020 in order to make the same amount of money that the typical full-time employee will in the entire year.

But even this shocking figure doesn’t tell the full story. Because it’s based on an average full-time salary of “£29,559 in 2018, equivalent to £14.37 an hour”. Given that the current hourly minimum wage is £8.21, even Boris Johnson’s proposed raise to £8.72 won’t take most workers anywhere close to £29,000. This also masks the surge of insecure zero-hours jobs.

In 2019, according to the Office for National Statistics, the “proportion of low-paid part-time employee jobs” was triple that of full-time jobs. Dig deeper, and the government’s own statistics reveal:

Between April 2018 and April 2019, 35.7% of full-time employees experienced a real-term pay decrease or pay freeze.

In 2019, Labour’s Ian Lavery quite rightly called the Conservatives the “party of the billionaires”. And Sultana’s spot on, because the Tories truly do have a “shameful record”. Johnson’s majority government pivots on the rich getting richer while even those working continue to get poorer. We can’t trust them at all. But at least with MPs like Sultana in the Commons, someone’s holding them to account.