Thanks to protesters, Boris Johnson's Cornwall trip didn't quite go to plan - Canary 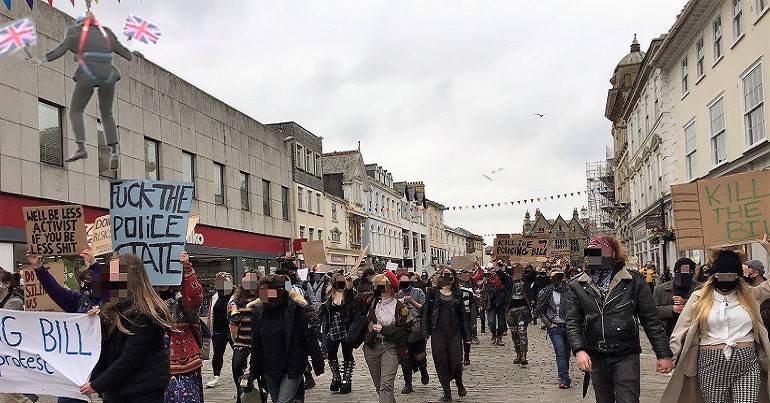 A campaign group has claimed Boris Johnson “bottled it” over a part of his visit to Cornwall. The reason for the PM’s scarpering could be the protesters waiting for him. Of course, Downing Street denies this. But who would you believe?

The Resist G7 Coalition is a campaign group which formed for the upcoming Group of Seven (G7) meeting in Cornwall. The government calls the G7 the “world’s leading democracies”. In reality, it’s the world’s leading corporate capitalist crooks and imperialists. So, Resist G7 will be carrying out action around the summit. But ahead of this, Johnson was in Cornwall. He had a non-socially distanced ‘business’ meeting in a café on 8 April:

Here's where BoJo has been this morning. Truro…in a Café! No social distancing, no masks, more than two households, indoors! One rule for us and one for him! Photos were quickly removed from the FB page which posted them. Why was that? pic.twitter.com/HJPgo3OWK1

On 7 April, he was supposed to have other plans. These are the plans that people are claiming didn’t end up happening.

Resist G7 said in a statement:

Johnson was due to visit Falmouth, Cornwall on 7 April. However, he abandoned parts of his trip after local Resist G7 [RG7] and Kill the Bill protesters found out about his visit.

Protesters gathered on Church Street in Falmouth but despite a massive security operation, the prime minister failed to show up.

This is a massive victory. It’s clear that Johnson bottled it. He wasn’t prepared to face the reality of what people in Cornwall really think of him.

The Canary understands Johnson was due to visit a book shop in Falmouth for a publicity event. But eye witnesses told us that Johnson’s car got near to the shop, saw the protests, and promptly turned around again.

A spokesperson for Kill the Bill Cornwall told The Canary:

Boris Johnson is denying that his trip to Falmouth was disrupted. However, we know where he was due to go and we know he didn’t turn up. His car was also seen turning around and driving away from the location. He did have other meetings in the town – but we know he didn’t make it to this one.

We have a prime minister who is a serial liar. He was never going to admit that he bottled a planned visit because of protesters.

The events in Falmouth shows that protest works. And the fact that Johnson didn’t have the courage to face his critics shows exactly why this cowardly government wants to ban protests.

Cornwall Live reported Johnson was at a “private meeting”. It also said Downing Street denied Johnson was due to make a public appearance in Falmouth. A spokesperson said:

The PM was in Falmouth yesterday afternoon for a political visit so I’m unable to provide further detail but it’s incorrect to say he didn’t go.

Johnson did indeed go to Falmouth – but according to the protesters, didn’t make it to all his engagements. And given it was in the local press, it was hardly a “private meeting”.

Who would you trust? Johnson: a serial liar, racist, homophobe, and misogynist? Or grassroots activists defending all our rights?

“We will not be silenced”

Cornwall is also leading the charge for the Kill the Bill movement.

On Sunday 11 April at 2pm, there’s another demo over the Police Bill. Kill the Bill Cornwall told The Canary:

Following the amazing work of Kill the Bill and Resist G7 protesters in disrupting Boris Johnson’s plans, Kill The Bill Cornwall is returning to Falmouth on Sunday.

Wear masks, bring hand sanitiser, remember social distancing and let’s send a clear message that Cornwall is not going to stop taking to the streets until this bill is defeated.

More details on the protest are available here.

The toxic G7 and the toxic Johnson

But Johnson’s escapades in Falmouth point to a wider issue in Cornwall. As Resist G7 said in a statement:

During Boris Johnson’s trip to Cornwall, he announced a £23.6m fund for Truro part of which will be used for turning a park into a tourist destination. However, he said there wouldn’t be any money set aside to replace the £100m a year Cornwall receives from the EU for being one of the poorest areas in Europe.

We are sick of Cornwall being a playground for the rich. We want to build a Cornwall that works for those of us who live here.

In parts of Cornwall, one in three children are living in poverty. This is the reality of Cornwall. It’s a place of extreme hardship not somewhere for a photo op with an ice cream.

But what is happening in Cornwall is a microcosm of how the G7 operates – a system where the leaders of the richest countries in the world come together to implement a world agenda that benefits the 1%. The leaders who come to the G7 won’t see or care about the poverty on the doorstep of their fancy hotel. And they certainly won’t see or care about the misery their policies inflict on the Global South.

What more needs to be said? A PM offers crumbs off the government’s table to one of the poorest areas of the UK. And then, when faced with the possibility of being held to account, he shits himself and runs. What a wanker.

Featured image via Resist G7 and the Sun – YouTube