Boris Johnson's England video will scar you for life - The Canary 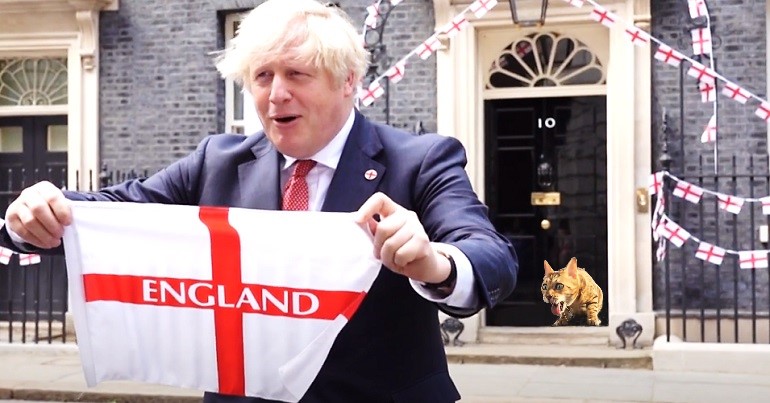 Boris Johnson’s latest video about England’s Euro 2020 journey is short and to the point – to the point of making you feel nauseous, that is. But it also hints at a broader issue in our society.

The PM has once more indulged in nationalistic flag-shaggery over the England team’s performance in the Euros. As many people prepare to watch them take on Italy in the final on Sunday 11 July, Johnson made his own contribution to the nation’s excitement. It was enough to put you off football (and the English flag) for life.

Best of luck to England tonight. It’s been an incredible journey so far. But we’re all hoping you can go one better and bring it home tonight.

We’re all hoping you can go one better and bring it home tonight @England.

Of course, much of Twitter wasn’t having any of Johnson’s bandwagon-jumping bullshit.

As several users pointed out, Johnson initially didn’t call out fans who booed the team when some of them took the knee. Nor did he endorse the players’ stand against racism:

Didn't you want people to boo the team?https://t.co/g3UroopYJG

Will you be taking the knee to show the level of your support for the team and the concept of tolerance and equality. Or will you boo it?

Meanwhile Barbara thought Johnson may be trying to distract us from other issues:

All in @10DowningStreet are hoping you can bring it home for me so I can distract you from 150,000 dead…tens of thousands suffering from long Covid & I have the 'feel good factor' before I swan off on another free holiday from an anonymous donor during recess.

Others questioned whether the PM was really a footie fan, while doing some neat photoshopping:

One person made a point about the cost of Johnson’s flag-shaggery:

Have you got any idea how all your flags, your bunting, your personalised football shirt appears to someone Universal Credit?
You’ve probably spent more on all that than a person on UC gets to live on in a month!
Sickening display of ignorance and thoughtlessness.#levellingup ? https://t.co/LvFOIbNYfF

Former Labour Party general secretary Jennie Formby cut through the bluster of football. She highlighted that:

Horrible statistic that when England win, domestic violence increases by 26%; when they lose it increases by 38%.
24 hour National Domestic Violence helpline 0808 2000 247 pic.twitter.com/4mG7HVfgLA

An inflatable ball: uniting us more than dead disabled people ever could

Rachael Swindon also pointed to another, broader point about the Euros:

Whatever the result tonight, Gareth Southgate and his team have unified many of us in a way no Tory government could ever manage.

I’m not a huge football fan, but I am proud of what they have achieved, both on and off the pitch. #ComeOnEngland

This is the bittersweet reality of national pride in football. The establishment pushes the narrative that the country is all behind the England team. For many of us, it is a source of pride, excitement, and pleasure. A lot of the time, the country does appear to rally behind a unifying cause in football. But it’s a shame that that’s all we tend to unite over.

Tory policy killing sick and disabled people in their tens of thousands; homelessness skyrocketing; millions of children going hungry; over 150,000 possibly preventable deaths from coronavirus; and older people not being able to heat their homes in winter. The list of things that should unify us as a society goes on and on. Yet, none of it ever cuts through.

If we could channel that common passion for football into changing society for the better, then maybe many of the issues that blight England, and the rest of the world, could be solved. Sadly, unless there’s a ball and a flag involved, that seems unlikely to happen.