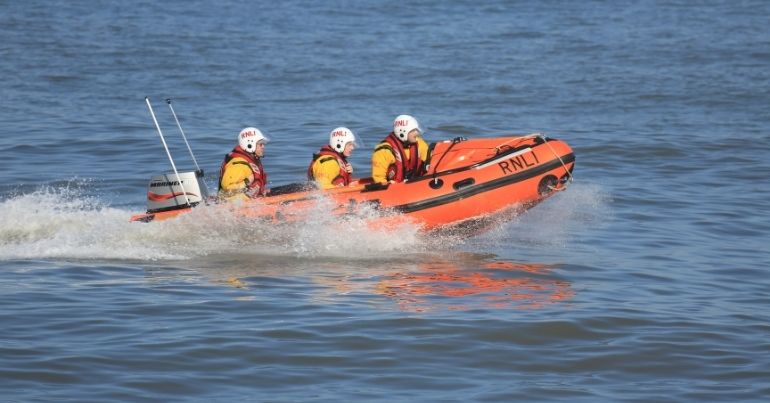 Right-wing commentator Nigel Farage has attacked the Royal National Lifeboat Institution (RNLI) for its work saving the lives of migrants at risk of drowning in the English Channel. In a statement responding to attacks from the right, anonymous RNLI volunteers shared their first-hand experiences of humanitarian rescue missions. This includes reports of abuse directed at ill, exhausted migrant families coming ashore.

People quickly took to social media to express their support for the charity and the work its volunteers do. It looks like attacks from Farage and other right-wing culture warriors may have prompted a rise in online donations to the voluntary offshore rescue service.

Attacks on the RNLI

In his latest attempt to stir up anti-immigrant sentiment, Farage attacked the RNLI, calling it a “migrant taxi service” that facilitates immigration to the UK. Right-wing commentator Darren Grimes chipped in with an abhorrent couple of tweets, suggesting that the RNLI should refuse to help migrants at risk of drowning to “end the expectation that anybody can get to Britain illegally”. These attacks come after home secretary Priti Patel proposed a new immigration bill which could potentially criminalise RNLI volunteers who help refugees and asylum seekers at sea.

Responding to the attacks, RNLI chief executive Mark Dowie issued a statement saying that the volunteer rescue service is “incredibly proud” of its lifeboat crews’ work at sea. Sharing their first-hand account of an English Channel rescue mission, an anonymous RNLI volunteer recounted being confronted by an “angry mob” shouting “F*ck off back to France” at the lifeboat crew and two migrant families with small children. Another crew member said that a “drunken yob” threw a beer can at a group of migrant women and children, while others hurled abuse. Hitting out at attacks from right-wing culture warriors such as Farage, the RNLI took to social media to post:

We're proud of the lifesaving work our volunteers do in the Channel – we make no apology for it. Those we rescue are vulnerable people in danger & distress. Each of them is someone’s father, mother, son or daughter – every life is precious. This is why we launch: pic.twitter.com/lORd9NRpdP

Standing with the RNLI

Reacting to the RNLI’s dignified response, Farage doubled down on his comments, telling GB News viewers that the RNLI has become “a taxi service for illegal trafficking gangs”. However, the RNLI was met with an outpouring of support from people on social media.

This is where the hate whipped-up by the likes of Nigel Farage, Priti Patel & the right-wing press has led us:@RNLI – a charity that saves men, women & children from death at sea – is being forced to justify their heroic work.

Shame on the bigots whose hate diminishes us all. https://t.co/yrmlD4Ks77

Emphasising the important work the RNLI does at sea, Migrant Voice UK shared:

#WeStandWithTheRNLI and its work rescuing migrants.

"A number of our members have been rescued by the RNLI while crossing the Channel," says MV director @NazekRamadan.

"We know how essential and life-saving the RNLI’s work is."

Calling out the racism inherent in attacks on the RNLI for rescuing migrants at sea, Max Morgan shared:

I wonder whether the fucking arseholes attacking the RNLI for rescuing refugees would have them ask the colour of the people in difficulty before deploying a lifeboat?

Or would they prefer them to rush into the sea regardless, but turn back if they see drowning brown people?

Expressing his dismay at the state of the nation, Jon Jones said:

RNLI is made up of people who volunteer to risk their lives to save others, sometimes to the point of losing their own lives.

What an ugly little nation we have become that we wish others to drown and threaten those that save lives.

Any nation which finds itself debating whether lifeboats should save people at sea is in truth engaged in its own moral death.

Donate to the RNLI

Beyond depressing that saving human life is work that an organisation is forced to ‘defend’. Migrants are human beings whose lives matter. Thank you, @RNLI for all that you do. https://t.co/FY2IidVvaD

Keep up the great work @RNLI because as some of your disparagers repeatedly told us All Lives Matter.

Thanks for the free publicity

Doubling down on his assault on the RNLI, Farage told GB News viewers that he was just “pointing out the truth”. But his attempts to discredit the charity appear to have been in vain. It looks like the offshore rescue service may have seen an uptick in online donations since Farage’s outburst. Encouraging people to donate to the charity, Dr Mike Galsworthy shared:

That’s all the reason you need to donate to the RNLI. Regardless of all else, RNLI are battling to save lives. Farage is battling to save his reputation, according to what he says here. https://t.co/AD8JwEd0eA

Thank you Nigel Farage & Daily Mail for criticising the incredible work the @RNLI does to rescue migrants. Due to you highlighting their endeavours I'm now donating every month @DewsnapClaire #RNLI https://t.co/9MryJIsqIS

I return to Twitter to discover that the odious filth that is Nigel Farge is attacking the @rnli for saving lives at sea.

Right-wing attacks on the RNLI for saving lives at sea reflect just how inhumane their agenda really is. They have also highlighted that the RNLI needs our support. Anyone looking to donate to the offshore rescue service can do so via their website.