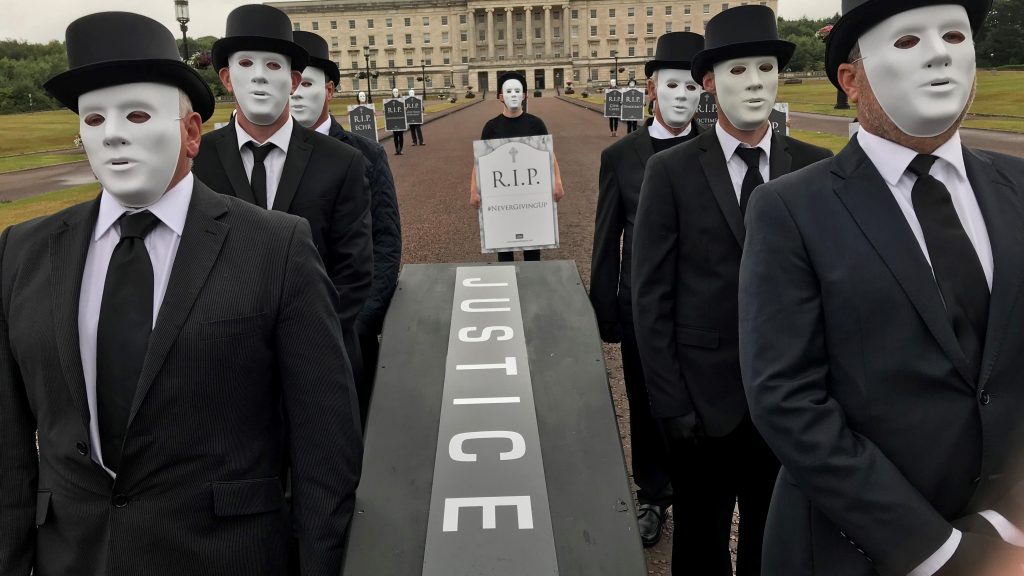 A man whose son was murdered two decades ago has branded Government plans to end ‘the Troubles’ prosecutions as “disgusting”.

Paul McIlwaine was one of a number of relatives who took part in a staged funeral procession through the grounds of the Stormont estate. They were protesting plans unveiled by secretary of state Brandon Lewis to deal with the legacy of the 30-year (1968-1998) conflict in the north of Ireland.

The protesters wore white masks and black top hats as they carried a coffin bearing the word ‘justice’ to the gates of the Northern Ireland Office building at Stormont House.

Organisers said the coffin represented the death of justice if the government proceeds with its plans.

Lewis announced earlier this month that he intends to introduce legislation to create a proposed statute of limitations which would end all prosecutions for incidents up to April 1998 and would apply to military veterans as well as ex-paramilitaries.

The proposals, which prime minister Boris Johnson said would allow the north of Ireland to “draw a line under the Troubles”, would also end all legacy inquests and civil actions related to the conflict.

The plan has been heavily criticised by all the main political parties in the north as well as the Irish government, and a range of victims’ and survivors’ groups.

“It is the most disgusting thing I have heard yet.”

McIlwaine, whose teenage son David was stabbed to death by a UVF gang in 2000 after leaving a nightclub in Co Armagh, said:

Just the very thought of what they are trying to do with Brandon Lewis’s announcement, trying to stop all legal cases, civil actions, investigations, I think it is totally wrong.

It is the most disgusting thing I have heard yet.

Brandon Lewis announced that things weren’t working in this country, but they were working. It was very slow but the answers were coming and they were damning for the security forces and the paramilitaries on all sides. That is why they have done this.

We are here in a street art protest around the issue of justice. People will know that recently the British Government made proposals around dealing with the legacy of the past.

Those proposals aim to do away with due process and the rule of law, the fundamentals of the Good Friday Agreement, the Human Rights Act, the European Convention on Human Rights.

We are seeing a powerful demonstration today in terms of saying we will not stand for this, we will not allow the British Government to bury the truth. We buried our loved ones so we won’t allow them to bury truth or accountability.

What this is about is the rule of law. The British Government stand on their own in these proposals, they have no support from the Irish Government or the Executive or any of the political parties on these islands. They are going contrary to the rule of law and democracy and they need to come back from the brink.

Thompson said international action is needed to put pressure of the British government to change course.

There will be a challenge in the courts, but we are reaching out to Irish America and the international community.

This will cause discord and disharmony, hurt and injustice, and that is not the foundation of which to build a society post-conflict.