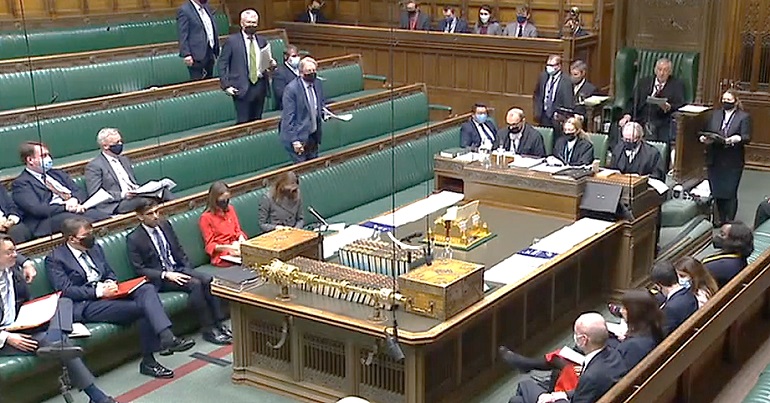 Tory MPs have been recorded groaning and laughing in parliament when a Labour MP was talking about disabled people. The Labour MP shared the video in which you can hear the Tories’ contempt on his Twitter – not that contempt from these people is anything new.

During the pandemic, the DWP increased Universal Credit by £20-a-week. But it did not do the same for people on so-called legacy benefits. These include social security like the Employment and Support Allowance (ESA). Disability rights activist Paula Peters previously told The Canary:

the Tories completely overlooked and ignored legacy benefit claimants during the pandemic… Some were also shielding. Living costs rose and disabled people couldn’t afford the most basic standard of living. …

Currently, claimants are waiting for a court decision on whether the DWP and government acted unlawfully by not also uplifting the social security payments for legacy benefits. As Disability News Service (DNS) reported, one of the claimants in the case, who is a disabled person, said of the situation:

It’s like we don’t even exist. I just think it’s disgusting.

It’s that feeling of erasing a minority group – sick and disabled people – from any help, from the public consciousness, and feeling like we don’t matter and don’t exist.

That’s how it made me feel.

Sadly, judging by the conduct of some Tory MPs in parliament recently, the claimant may well be right. Because on Tuesday 7 December, when a Labour MP raised the issue in parliament, the response from the Tory benches was contemptible.

Former shadow justice secretary Richard Burgon asked a question of chancellor Rishi Sunak about the lack of an uplift. He said:

Disabled people have been disproportionately attacked by Tory governments over the past decade… most recently through a cruel lack of support during Covid. Nearly two million disabled people were not given the £20 uplift in benefits

Burgon then asked Sunak if he would backdate the uplift for legacy benefit claimants.

In the background you can hear Tory MPs firstly groaning when Burgon starts his question. At around 45 seconds, someone actually laughs:

Sunak’s response to Burgon was mealy-mouthed at best. He said, among other things, that the government was increasing spending on accessible toilets. That’s cold comfort to the 42% of people living in a family relying on disability social security who are in poverty and probably can’t afford ‘days out’.

Tory contempt for chronically ill and disabled people is no surprise. As The Canary previously reported, Sunak made clear that the £20 Universal Credit uplift was just for ‘workers’ anyway. As we said at the time:

In other words, the Tories think sick and disabled people don’t need extra money due to the pandemic.

The Tories have shown contempt for these people for many years. Now, the pandemic has further exposed it for all to see.