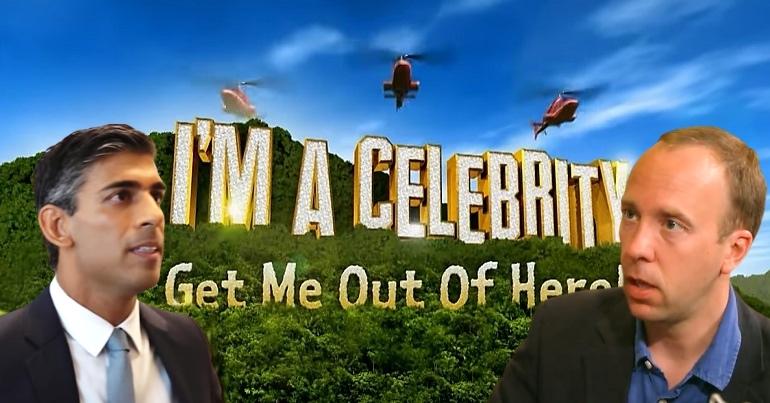 The Tories have suspended Matt Hancock, the former health secretary who presided over the government’s disastrous policies at the start of the coronavirus (Covid-19) pandemic. Their reason for doing this? Not hundreds of thousands of deaths or his wilful negligence of care home residents. The Tories have suspended him for appearing on a reality TV show.

I’m A Disgraced Politician… Get Me Out Of Here!

AFP reported that the  MP will be absent from parliament while he takes part in the latest series of ITV‘s I’m A Celebrity… Get Me Out Of Here! One previous contestant was Hancock’s Tory colleague, former culture minister Nadine Dorries. The show forced her to eat an ostrich’s anus in 2012, though that was probably of little concern to Dorries – she was used to kissing the ass of former PM Boris Johnson. However, people criticised her at the time for failing to seek her party’s permission to go on the programme. The Tories also suspended her. Poor Dorries; she was the first contestant voted off that season.

Tory chief whip Simon Hart, who is in charge of party discipline, followed a similar course on learning of Hancock’s involvement. AFP reported he said:

I have considered the situation and believe this is a matter serious enough to warrant suspension of the whip with immediate effect.

The prime minister believes that at a challenging time for the country, MPs should be working hard for their constituents.

They also said that the PM was “unlikely” to watch the show. Maybe Sunak is more of a Love Island fan?

One of Hancock’s supporters defended his involvement to AFP, saying the programme would help connect to the “politically disengaged” and show “the human side” of politicians. As it reported, Hancock was an ever-present public figure in Britain during the coronavirus pandemic. However, the Tories forced him to step down after breaching social distancing rules. He was captured on leaked security camera footage at work getting off with his advisor and former university friend, Gina Coladangelo.

He subsequently left his wife and has been reportedly angling for a political comeback. Clearly, the Tories don’t want that – hence the suspension. It would have been too much to ask for them to suspend him over his coronavirus care home deaths lies. Instead, being on the telly was too much for them – which says it all about this self-serving party.

Hancock’s book, Pandemic Diaries. The Inside Story of Britain’s Battle Against Covid, is due to be published in December. Funny that – just as I’m A Celebrity… will be plastering him all over our screens. Let’s hope his diaries include him fessing up to being responsible for countless deaths at the start of the pandemic. Highly unlikely, we know.