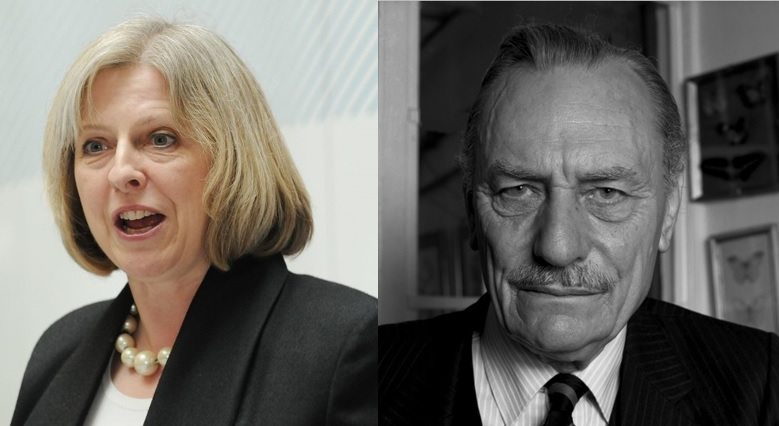 Theresa May appeared to channel Enoch Powell as she outlined a flurry of new anti-immigrant measures in her speech to the Conservative Party conference in Manchester. The response from business and campaign groups was immediate and unanimous: May’s speech was ‘chilling and bitter’ nonsense.

On April 20 1968, Conservative MP Enoch Powell gave his infamous ‘Rivers of Blood’ speech to a Conservative Association meeting in Birmingham. During the speech, in which he described immigration as an ‘evil’, and ‘the great betrayal’, he endorsed the view that:

“I shan’t be satisfied till I have seen them all settled overseas. In this country in 15 or 20 years’ time the black man will have the whip hand over the white man.”

The speech was a call for what Powell described as ‘re-emigration.’ The Conservative MP backed calls to send immigrants back to their countries of origin, along with their British-born children who had never known them. At the time, my Grandfather – a Caribbean immigrant married to a white British citizen – was trying to raise his young mixed race family in Bristol. Despite the fact that my Grandfather fought for Britain in the Second World War, and was invited to this country – Powell would have sent he, my Nan, and their children (including my own mother) back to Barbados. But Powell lost that fight, and my family and many others became as British as anybody else.

This week, Theresa May re-opened this battle. In her conference speech, she outlined plans to send back refugees and asylum seekers who came to this country having passed through other nations, or whose countries have been deemed ‘safe’ by her Home Office. She said:

“When immigration is too high, when the pace of change is too fast, it’s impossible to build a cohesive society.”

“It’s difficult for schools and hospitals and core infrastructure like housing and transport to cope. And we know that for people in low-paid jobs, wages are forced down even further while some people are forced out of work altogether.”

In doing so, she peddled the exact same myths and gossip about immigrants that Powell did in 1968. They will steal your job, their kids will get school places meant for yours and they’ll be treated by doctors and nurses before your family. Everything would work here just fine, if we only sent those scroungers home! Britain, for the British.

Like Powell, May is facing opposition from all responsible corners of British society.

The Institute of Directors, the federation of business leaders, were quick to issue a strongly worded rebuttal to the Home Secretary. IoD director general Simon Walker said:

“We are astonished by the irresponsible rhetoric and pandering to anti-immigration sentiment from the Home Secretary.

“It is yet another example of the Home Secretary turning away the world’s best and brightest, putting internal party politics ahead of the country, and helping our competitor economies instead of our own.

“The myth of the job-stealing immigrant is nonsense. Immigrants do not steal jobs, they help fill vital skill shortages and, in doing so, create demand and more jobs.

“If they did steal jobs, we wouldn’t have the record levels of employment we currently do.

“It is about time the Home Office stopped undermining business and our own government’s efforts to secure productivity growth.

“Political leaders should stop vilifying migrants and acknowledge the hugely important contribution they make to this country’s economy.”

“The Home Secretary’s clear intention to close Britain’s border to refugees fleeing for their lives is thoroughly chilling, as is her bitter attack on the fundamental principle enshrined in international law that people fleeing persecution should be able to claim asylum in Britain.”

He was joined in outrage by Allan Hogarth, of Amnesty International, who said:

“Theresa May’s claim that mass immigration has undermined public support for refugees flies in the face of reality.

“Hundreds of thousands of people in the UK have signed petitions, tens of thousands took to the streets and many more have written to their MPs to say that people fleeing war and persecution should be welcome in the UK.

“Meanwhile, the Home Secretary sets out to make it harder and harder for desperate people to claim the protection they need and the UK has a duty to offer.”

In short, from an economic and social perspective, May is as wrong today as Powell was in 1968. But like Powell, she is also morally wrong. At a time when over 4 million desperate Syrian refugees are crossing oceans, desperately clinging to dinghies, to flee a kind of carnage May couldn’t imagine in her worst nightmares, she chose to send them a message of contempt rather than hope. At a moment when Germany and other leading EU nations are reaching out to help, May is hauling up the drawbridge of Fortress Britain. If she or Powell wanted to see these so-called ‘Rivers of Blood’, they’ll find them in Damascus, not Dartford.