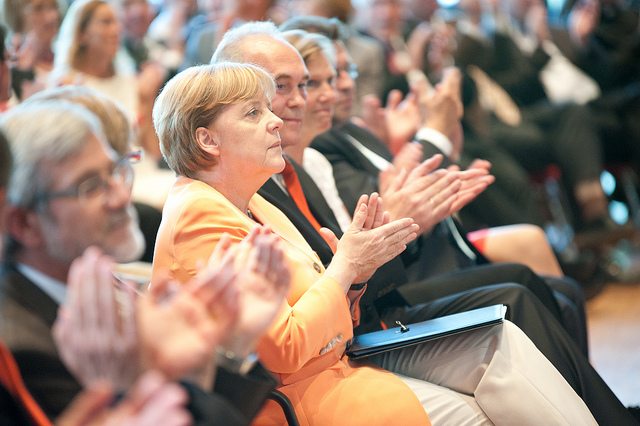 Angela Merkel’s liberal refugee policy has thrust her into the spotlight. Her vice-chancellor, Sigmar Gabriel, has predicted that a million refugees might arrive this year. Merkel said she wants to show Germany’s “friendly, beautiful face” to the world. She is now a likely candidate for the Nobel Peace Prize.

Commentators have applauded her stance from a humanitarian perspective, but questioned the supposed negative economic impact.

However, the German economy is in fact the primary reason for her refugee policy. It’s not a question of how Germany will fare with the huge influx of people, but how it would fare without it.

What would a truly benevolent refugee response look like? First, you would seek to minimise deaths outside of war zones. Hence, you would establish safe processing points in nearby Syria and allocate funds to transport refugees directly to Germany, to prevent the many that have drowned at sea or died on the long and perilous journey. Second, you would prioritise the most vulnerable: families with children.

What does Angela Merkel’s refugee response look like? It is a ‘first come first serve’ policy functioning to prioritise the richest, who can afford the relevant transportation to reach Germany. It prioritises the young and single who are in a much better position to make the dangerous journey. It sidelines the most needy.

Germany has booming exports, while simultaneously facing a troubling demographic situation. Its aging population needs a boost in young consumers to increase aggregate demand. On the flipside, 46% of German employers are currently having trouble recruiting. Over 75% of larger companies face worker shortages. While many of these jobs are for skilled positions, the policy prepares for the real demographic crisis, which will hit in 2025.

The German economy is in dire need of young workers and consumers. While Merkel’s refugee policy is commendable, especially compared to the UK response, money is the primary motivation.